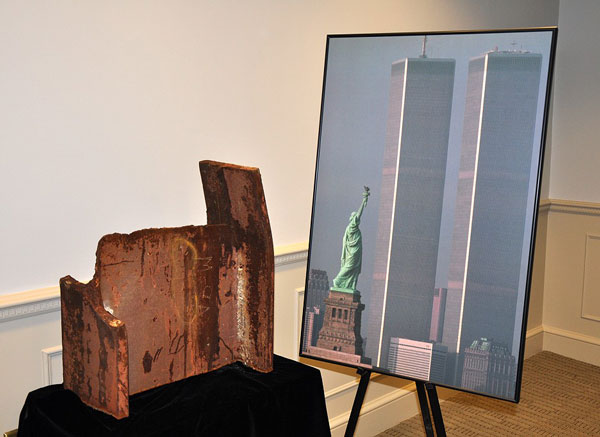 Purdue University North Central has become the permanent home of a section of a steel beam that was recovered from the World Trade Center in New York, after its collapse on Sept. 11, 2001. In remembrance of the 10th anniversary of that day, PNC will place the steel on permanent display in the Library-Student-Faculty Building Cybercafé, Room 114, off the first floor foyer.

It will be unveiled during a brief ceremony on Sept. 11. The public is invited to attend. The ceremony will begin promptly at 7:30 a.m. A moment of silence will be observed at 7:45 a.m. - the time the first plane struck the World Trade Center - and again, 18 minutes later at 8:03 a.m., the time when the second building was struck. A violinist will offer two works prior to the second moment of silence. There will be time for questions, answers and discussion. The formal event will end at 8:30 a.m.

Light refreshments will be served.

The public will have the opportunity to view the piece until 2 p.m. that day. The CybercCafé is equipped with comfortable chairs and couches, so that the guests who come to view the I-beam may stay to think and reflect.

"We are honored to have received this priceless artifact that was part of one of the most meaningful events in our nation's history," said PNC Chancellor Dr. James B. Dworkin. "It is simply breathtaking to have this on our campus."

PNC filed a request in November, 2009 with The Port Authority of New York and New Jersey, to receive a piece of steel salvaged from the World Trade Center buildings, explained Judy Jacobi, PNC assistant vice chancellor of Marketing and Campus Relations.

After conferring with Chancellor Dworkin, Jacobi was inspired sent a letter and completed an application through the Port Authority to receive an artifact from the Word Trade Center. It did not take long to hear that the PNC request was approved. It was another 18 months before the beam arrived on campus.

The beam itself measures 36 inches long, by 18 inches wide, by 11 inches deep and weighs 176 pounds.

The Port Authority, owners of the World Trade Center steel, accepted applications from cities, towns, museums, fire and police departments, schools and similar organizations to submit applications for pieces of steel to be used as lasting memorials to the 2,973 innocent victims of the Sept. 11 terrorist attacks. Requests were received from across the country and around the world.

Port Authority Executive Director Christopher O. Ward explained, "The best way we can honor the memory of those we lost on 9/11 is to find homes in cities and towns around the nation for the hundreds of artifacts we've carefully preserved over the years."


PNC will keep the steel I-beam on permanent display. The public may visit at any time the building is open - Monday through Friday from 7 a.m. to 11 p.m. and Saturday, 7 a.m. to 5 p.m. The Library-Student-Faculty Building is closed on Sundays.

The steel will be displayed near the series of oil paintings named, "New York, New York" that were created in tribute to the victims of Sept. 11, the rescue workers and the residents of New York City.

They were created by Jason Poteet, a graduate of Marquette High School in Michigan City. Poteet had been scheduled to attend a Morgan Stanley Investments training program in New York City in September, 2001, in the North Tower of the World Trade Center. On Sept. 6, 2001 his training session was postponed, thus ensuring he was not in the World Trade Center on Sept. 11. He volunteered his time at Ground Zero and returned home with new inspiration for his paintings.

Parking is free on the PNC campus, but guests are asked to please not park in the "A" or reserved spaces. Parking during the academic year may find parking more available on Thursdays, Fridays and weekends.

Further information may be obtained by contact in Jacobi at 219.785.5200 ext. 5593. Persons with disabilities requiring accommodations should contact Jacobi.

Photo: A piece of an I-beam from the World Trade Center will be unveiled at Purdue North Central on Sept. 11