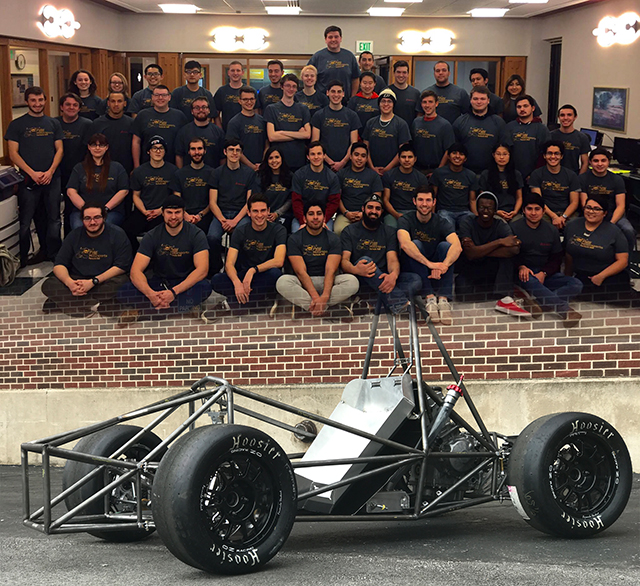 Burning the midnight oil is mere child’s play to a group of Purdue University Northwest students who have spent the wee hours of many mornings on the Hammond Campus fueling their passion of designing and building a Formula One race car.

Their PNW student organization, Formula SAE, numbers more than 40 members. They are primarily mechanical engineering and technology students, some of whom are known to remain on campus well past 3:30 a.m. in an engineering laboratory, preparing for a competition that already has paid huge dividends for several of them.

Despite carrying full course loads, club president Josh Wachowski of Schererville and other Formula SAE members frequently spend 60+-hour weeks working to turn their dream into a reality that will manifest itself May 10-13. That’s when the car they have designed and assembled competes in Formula SAE Michigan at the Michigan International Speedway outside Detroit.

Crafted by college students from across the globe, the competing vehicles will be tested for endurance, speed, handling and acceleration. And before any car’s rubber hits the track, each team will compete in static categories based on design, cost and fuel efficiency.

Though Purdue Northwest’s College of Engineering and Sciences, College of Technology and a wide range of local sponsors, including faculty and staff members, have been generous in their support and assistance, club members have had to raise more than $25,000 to cover manufacturing and parts costs.

Attracting job offers
But no matter how the Purdue Northwest team fares, six of its graduating team members already have become winners by accepting job offers—two with Chrysler, one with General Motors and three in non-automotive engineering capacities—in part due to their participation in the Formula SAE venture.

“We have discovered that if a company sees ‘SAE’ on your resume, you’re likely to get a job offer,” Wachowski, a 22-year-old junior mechanical engineering major who has secured a summer internship with the Ford stamping plant in Chicago Heights, said. “Every time we go to a job fair and say we’re part of our school’s Formula SAE team, the employer tells us, ‘We know all about SAE.’”

“These students are highly-motivated, well-organized, self-sufficient, self-organized and willing to sacrifice their time and leisure activities for this project; actually, this project has become their leisure activity,” Purdue Northwest Professor of Mechanical Engineering and faculty advisor Masoud Mojtahed said. “To manufacture a car from scratch with limited resources, time and knowledge requires dedication, a strong will and a great amount of sacrifice.”

Wachowski, who hopes to start a career in the automotive industry when he graduates in spring of 2018, was a member of the first PNW team to compete in Formula SAE Michigan last spring. The lessons learned have been invaluable preparing for the 2017 competition.

Labor of love
“We learned last year that it’s all about engineering and weight of the car,” he said. “The most successful cars in the competition weigh between 350 and 450 pounds. Ours was 623 pounds last year. We’re hoping to take our car to Michigan this year at less than 500 pounds.”

For now, it’s the home stretch time of fine tuning and test drives in the campus parking lots.

“There’s been a lot of blood, sweat and tears go into this project, but we love it,” Wachowski said.