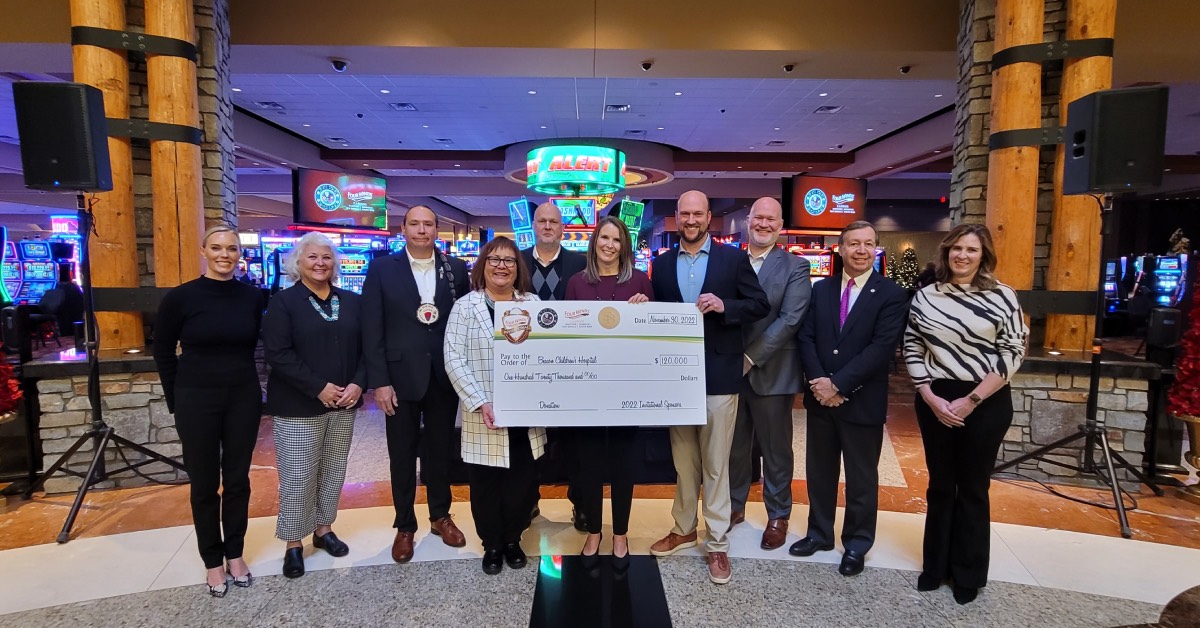 The Pokagon Band of Potawatomi Indians and its Four Winds® Casinos are pleased to announce that a donation of $120,000 was presented to Beacon Children’s Hospital today during a check presentation ceremony at Four Winds South Bend.  The donation is a result of the proceeds from the 2022 Four Winds Invitational which took place from August 12 through 14 at South Bend Country Club.  Beacon Children’s Hospital will use the funds for a Quad Cab NICU Transport to safely move premature infants along with Beacon’s Specialty Care Team.  The Four Winds Invitational is part of the Epson Tour, which entered its 42nd year of structured competition in 2022 and is the most established women’s qualifying tour in the world as the one “Road to the LPGA.”

“The Pokagon Band is very proud of our continued sponsorship of the Four Winds Invitational and our annual donations to Beacon Health System and Beacon Children’s Hospital, which now total $892,500 over the past eleven years,” said Rebecca Richards, Tribal Chairwoman for the Pokagon Band of Potawatomi.  “We would like to thank everyone who was involved in supporting the tournament and helped to make this donation possible including the LPGA Epson Tour, South Bend Country Club and its members, our sponsors, team members, volunteers, and vendors.”

Frank Freedman, Chief Operating Officer of Four Winds Casinos added, “Since the inception of the Four Winds Invitational in 2012, we have continually strived to raise the bar.  From increases in prize money over the years, to the relocation of the tournament to South Bend Country Club in 2021, we’ve consistently worked to improve the tournament for both players and fans alike.  We are very proud to be part of this important event that has been so well received by the South Bend community, and thankful to everyone who has helped make it so successful!”

Jen Tonkovich, Director of Women and Children’s Services for Beacon Health System said, “We would like to thank the Pokagon Band, its Four Winds Casinos, and all of the donors from the community for their continued generous support over the years.  Receiving the proceeds from the Four Winds Invitational has not only helped us acquire life-saving equipment, but also plan for the future and identify ways we can better serve patients and families.”

About the Four Winds Invitational

The Four Winds® Invitational was established in 2012 as part of the Road to the LPGA®, and is sponsored by the Pokagon Band of Potawatomi Indians and its Four Winds® Casinos.  The tournament features a field of professional women golfers from around the world.  More information is available at:  www.fourwindsinvitational.com.

The Pokagon Band of Potawatomi’s sovereignty was reaffirmed under legislation signed into law by President Clinton in September of 1994.  The Pokagon Band is dedicated to providing community development initiatives such as housing, education, family services, medical care and cultural preservation for its more than 6,000 citizens.  The Pokagon Band’s ten-county service area includes four counties in Southwestern Michigan and six in Northern Indiana.  Its main administrative offices are located in Dowagiac, Mich., with a satellite office in South Bend, Ind.  In 2007, it opened Four Winds Casino Resort in New Buffalo, Mich., followed by Four Winds Hartford in 2011, Four Winds Dowagiac in 2013 and Four Winds South Bend in January 2018.  The Pokagon Band operates a variety of businesses via Mno-Bmadsen, its non-gaming investment enterprise.  More information is available at www.pokagonband-nsn.gov, www.fourwindscasino.com and www.mno-bmadsen.com.