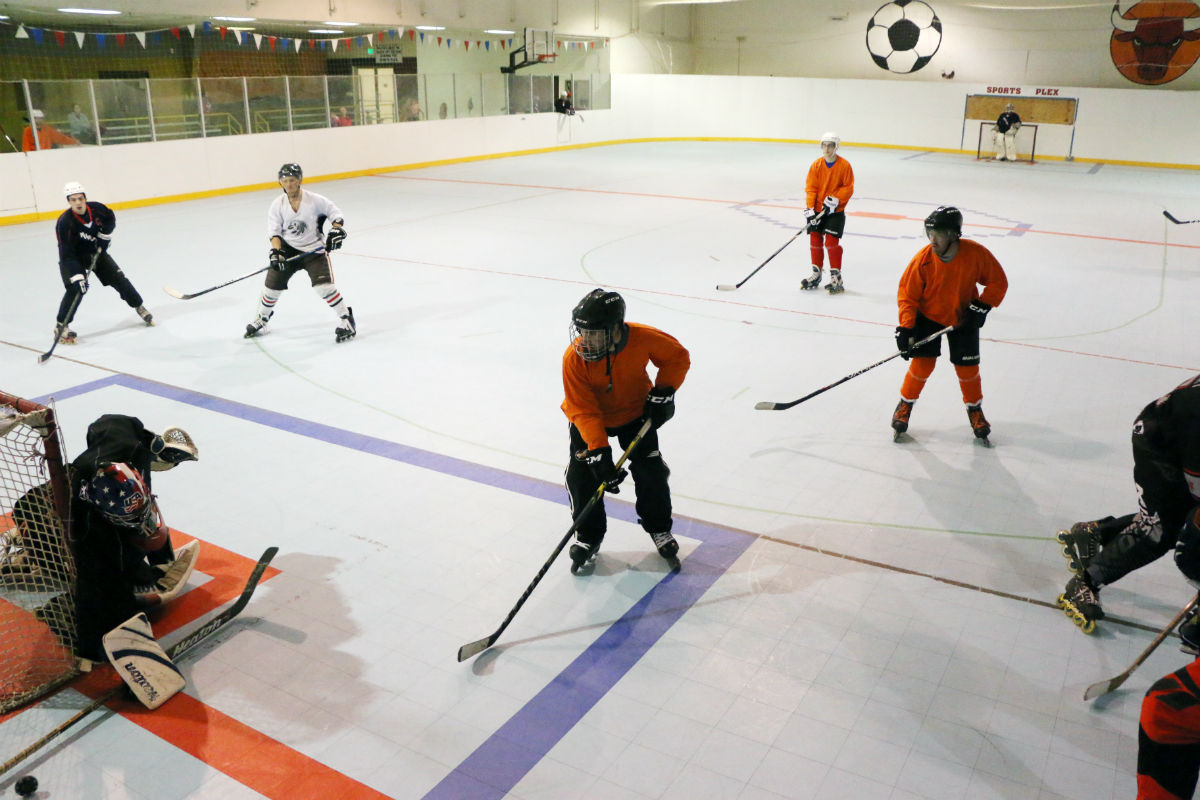 A new roller hockey league in Portage is bringing Roller Hockey back to Northwest Indiana. Teams that feature colorful names like The Majestic Unicorns, StoneCutters, Iceholes, and The Muricans meet twice a week at Portage's Inline Sportsplex to face off and have some fun.

Carlos Gutierrez, goalie for the Muricans, and the commissioner of the league oversees every aspect that goes on at the rink. On game nights, he shows up about 2 hours before game time to sweep up, and clean the floor. He doesn’t leave until every other player has packed up their car for the night. Usually, that’s close to 10 p.m.

“It’s definitely a struggle because right now I’m in nursing school, but in the end, it's all worth it.” he said.

And somewhere in between, he fits in blocking pucks for the Muricans and other teams that are short a goalie. Gutierrez's ultimate goal is to help restore The Sportsplex through improvements made possible by the league dues.

“It’s going to be a step by step process," he said. “We have hockey boards coming in a couple of weeks. The next big project after that is fixing the arena doors, and the netting above the glass, because the puck can get through our netting pretty easily.”

Every team makes the best of the rink and plays despite the disrepair, enjoying every moment. Making sure everyone has fun is a large part of what keeps Gutierrez going. He became involved when he started playing at The Sportsplex.

“We had a couple of people who were playing here for a while and gave me tips on ways I could do this. I got some input from them and then said, 'let’s see what we can make of this!' "

That’s how a 9 team hockey league is born. Some of the players have the experience of a handful of games, other players started when they were in high school or even before that.

The league is divided into two categories to accommodate the varying levels of skills among the players. The Sportsplex just requires the dues for leagues or open sessions and proper hockey gear to play.

Patrick Derr, a Portage newcomer to roller hockey, enjoys the new opportunity to play, “It’s awesome. It’s a great workout. It’s something none of us have ever got to do because there’s no other leagues around here.”

The wide range of experience in the league even stretches to players with coaching backgrounds. Jeff McGovern has taught elementary student and high schoolers how to play roller hockey, now he plays goalie for the Puckin' Gingers and helps coach the team.

“They’ve been learning pretty quickly. I’ve been really trying to help them out. They’ve been thinking about what we’ve been discussing, and everything came together for this last game,” he said. “I like to promote the sport. I’m originally from the Michigan area, and seeing the Blackhawks do well, has helped to grow the support down here. It’s a beginner men’s league, and hopefully, it will grow from here. Hopefully, we get more interest.”

“I’m trying to get hockey back to being big in this area. It’s not that easy. I know a lot of the gear is expensive, especially for goalies,” said Gutierrez.

A portion rink rental time by the league is to provide opportunities for new players to practice.

“Right now, we’re not planning on doing a league in the summer, but we are planning to do open sessions twice a week. Get people in shape so when the league starts again in the fall, “said Gutierrez.

Now that the adult league is more established, Gutierrez is looking to create a league for kids under 18 who are interested in playing. He’s working with the local ice rinks to bring roller hockey to kids for the spring and fall.

“I’m trying to get kids here from the Valpo Ice Rink since the snow has melted. I’m trying to get more kids out here to play so they have somewhere closer that’s not all the way to St. John for hockey.”

Kids over 7 can head to the rink on Saturdays to play in the open sessions. Parents must sign a waiver and there’s a fee of $10, which is set to change to $5 in April. The best way to watch for open sessions is on the Sportsplex Inline Hockey Facebook page.

Open hockey (Rat Hockey / Pick Up games) will be on Mondays and Wednesdays starting April 10th, and the league has room for more.

"We definitely have teams hoping for more players for the next session," Gutierrez said.

For information about how to join the league, visit Sportsplex Inline Hockey on Facebook.

Check out our gallery here!