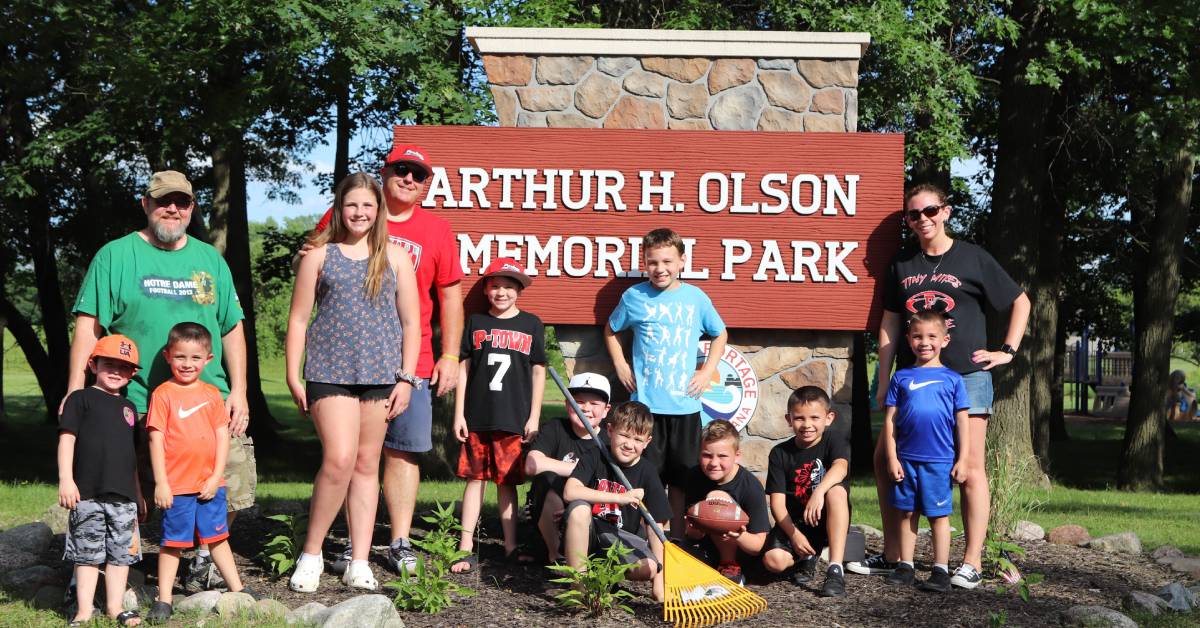 With opportunities for teambuilding and developing new skills, it’s not uncommon for young athletes to learn both the rules of the game and life lessons during their days in the dugout and on the field. The Portage Pop Warner Mighty-Mites Division II Football Team took this concept a step further by encouraging their athletes to take part in a volunteer clean-up of three local parks. The most recent clean-up took place Wednesday afternoon at Olson Park in Portage and was part of the group’s efforts for the Pop Warner Little Scholars program.

“Pop Warner wants their athletes to be focused in the classroom and on the field,” said Head Coach Derrick Arnett. “This program takes into account their grades and extracurricular activities, and then allows them to earn college scholarships when they graduate based on those efforts.”

Arnett’s team took to the playground with rakes in hand, ready to spread new mulch across its entirety and give it a fresh look. Team members Jackson Arnett and Jonathan Espinoza were more than happy to help.

“It feels good because we’re doing something good for the people who come to this park,” Jackson said.

The boys have an impressive record, having not lost a game in the past two years. Coach Arnett said he wants to make sure their level of expectation and commitment transfers from the field to their every-day lives.

“When we finish, the parks are nicer for us and other kids to play on,” added Espinoza.

“Football brings you many lessons as a young man,” Arnett said. “We want to teach the boys how to be team players on and off the field. Coming out here and donating time to the community is the perfect way to show them that.”

Jennifer Espinoza, Senior Registered Financial Client Associate for Benjamin F. Edwards (BFE) and Associate Board Member for Portage Pop Warner, was also there to help. She and her team at BFE support the values Pop Warner instills in its players.

“To us, it’s very important that these players are not only good athletes, but good kids all around,” Espinoza said. “We want to start teaching them those values early.”

She and her team comprise the first BFE office in the state of Indiana, and though they may be small, they aim to give back to the community as much as they can.

“We have an office of seven, and three of us are board members for three different YMCAs,” Espinoza said. “You can’t go to an office of 40 people and find that many!”

The group’s local roots no doubt contribute to their passion for service, inspiring them to make the Region a better place with their volunteer efforts.

“We’re all from Northwest Indiana, so community involvement is important to this whole office,” Espinoza explained.

Espinoza said BFE is behind their efforts one hundred percent and encourages all of their employees to be active in the community in whatever ways they see fit.

“They’re very supportive of us as an organization, and really give us free range to get involved with what we want,” Espinoza said. “Right now, we’re just trying to support each other as individuals and coworkers in whatever we’re involved with separately, but we’d love to start getting together and doing more as a group moving forward!”

To learn more about Benjamin F. Edwards and their community efforts, visit https://benjaminfedwards.com/.