The safety net for Porter County children at risk just got a little wider earlier this month, as six new Court Appointed Special Advocates were sworn in to officially begin standing up for the best interests of children who have experienced abuse or neglect.

“What struck me is how, for each of these women, it became clear that it was the right moment in time in their own lives to make the step toward doing something for children in need,” said Sarah Fink, Porter County CASA program director. Fink noted how each of the volunteers became connected to the program for different reasons and in different ways, and that the timing is good due to an increased amount of children in need of services lately.

“The one thing that every single one of our CASA volunteers has is a heart to do something for someone else that will have a positive impact. As a CASA, that someone is a child, which makes it all the more poignant,” Fink said.

The swearing-in day for Porter County CASAs is an emotional one, both bittersweet and joyous for many. In their own words, here’s what a few of the newest CASA volunteers had to say about their journeys so far in child advocacy.

I have always wanted to be involved in the child welfare system, whether it be through fostering, volunteering, or something else. I thought CASA would be a great first step. I have had the opportunity to be a stay-at-home mom for the last 16 years and felt as though it was time for me to give back to kids who maybe don’t have that support in their lives. I had no idea there were so many children in need here in Porter County. I am really looking forward to making connections with children and their families and hopefully seeing growth, healing, and positive outcomes.

During my first day of observation in the court, I witnessed parents who were in jail and couldn’t care for their kids. I tried to imagine what circumstances led to the choices that were made by everyone involved, and how we can work to break the cycle that so many of them seemed to be in. I’m looking forward to the first time I have a case in which a parent is successfully reunited with their child.

I decided to get involved in CASA because I saw it was a great opportunity to expand my horizons and get experience within the foster and juvenile system. There are always going to be children in the system who do not have a voice, or who do not have a way of expressing their voice the way they need to. As a CASA, you are there to be that support system and voice, and make sure they get the best outcome.

I wanted to become involved with the CASA community to hopefully make a difference in a child’s life. I would encourage anyone who has a few hours a month to consider taking the CASA class. It will enrich your life as much as you will help a child. Everyone needs a voice. My hope is I will be able to do just that.

A friend of mine is a CASA and she has been talking to me about it for a while. I felt like God was putting it on my heart to learn more about the program, the people it serves, and eventually to volunteer. If I can play a small part in helping a child during one of the most difficult times of their life, then it will be worth it. It was a really neat experience to be sworn in. I feel honored to be a part of the CASA program. 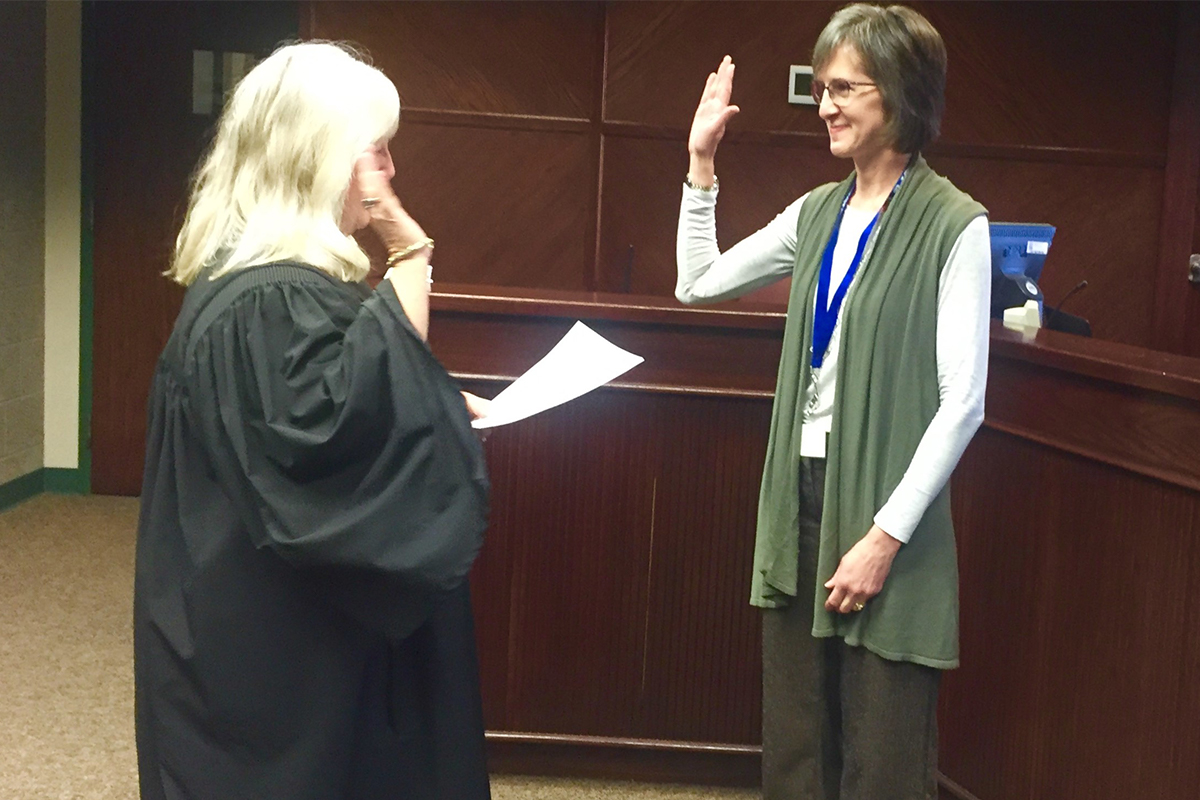 CASA Dawn Jeglum Bartusch (pictured above) was also sworn in later in March, after returning from traveling abroad with her students from Valparaiso University.

Fink said the work of a CASA is constructive in many ways, despite some of the tragic situations that land a child in the system.

“Every child I have met is such a beautiful heart, with so much potential, and many times more resilient than their circumstances would indicate. They are smart, they are survivors, they are deserving of more, and inspiring,” Fink said. “The beauty about the CASA program is that it is about the child. Only the child. In fact, it teaches you about life and more about yourself than you might imagine. Advocating with compassion for a child’s right to be safe, to be treated with dignity and respect, to grow in a safe and nurturing environment, is an easy right to stand behind. It is an honor to work on their behalf."

Cissie Wardell, the Porter County CASA program volunteer coordinator, echoed Fink’s comments and added, “The two best things about CASA are having a child tell you she loves you, and sharing the tears of joy when a child is reunited with her parents, or is adopted and gets her forever home.”

While five new CASAs were just sworn in, the wait list for additional advocates for at-risk children continues to grow. The next training class for new volunteers will be in May. To schedule an interview or learn more about the Porter County CASA program, or to join the more than 60 trained volunteers, call 219-464-9585 or email casainfo@fysb.org.