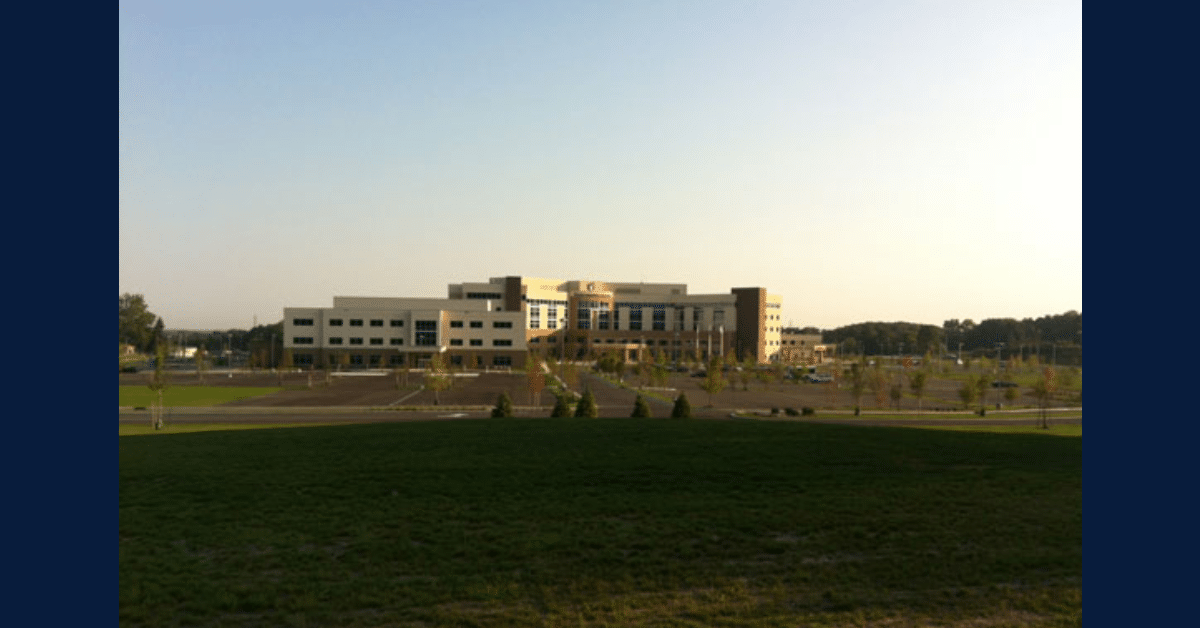 Porter Regional Hospital made a historic move to its brand new facility in 2012. This piece below includes the significant moments documented throughout the transition into Porter's Valparaiso location.

95 patients were successfully transferred to the new facility, with the last patient in at 10:45 am. The entire process was completely calm and went much quicker than expected. “Our folks have done phenomenal,” stated Porter CEO Jonathan Nalli. “We’re very pleased at the progress we have seen.”

“I can’t speak enough about the preparation that took place the last 18+ months regarding this day. In addition to it, I need to applaud the work thus far of, not only all of the Porter associates and medical staff members, but the Prompt and Superior ambulance officials, the Lutheran Health Network ambulance officials that aided us, as well as a number of local police, firefighting, EMS, Hazmat teams and INDOT that have brought forth incredible collaboration…the attitude, the mindset, the energy, the leadership of, not only all of the Porter associates but all of the partner agencies are allowing us to deliver this ahead of schedule.”

The move was controlled via two command centers, one at the origin hospital and one at the new facility. The mood inside both centers was very calm and coordinated. “We don’t operate in chaos,” Nalli stated, discussing the communication taking place between the individuals in the room, via phones and poly-coms between command center origin and command center destination, via live tracking on computers, and from people in each room whose presence there was to make sure every step was taken care of. “It’s actually communicative.”

“The energy in the origin hospital, there are a lot of individuals who are excited to be working their last shift as the final caregiver of the department. They’re taking pictures, they’re signing the wall, they’re toasting their Coca-Cola and coffee to wonderful times in the past. You’ve got individuals here at this hospital, I have never felt a more energetic and lively buzz in my entire career as a hospital administrator.”

The day was not without a few hiccups, including a malfunctioning radio, a battery on one of the communication phones that wouldn’t hold a charge, and a piece of equipment that wasn’t scheduled to be put on a “hot truck”, equipment transfer truck, that ended up needing to be transferred via the hot truck. “What I have been extremely excited about and appreciative of is that when an issue or opportunity arose, it was handled in a matter of minutes. I attribute that to phenomenal planning, back to the stakeholders involved…when those few glitches occurred, they were handled immediately and so it did not interrupt any part of the transition.”

Not only do patients need to get used to new surroundings, Porter employees are also getting to know their new home, helping each other along the way. “Our first ER patient was met with about 6 caregivers,” Nalli shared. “People are working together to become even more acclimated with their surroundings.”

“We continue to remain on track and on schedule…making sure safety is of our utmost importance.”

For those wondering about the campus at 814 LaPorte, "over the next week or so, you will see a sweep occur. After that, we have an auction company that we have retained out of Chicago, that will take all of our large equipment to Chicago," Nalli said. The company will parse through the remaining equipment, tagging and dividing them into lots. Following that, there will be a day where associates can come browse the remaining equipment for purchase, another day where the public can browse and purchase, and then a third day where non for profits will come in and obtain what they would like at no cost.

After that, the building will be completely secured and a demolition schedule will be worked out. Once the demolition is completed and soil testing deems it safe, the property will be turned over to Valparaiso University.

After more than 18 months of careful planning and coordination, the Porter move began promptly in the early morning hours Saturday. The LaPorte Ave campus closed its doors, while Porter Regional Hospital lit up its exterior sign for the very first time. Three flags were raised in honor of the opening by Jayna Lasky and Jerry Scott, Porter engineers.

Thirty-five ambulances will transport patients throughout the morning and afternoon, local vehicles and ambulances brought in from surrounding areas to ensure that service in Porter County would not be affected. “Everyone has been wonderful to work with,” shared Karen Keltner, Porter Marketing and Communications. One of the vehicles is a Neonatal Intensive Care bus that will carry each of the NICU babies to the new facility one at a time.

Critical patients were slated to move first, beginning with ICU, 2 West patients, and NICU. This move is a bit unique, as in addition to transporting patients door to door, EMS meets the patient in their room, transports them to the new facility, and delivers them to their new room at Porter Regional Hospital.

“It’s a collective effort to move the hospital, with Prompt ambulance, Superior, and then we also have Porter EMS individuals helping to do the transfer,” said David Franks, District Manager for Prompt’s South Bend base.

“Inside of the support trailer, we have an on-board monitor that tells us where we are at with every patient move, how much time has elapsed since the first patient was moved, and we can continuously see which patient’s next on the roster to go,” shared Nick Jorkon, Support Services Manager with Prompt Ambulance. “It’s very integrated with every ambulance service that is here- Prompt, Superior, and Porter. It keeps us up-to-date on everything that’s happening.”

Porter staff, volunteers, and well-wishers gathered for a toast to commemorate 73 years of service in the downtown Valparaiso location. To read more about the toast, including sentiments from Porter CEO Jonathan Nalli and Hospital Chaplain Mike Porter, click here!

The old Porter signage was removed from the LaPorte campus hospital and parking garage, with help from Steindler Signs. All signs indicating that the building on LaPorte Ave is a hospital had to be removed by 6 am on August 25, as that’s when the downtown Valparaiso campus officially closed its doors and the new Porter Regional Hospital opened for business.