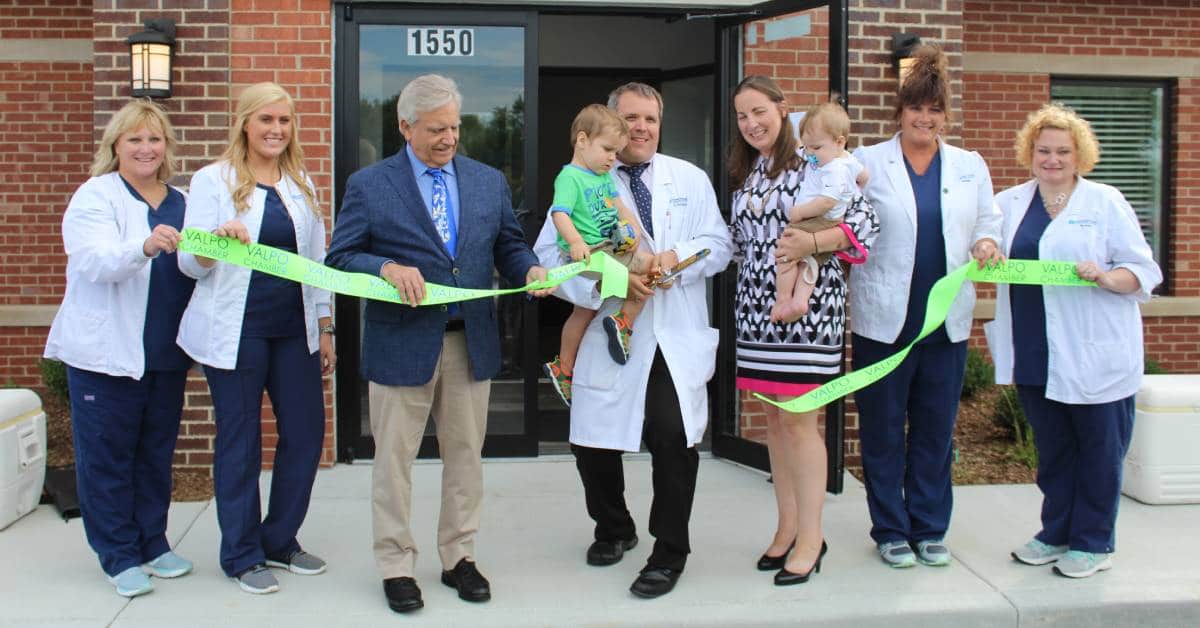 Porterfield Family Chiropractic celebrated the grand opening of their new 4,000 square foot office on Friday. Dr. Ryan Porterfield and his staff cut the ribbon on a new period of growth, and invited visitors to tour the new location.

Situated on 1550 Clark Drive in Valparaiso, Porterfield’s new home is 300 percent bigger than their old office. Bigger spaces, three more adjustment rooms, and more amenities mean an improved workspace for Porterfield and his team, and a better experience for their patients. For Porterfield, the most exciting aspect is the opportunity for growth.

“This is going to allow us to expand, and even bring in another doctor,” he said. “It’s about that promise for growth, and the prospect of getting out and doing more things. We want to add more services for patients, but we couldn’t really do that at our old office because we were just so boxed in.”

Porterfield had been contemplating the expansion for the last few years. Eventually, his wife Elisha Porterfield helped make the decision for him.

They found the land, broke ground, and finally finished construction in early July. Porterfield drove by the building plenty of times as it was going up, but his wife kept him from going inside, wanting to surprise him with the scope of the expansion. He only saw the interior shortly before they started moving in and seeing patients.

“It was really cool to see the final product,” he said. “She knows what I like and how we’re running, so it was easy for her to fit those parameters and get a great job done. We’re still doing some finishing touches. She has a bunch of art she’s going to put on the walls and I haven’t seen that yet. t’ll be a huge surprise for sure.”

The patients who toured the new facility expressed just as much surprise as Porterfield. Sarah Gasienica started seeing Dr. Porterfield when he first opened for business and said she is thrilled to see him expand.

“I absolutely love this and can’t wait to see what he does with this space,” she said. “I’m so proud of him. His treatment’s made a huge difference in my life. When I first started seeing him I was miserable with migraines and was about to go on disability. Since then, I’ve been promoted three times at work. He’s a miracle worker.”

Joel Troxel, a patient since 2017, agreed with Gasienica.

“I’ve been a patient long enough to see the practice grow, and walking into the new facility it’s easy to see what a huge step up it is,” he said. “It’s really going to accommodate more services, I can tell it’s going to be a great experience here.”

To learn more about Porterfield Family Chiropractic, visit them at www.valparaisochiropractor.com.