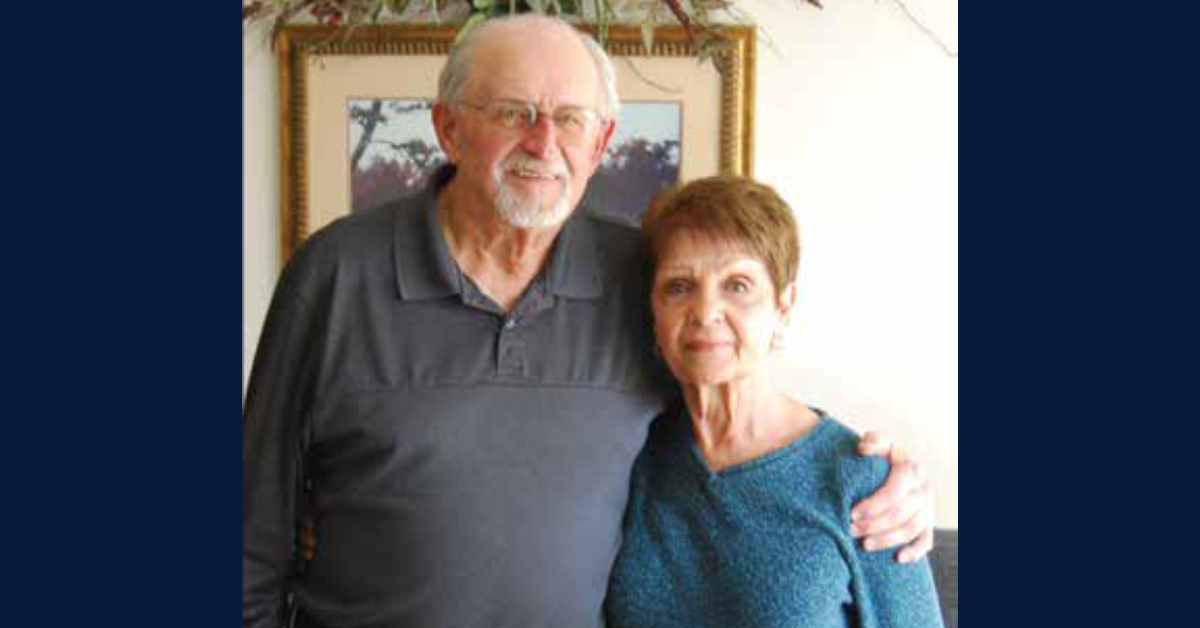 Thomas Yoder has always had an artistic eye. Whether painting portraits or growing flowers – he found his calling and passion among beautiful things. But some experiences in life aren’t as pretty – and cancer is one of them.

A few months ago, Tom’s doctor delivered the difficult news that his cancer had spread and was throughout his body, including his bones and joints.

“Talk about a bombshell when he told me,” Tom said.

He had always been active and healthy, and definitely not appearing the 87-years old that he is. One thing Tom has already learned is to take each day as it comes.

“I grow into this,” he said. “Like something is new every day. You don’t really know what to expect exactly.” And that’s when his Center for Hospice Care nurse reassured him, “We want you to have a good quality of life – to do the things you love and spend time with the people you love.”

And that is Tom’s goal, each and every day.

Tom grew up in Middlebury, where he was a meat cutter at his family’s grocery store on Main Street. By the late 1970’s, Tom was managing Everett’s Grocery Store in Goshen. He was a single dad with two daughters and a son. He couldn’t help but notice an attractive frequent customer who had two sons and one daughter, and was also single.

Recently, Tom and Beth celebrated their 44th wedding anniversary. Their “Brady Bunch” family remained in the Goshen area where Tom discovered and pursued his many artistic talents.

Tom tried his hand at painting and had a few pieces he showed to Martin Stevens, an Elkhart Art League teacher. Martin said that Tom should do more of it, and so he did – for 12 years. Tom entered art competitions where he won best of show and even judged a few shows.

“I started doing commission portraits,” Tom said. “I probably did 40 to 50 of them in the Middlebury area.”

Even though that was quite a few years ago, many of the paintings have recently resurfaced. One by one, Beth brought pictures into their living and dining room – still-life paintings and portraits, lovingly painted years ago.

“My brother’s daughter posted a painting on Facebook the other day,” Tom said. “She said, ‘You painted this picture of me when I was a young girl.’”

He wasn’t sure until he looked closely at the painting and realized that it was one of his. Another family in Middlebury commissioned Tom to paint portraits of their kids many years back. Members of that family have been taking pictures of those paintings to show Tom. Although painting lasted for years, Tom’s creative pursuits found a new direction.

Everett’s Grocery Store sold more than groceries, it also had a garden center. When Tom was ready to retire, a friend at Everett’s told him they were looking for someone to manage the garden center. Because Tom had always liked flowers and had dabbled with gardening while in Middlebury, he decided to try it.

“We had a little makeshift garden center that didn’t amount to a whole lot. I think they did about $60,000-$70,000 in business a year,” Tom shared. “When I took it over, it started increasing. We moved the garden center across the street to a nicer facility and built a new building and added a greenhouse.”

“A couple years later I talked the owner into putting in another greenhouse and business was really starting to boom,” Tom said. “The last three years we were open we were doing over a quarter of a million dollars worth of business each year. We sold a lot of flowers.”

When the garden center closed, Tom realized he didn’t want to buy and start up something new. However, another friend approached him regarding a new artistic endeavor – one that incorporated his love of gardening.

“Goshen News is looking for someone to write a gardening column,” Tom shared. He had never written anything like that, but he drafted what he thought would make a good gardening column. “I took it in and met with the publisher and editor. I explained that I wrote this as a kind of introduction. They read it and said they would make it my first column.”

That was in 2009. His first column began, “Well folks, here it goes, my first attempt at writing a column. No, I’m not a journalism major, nor do I have a degree in horticulture, but I do have a love for flowers.”

With those words Tom grew a faithful following and had binders brimming with newspaper columns—all expertly organized by date. Tom was writing the column up until Christmas 2018.

It’s evident that Tom takes great pride in the beautiful things that filled the room where we sat. He’s taken great joy in the work he’s been involved in over his lifetime. As people approach him with copies of portraits he’s painted or comments about his popular newspaper column, Tom realizes how impactful his work has been on people around him. With Center for Hospice Care helping improve his quality of life, Tom has been able to enjoy these precious moments and to continue to share his talents with the new people he meets.