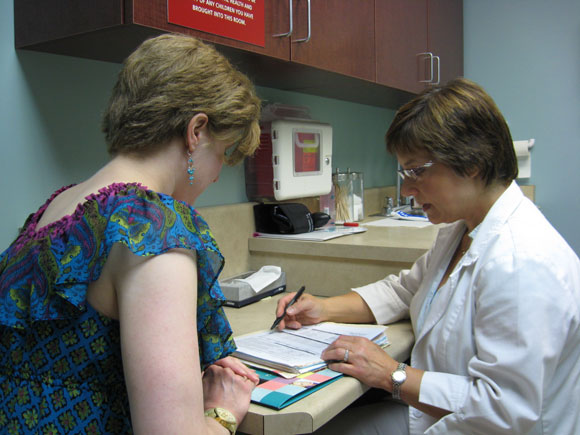 The Harmony Prenatal Test, which has only been available in Northwest Indiana for a little more than a month through Integrated Genetics, a subsidiary of LabCorp, is non-invasive, highly accurate and can detect Down syndrome and Trisomy 13 and 18 in unborn children as early as 10 weeks into the pregnancy, according to Lisa Loudenber, a certified nurse midwife with Physicians For Women in Valparaiso.

Using a standard blood draw, the test isolates the free fetal DNA cells, fragments of DNA from the baby that are floating in the maternal blood stream, and can identify the genetic problems in the trisomy category, including Down syndrome, with a 99 percent accuracy rate.

“The results are amazing,” Loudenber said.

Quad screen and triple screen testing, the current standard of screening tests for these particular genetic abnormalities, have a 70 to 90 percent detection rate. They also have about a 30 percent false-positive rate.

Screening for trisomy class abnormalities is recommended to mothers in high-risk categories, such as women over the age of 35 and those with familial histories of trisomy abnormalities. It is an option in every pregnancy.

Loudenber said the test offers expectant mothers the opportunity to be proactive about their unborn child’s health.

“We never force anybody to (take the test). It’s an option if they would like to do it,” she said.

Better prepared While the test does provide expectant mothers and their families with the ability to learn more about the health of their new baby, it is not without controversy. Some fear the test may be used by mothers to decide whether or not to terminate a pregnancy if their child is expected to be born with a trisomy condition.

“One popular thought if the only reason to do some of these (prenatal tests) is to terminate a pregnancy if an abnormality is detected,” Loudenber said.

In most cases, that is not why women elect to undergo pregnancy screenings, according to Loudenber.

“The whole purpose of prenatal surveillance is watching for early signs of problems so you can take care of a baby with problems,” she said.

Shelley Jones, an expectant mother in Kouts, said she has often been asked why she would take a test such as Harmony if she has no plans to terminate the pregnancy if an abnormality is detected.

“For us it’s not just peace of mind, it’s being prepared,” Jones said.

At 36, Jones falls into the high-risk age category and was prepared to take one of the more traditional tests when she learned about Harmony. Having the knowledge of what to expect if her baby were to be born with an abnormality would better help her to prepare for what is to come.

She said new mothers are overwhelmed by all that is going on when they give birth to a healthy newborn. If a child is born with abnormalities, there would be no time to research the situation and the best avenues of care for her baby. Jones’ test came back showing no abnormalities.

“I’m not the type of person who chooses to interact with health-care professionals and just take their advice. I do my own research and ask a lot of questions,” Jones said.

Even after researching most aspects of pregnancy, Jones said there were still surprises she did not read about in any books or told about by health-care providers. She said knowing what to expect, choosing the right hospital for the delivery and perhaps going through the inevitable grieving process of learning your child will be challenged before the delivery room, would help her make sure her newborn had the best care and opportunities possible.

She said it would also give her the chance to make the most out of her newborn’s development. With many conditions, the earlier the diagnosis, the sooner steps can be taken to increase the child’s development.

“You can hit the ground running,” Jones said.

Knowing whether a baby is healthy of not before it leaves the womb better prepares health-care workers to take care of the infant upon delivery. For example, one in four children born with Down syndrome or one of the trisomy abnormalities have a major cardiac abnormality at birth that often requires immediate surgical intervention. Knowing a child is at risk better prepares the expectant mother to deliver in a facility equipped to handle such a problem.

“Babies are better served when there are no surprises,” said Loudenber.

Loudenber said the decision to test is a personal one families must make on their own after weighing all the options.

She said one day the accuracy of the Harmony test may lead it to become a diagnostic tool. Loudenber said the test shows promise in other areas that can help to advance prenatal care and diagnostics such as blood typing a baby.

“The possibilities are endless,” she said.