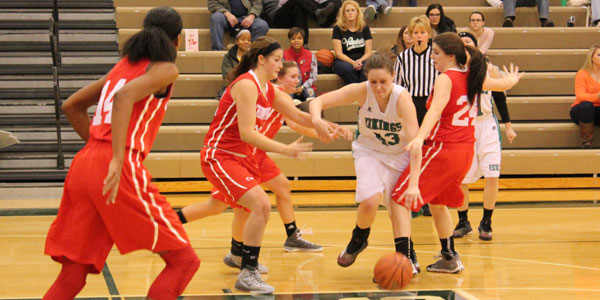 Portage 54, Chesterton 53 (Friday) Click here for photos of this game!
Kaitlyn Shafer hit a game-winning three pointer in the final seconds to put the Indians up for good, earning their first DAC win of the season over Chesterton. Kaitlin Doud led the team with 17 points, Shafer had 11 and Katie Steers had 10. The team would like to thank an awesome student section and the PHS band for creating a tremendous home court advantage on Autism Awareness Night. The team would also like to thank PHS and the Portage community for all their help in this great cause.

Marquette Catholic 65, River Forest 36 (Friday)
The Marquette Catholic boys basketball team was back in action on Friday evening when they traveled to River Forest. Following a 53-42 junior varsity victory, varsity took the floor. The Blazers had no problem dispensing of the Ingots as they won 65-36. The Blazers were led by Ryan Fazekas who had 32. Kyren Miller also chipped in with 10. The boys basketball team is back in action on Friday, December 19, 2014 for their home opener against Hanover Central. JV tips off at 5:00pm. The presentation of the state championship rings will be made in between the JV and Varsity contests and the Varsity contest will follow.