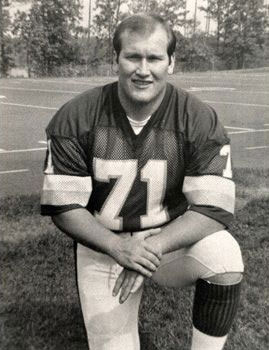 Former football standout and Valparaiso Hall of Fame member Garry Puetz ('72) has once again graced the National Football Foundation's (NFF) ballot for induction into the College Football Hall of Fame.

Puetz played 10 seasons in the NFL with five teams following his brilliant career with the Brown and Gold. While with the Crusaders, Puetz was a two-time American Football Coaches' Association (AFCA) All-American, and earned Indiana Collegiate Conference (ICC) honors on three separate occasions.

Puetz is one of two Valpo alums - Fuzzy Thurston the other - who owns the distinction of earning a Super Bowl ring. The Chicago native did so in 1982 with the Washington Redskins. A 12th-round draft choice of the 1973 New York Jets, Puetz played five seasons with the Jets before being acquired by Tampa Bay. He also played briefly with the Philadelphia Eagles in 1979 before signing with New England.

Voting for the College Football Hall of Fame, which is made up of members of the National Football Foundation, closes on June 20th. The NFF will announce the winners Friday, January 8th, 2016 at the Camelback Inn in Scottsdale, Arizona.