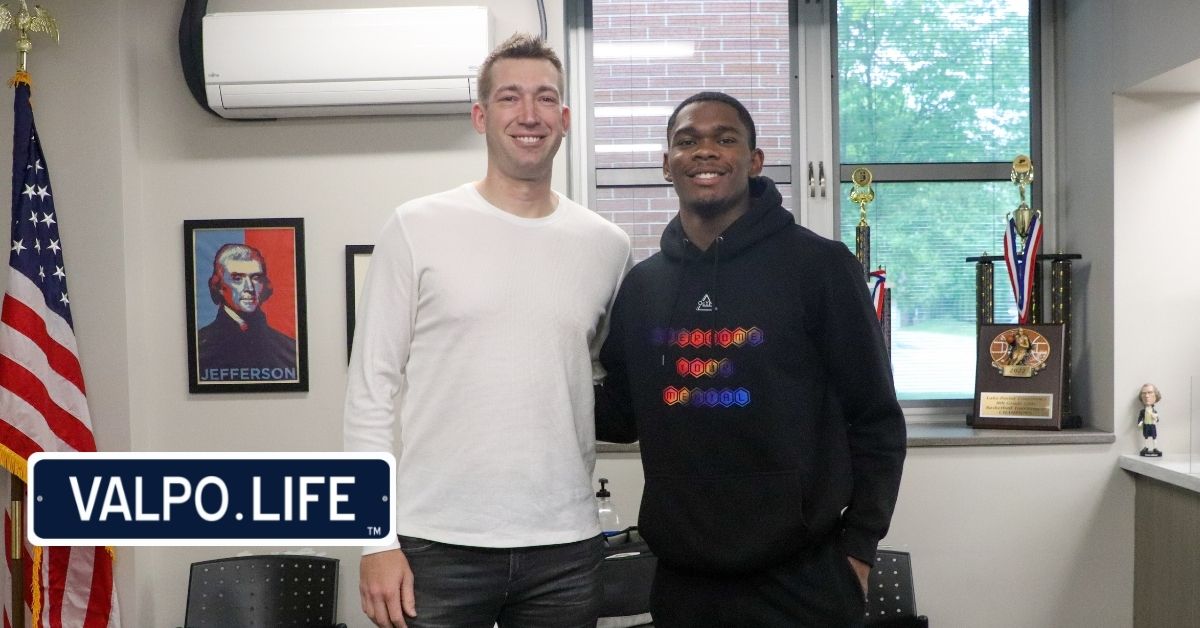 More than 600 students at Thomas Jefferson Middle School (TJMS) were on the edge of their seats with excitement as Valpo alumni and Purdue University basketball icons Brandon Newman and Robbie Hummel spoke to the kids about overcoming hardships on May 25.

“Former students had contacts with some teachers who knew Brandon, and then his former coach, Mr. [Bryan] Benke knew how to get a hold of him. And then Rob's mom worked here and actually just retired this past year, so I reached out to her and we were able to coordinate a date and get both of them here,” said TJMS Principal Mark Maudlin.

Both Newman, a current Purdue basketball player, and Hummel, a former Purdue basketball player and current ESPN analyst, have had quite the journey full of hard work and perseverance to reach the success they have today.  The two were inspired to share their words of encouragement with the students in hopes it would motivate them to work hard towards their own goals. Newman and Hummel were also once in the shoes of the hundreds of middle schoolers listening to them now, so they are well aware just how much their words can mean to the ears of kids.

One of the main takeaways both shared with their speeches was that with any goal, it’s always vital to make sure you’re always putting in 100% effort and working as hard as possible to make any dream a reality.

“When I was in eighth grade, I had a goal that I wanted to play on Valpo’s high school varsity basketball team, I wanted to be a NBA Allstar, and I want to play in the NCAA Tournament and everything I did in terms of basketball was working towards those goals,” Hummel said.

Hummel, now in his early 30s, has been through many obstacles in over the years of his college basketball career while working to reach the goals he set as a kid, including breaking a bone in his back his sophomore year and then tearing his ACL on the first day of practice back after months of surgery and rehab. While Hummel admits his various injuries definitely made it hard to keep his head in the game, his love and dedication for the sport was what ultimately helped him get through the tough times in the end. His motivation was his driving factor, something he wanted the kids to know could make or break any experience.

“It took a little bit of time to kind of refocus and say, ‘You know, I need to get back on this and I love playing basketball.’ I wanted to get back, but it was a challenge, and there are days, whether you're injured or whether it's going through a tough time, you guys be going through this every day and you're like ‘man, I don't want to do this,’ but finding some type of motivation and pushing through some of those tough days is only going to help you going forward.”

Newman also credits the struggles he went through in shaping the person he is today, and credits his friends and teammates for their help and support throughout the way as well.

“I wouldn't be the person I am sitting in front of you guys today if I didn’t go through what I did,” he said. “Last year was an experience I'm grateful for and it’s something I’m going to use for motivation as time goes on, and I’m also surrounded by the best teammates and they’re one of my central sources for support.”

Over the years, because of their goal-oriented and driven mindsets, both have seen major successes in their sports careers. Newman, who plans to graduate from Purdue next fall, was just chosen to represent the United States on the USA East Coast Basketball Team taking on international competition. Hummel has also played for the Minnesota Timberwolves professional basketball team and is now working with one of the most well known sports networks out there.

Maudlin and the TJMS staff was also beyond excited that Newman and Hummel were able to share their stories with the students as well.

“It's always great to have former students come back and share messages about their successes and the adversities that they've overcome to get where they are in life now,” he said. “I just want to thank Brandon and Rob for coming and sharing the message with kids who are in the same shoes they were in years ago, and hopefully, that message resonates with kids and they're able to be better people today afterwards than they were before.“