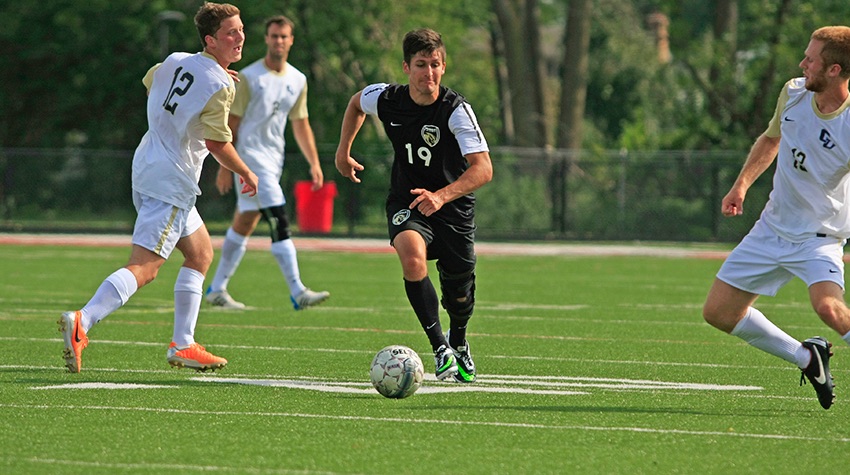 After trailing early in the first match of the 2015 campaign, the Peregrines answered back with five unanswered goals to pick up their first win of the season over Rochester College, 5-1, in Rochester, Mich. Sunday afternoon. Andres Ayala (San Antonio, Texas/ Ronald Reagan) led the way with his second career hat trick to lead the Purdue Calumet scoring effort.

"It's great to start off the season with a win," head coach Ryan Hayes said. "The team applied themselves well and got the result they deserved."

Rochester midfielder Kyle Doyan put the Warriors on the board first, scoring in the 19th minute to put Rochester up 1-0.

Purdue Calumet would answer in the 29th minute thanks to freshman Ryan Serna (Highland, Ind./Highland), who notched his first career goal in a Peregrine uniform to tie the game, 1-1, allowing the teams to head in to the locker room with the game knotted up at one goal each.

The Peregrines wasted little time breaking open the scoreboard in the beginning of the second half, as the Black and Gold scored two goals in the 57th minute.

Cristian Garcia (Whiting, Ind./Clark) was the first to score in the second half, thanks to an assist from Zac Doepke (Troy, Mich./Troy), which put Purdue Calumet up 2-1.

Less than 45 seconds after the Peregrines took the lead, Ayala notched his first of three goals on the day from a pass by Serna, extending the Black and Gold’s lead, 3-1.

Just four minutes later, Ayala had a little help from his keeper Miguel David (Spring Valley, Calif./Bonita Vista), who assisted on his second goal of the day, widening the gap to 4-1.

Ayala notched his third and final goal in the 66th minute on another pass from Serna, jumping the Peregrines out to 5-1 and giving the Black and Gold their first win of the season. Ayala recorded his second career hat trick, his last came against Grace Bible during the 2013 season.