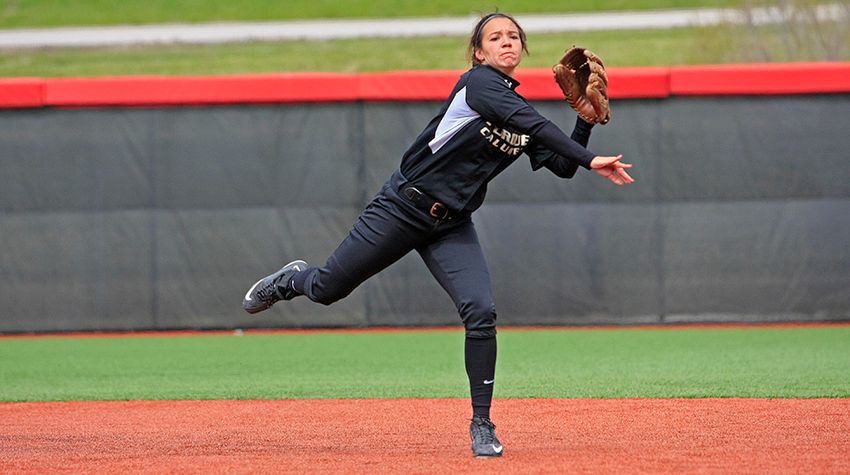 Junior Hannah Lopez (Granada Hills, Calif./Bishop Alemany) led the Peregrines (4-8) at the plate for the day, finishing 3-for-4 with two RBI and two doubles.

Purdue Calumet returns to action Thursday with a 8 a.m. matchup with Cornerstone (Neb.) and noon contest against Bellevue (Neb.) in Leesburg, Fla.

GAME 2: #16 Southeastern 4, Purdue Calumet 3
Purdue Calumet used a big three-run inning to take an early lead over the Fire, but Southeastern was able to rally in final three innings for a comeback win. Junior Hannah Lopez went 2-for-2 with a double and two RBI and a run scored; Olivia Sardella (Dyer, Ind./Lake Central) had a single and junior Samantha Oppenhuis (Munster, Ind./Illiana Christian) added an RBI-double to lead the Peregrines' offense.

The Peregrines jumped out to a 3-0 lead in the fourth, when Sardella used a one-out single to kickstart a Purdue Calumet rally. Lopez would provide the big hit, connecting on a two-RBI single. Oppenhuis added the second score, blasting a double to deep right-center to plate Lopez.

But the Fire answered in the fifth, scoring two runs on three hits to cut the lead to 3-2. SEU would go on to score another run in the sixth before the seventh-inning's walk-off win via Anna Martin's RBI-single.

Game 1: #16 Southeastern 4, Purdue Calumet 1
The Peregrines’ stood tied with the No. 16 team in the country for four and a half innings, but host Southeastern was able to pull away in the final frames to pick up the 4-1 win in Game 1.

Junior Allyson Leach (Demotte, Ind./North Newton) finished the game 1-for-2 at the plate with a walk, junior Hannah Lopez was 1-for-2, and senior Jess Loy (Skokie, Ill./Niles North) went 1-for-2 and scored the Peregrines’ lone run in the top of the fifth inning.

Southeastern struck first, plating a run in the second inning when Annie Weaver singled to score Brandee Pietrzak, who doubled. Purdue Calumet would answer in the top of the fifth, when Loy walked, advanced to second on a Taylor Kotzo (Munster, Ind./Munster) sacrifice bunt and later scored on a Fire error.

But that lead was short-lived, as Southeastern responded with two runs on three hits, the most damaging a two-out single by Anna Martin to score both. The Fire would add another run in the sixth on a double-steal, before holding off the Peregrine’s offense in the top of the seventh to end the game.

The Peregrines are currently underway in Game 2 of the doubleheader against the Fire.

After a scoreless first frame, Cornerstone would record the first run of the game in the second inning after a home run from Elizabeth Albaugh gave the Golden Eagles a 1-0 advantage.

The Peregrines would even the score in the bottom half of the fourth, thanks to an RBI-single from Allyson Leach (Demotte, Ind.) which plated Alex Morales (Bartlett, Ill./Bartlett).

In the top of the fifth inning, Alexsandra Szajna belted a three-run homer to take back the lead for Cornerstone, 4-1.

After a single from Tessa Steffens (Litchfield, Ill./Litchfield) followed by a double by Olivia Sardella (Dyer, Ind./Lake Central) started off the bottom of the sixth, Holly Pagan (Bartlett, Ill./Bartlett) would ground out to first to score Steffens and cut their deficit to two, 4-2, entering the seventh inning.

The Golden Eagles would stop a comeback effort from the Black and Gold in the bottom of the final frame and come away with the 4-2 win.

The Peregrines face off with Bellevue University at 12:00 p.m (CT) for their final game at the NTC Invite.

Game 1: Roosevelt 11, Peregrines 2
The Peregrines took an early lead in the first inning, thanks to a sacrifice fly from Cody Dykema (Crown Point, Ind./Lake Central) plated Tyler Crussen (Valparaiso, Ind./Wheeler) to give the Black and Gold a 1-0 advantage.

Roosevelt (5-4) would break open the scoreboard with a six-run third inning, starting with an RBI-single by Logan Fleener which evened the score at 1-1.

A Tyler Ward 2-RBI single followed up by another 2-RBI triple from Parker Coleman gave the Lakers a 6-1 lead heading in to the fourth inning.

Roosevelt would score one more in the fourth, followed by a 4-run sixth inning led by Colton Trager who connected on a 3-run home run to extend their lead to 11-1.

Freshman Avondre Harris (Mishawaka, Ind./Mishawaka) would notch an RBI-single to plate Luke Schmidt (Crystal Lake, Ill./Crystal Lake South) in the top of the seventh, but that't all of the runs the Peregrines would add, dropping the 11-2 decision to the Lakers.

Sophomore Willie Bennett (Santee, Calif./West Hills) suffered his first loss for the Peregrines, striking out three in six innings of work while John Swisher earned his first win of the season for the Lakers.

Game 2: Trinity Christian 12, Peregrines 4
The Trolls (12-7) started the game off with a three-run first frame, led by a two-run homer from Luke Weston.

Purdue Calumet (4-4) would break in to the Trolls early lead, notching a pair of runs in the bottom of the first inning on a 2-RBI double from Andrew Atchison (Crown Point, Ind./Crown Point) which scored Eric Sickles (Benicia, Calif./Benicia) and Dykema.

The bats continued to stay alive for the Trolls however, scoring five more runs in the next three innings to take an 8-3 lead heading in to the fifth inning.

Dykema would connect on his second home run of the season in the bottom of the fifth, but the Trolls would hold the Peregrines scoreless in the final two innings to come away with the 12-4 win.

Phil Madvek (Hobart, Ind./Hobart)​ suffered his first loss of the season, striking out four batters in four innings of work.

Purdue Calumet will finish off their trip in the Sunshine State on Friday, Mar.11, when they face off with Anna Maria (Mass.) at 8:00 a.m. (CT).