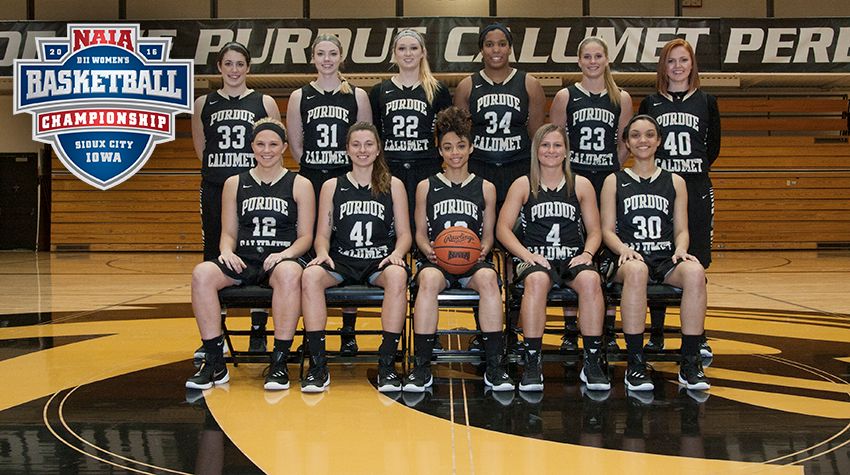 BREAKING DOWN THE BRACKET
Purdue Calumet, the No. 21 team in Wednesday’s Final NAIA Coaches’ Top 25 Poll, earned the eighth at-large spot (out of 10) in the tournament, with First Round play set to begin March 9. The Peregrines stand in the Cramer Bracket, with No. 1 seed Olivet Nazarene.

LOOKING AHEAD
Should Purdue Calumet advance, the Peregrines will face the winner of 2-seed College of Ozarks (Mo.) and 7-seed Friends on Friday, March 11, at 8:45 p.m. The National Championship is set for Tuesday, March 15, at 7:04 p.m. and will be streamed live on ESPN3.

LIVE LOOK
All 31 games of the NAIA Division II Women’s Basketball National Championship will be streamed on the NAIANetwork.com, presented by Stretch Internet.

NATIONAL TOURNAMENT HISTORY
The Peregrines’ berth marks the third national berth for the women’s team in the last four seasons and the first trip to Sioux City (Iowa) since the Peregrines earned an automatic bid in 2013-14, after capturing both the CCAC regular-season and tournament titles. That season, Purdue Calumet won its first-ever tournament game en route to a spot in the Sweet Sixteen. The Peregrines defeated Oregon Tech, 83-75, before losing to national runner-up Davenport (34-2).

Purdue Calumet made its first NAIA nationals appearance under ninth-year Head Coach Tom Megyesi in 2012-13, when the Peregrines earned an at-large bid after finishing the regular season 21-9. Purdue Calumet lost in the first round, falling to N. 19 Grand View (Iowa), 58-44.