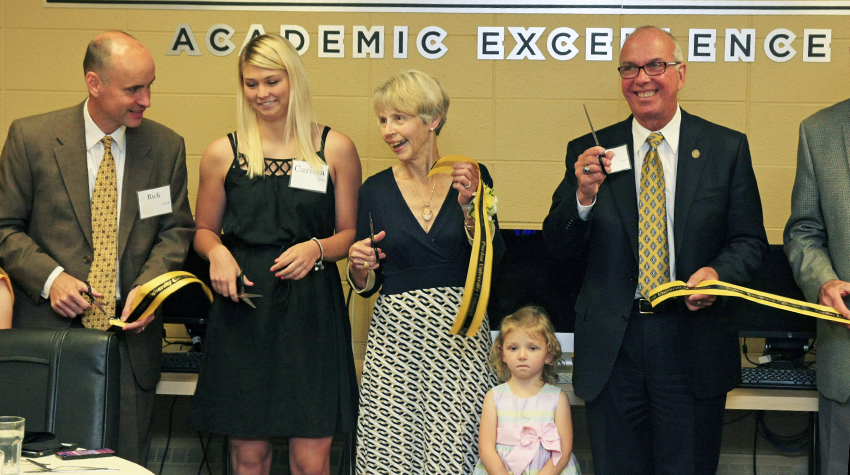 With nearly 40 of their family and friends in attendance, the official ribbon cutting of the Paul K. and Barbara Graegin Academic Excellence Center was held Tuesday inside Purdue University Calumet’s Fitness and Recreation Center.

“Today is a celebration of the Graegin Academic Excellence Center, which provides space for more than 30 student-athletes to study before and after classes, games, practices, and training sessions,” Purdue Calumet Athletic Director Rick Costello said during the event, which featured a luncheon for Barbara Graegin and her late husband’s friends and family members.

“This center was generously funded by Barbara Graegin in honor of her late husband Paul – a center that is always filled with student-athletes and has greatly impacted Peregrine athletics and is quite simply, a ‘game changer.’

“The Academic Excellence Center and the Graegin Endowment will affect many, many students for generations to come.”

The event featured a ribbon cutting in front of the newly installed sign located inside the center, which reads “Paul K. and Barbara Graegin Academic Excellence Center.” Barbara Graegin was also presented with a special commemorative plaque installed on the wall, which details the Graegin’s gift.

Paul Graegin, who passed away in October 2011, was a Hammond native, Purdue University graduate and avid supporter of Purdue Athletics. He served in the U.S. Army for two years before joining his father Cecil’s company, Correct Piping, Inc., a company which he later took over and renamed Correct Construction, Inc.