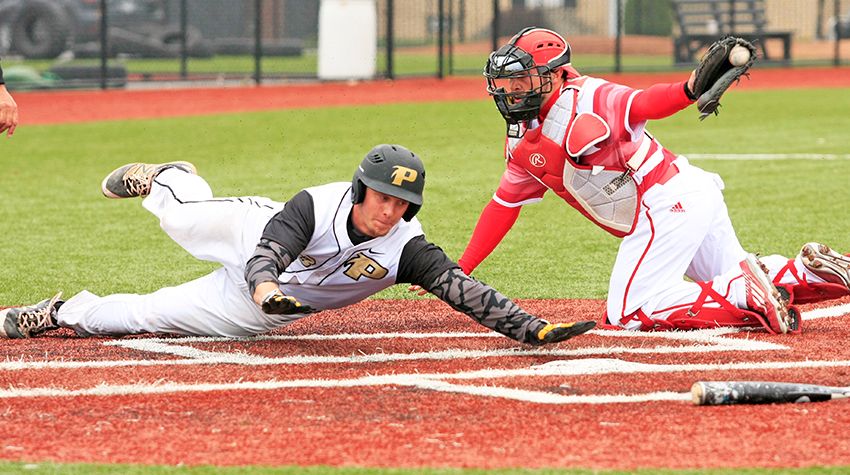 Purdue Calumet returns to action with a single game against the Titans Monday night at 5 p.m. (CT) in South Bend, Ind., held at School Field.

The Peregrines put themselves in prime position to enter the CCAC Postseason tournament, as Purdue Calumet currently holds the eighth and final seed to this week's tournament, set to begin Friday, May 6, at Judson University in Elgin, Ill.

Sitting in ninth place is Roosevelt University (12-15), which has two games to go tomorrow night against Trinity International. To clinch the outright berth, Purdue Calumet needs either a win against IUSB Monday or one loss by Roosevelt.

Game 1: Peregrines 12, IU South Bend 1
The Peregrines took a 2-0 lead in the top of the first inning, after an RBI-single from Eric Sickles (Benicia, Calif./Benicia)followed by a fielder’s choice from Andrew Atchison (Crown Point, Ind./Crown Point) put the Peregrines up 2-0.

Purdue Calumet would tack on four more runs in the third inning, to give the Black and Gold a 6-0 advantage.

The Peregrines would capitalize off a Titan miscue followed by a bases loaded walk from Tyler Crussen (Valparaiso, Ind./Wheeler) to extend the Peregrines lead.

Purdue Calumet would take a 9-0 advantage heading in to the sixth frame, thanks to back-to-back RBI at bats from Skalka and Dykema.

The Titans would score one run in the bottom of the sixth, but the Peregrines would add two more runs in the seventh and come away with the 12-1 victory.

Jimmy Skiff (Dyer, Ind./Andrean) would earn his third win of the season, after throwing a complete game, allowing just one earned run and five hits while striking out four.

Purdue Calumet would answer right back in the bottom of the first, taking the lead away from the Titans thanks to a four-run frame.

Dykema, Sickles and Atchison would record three-straight RBI- singles to even the game at 3-3, followed by an RBI-groundout from Avondre Harris (Mishawaka, Ind./Mishawaka), which plated Cody Moskovsky (St. John, Ind./Bishop Noll) to put the Peregrines ahead 4-3.

The Peregrines would score one run in each of the next three innings to take a 7-3 lead, followed by a two-run fifth to take a commanding 9-3 advantage.

The Titans would score two runs in the top of the eight, but that was all they would get, as the Black and Gold defeated the Titans, 9-5.

Freshman Josh Arnold (Lowell, Ind./Lowell) earned his fifth win of the season, after throwing 7.2 innings while giving up five runs, three earned, and striking out four.