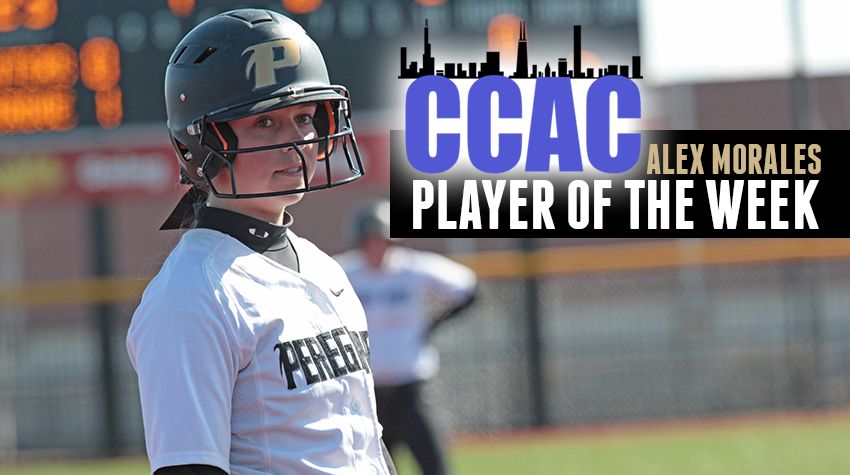 Morales (Bartlett, Ill./Bartlett) carried the Peregrines' offensive efforts in a twin bill sweep against Viterbo March 20. She recorded a .750 (6-for-8) batting average, .750 on base percentage and 1.250 slugging percentage with four doubles, two RBI and two runs scored in 8-5 and 6-1 wins over the V-Hawks.

The 5-foot-8 outfielder leads the Peregrines offensively this season with a .352 batting average, 11 RBI and a .481 slugging percentage.

The award marked the first CCAC Player of the Week honor for Morales in her second season with the Peregrines, and just the second-ever weekly award for the program in its third season.

The Black and Gold return to action on Tuesday, March 22, when they travel to Clinton, Iowa, to face off with Ashford University in a doubleheader starting at 5 p.m. (CT).

Purdue Calumet sophomore Joshua Jackowski (St. John, Ind./St. John) was second overall, shooting a 78 with 11 pars of his own to go along with one birdie. Freshmen Ryan Wells (St. John, Ind./Lake Central) and Leo Govert (Crown Point, Ind./Crown Point) finished tied for 10th with 84s to round out the Peregrines’ scoring, while rookie Michael Goodman (Dyer, Ind./Mount Carmel) shot a 89 in individual play to complete Purdue Calumet’s competitors.

Olivet Nazarene’s Matt Winkelman led the Tigers, shooting a 79 to finish third in the individual standings, while teammate Robert Wagner carded an 80 — including the day’s lone eagle.

The Peregrines return to action Friday, April 1, when they head to the two-day Indiana East Invitational held in Liberty, Ind.

Senior Eric Sickles (Benicia, Calif./Benicia) put the Peregrines (7-7, 2-3 CCAC) on the board first, with an RBI-single which plated Tyler Crussen (Valparaiso, Ind./Wheeler) which gave Purdue Calumet a 1-0 lead in the top of the first frame.

St. Ambrose (9-13, 3-2) would remain scoreless until the bottom of the fourth inning, when they evened the score, 1-1, on a defensive error from the Peregrines.

The Fighting Bees would take their first lead of the game thanks to a three-run fifth run which gave SAU the 4-1 advantage.

Purdue Calumet would cut in to their deficit in the top half of the sixth inning, after a single from Giulio Fantasia (Alpena, Mich./Alpena) plated Sickles, with the Peregrines still trailing 4-2.

Sickles would keep the Peregrines alive in the top of the seventh, after ripping a 2-RBI double, scoring Cody Dykema (Crown Point, Ind./Lake Central) and Drake Larriuz (Lake Villa, Ill./Lake Community) evening the score at 4-4.

A sac fly from Luke Schmidt (Crystal Lake, Ill./Crystal Lake South) would plate Sickles later in the inning to give the Peregrines a 5-4 lead heading in to the bottom of the seventh.

The Fighting Bees would tie the game at 5 runs apiece, but in extra innings Sickles would drive in what would be the game-winning run in the top of the eighth on a single to left field.

Junior Matt Sandoval (Highland, Ind./Bishop Noll) started the game but received the no decision after throwing 6.1 innings, while giving up three earned runs and striking out three.

Freshman pitcher Brett Shoults (Oxford, Ind./Benton Central) would enter the game in relief for the Peregrines and earn his second win of the season, after pitching 1.2 innings and allowing just 1 hit.

The Peregrines are currently underway with SAU in Game 2 of the double header at Modern Woodmen Park.

Cody Dykema drove in Tyler Crussen for the first run of the game in the top of the first inning, but SAU would immediately answer in the bottom half of the inning to even the score, 1-1.

Crussen would give the Black and Gold a 2-1 advantage on a fielder’s choice in the fourth inning, but the Fighting Bees would use a 5-run inning to take a 6-2 lead.

Each team would add one more run each for the rest of the game, with St. Ambrose taking the second game 7-3.

Sophomore Alec Skalka (Munster, Ind./Munster) led the Peregrines offensively, after batting 2-for-2 with a walk and a run scored.

Purdue Calumet returns to action on Saturday, Mar. 26, when they travel to take on Robert Morris in a CCAC doubleheader starting at 1:00 p.m. (CT)

Sardella (Dyer, Ind./Lake Central) finished the day with a near-perfect 6-for-7 performance at the plate, including her first home of the season, three doubles, and six RBI. Classmate Kotzo (Munster, Ind./Munster) added a 4-for-6 performance with her first home run of the year, a double, and five RBI.

After starter Carly Murphy (Munster, Ind./Munster) retired three-straight Ashford batters in the bottom of the inning, the Peregrine offense erupted for seven runs to open the third. Holly Pagan (Bartlett, Ill./Bartlett) started the barrage with a RBI single, followed by RBI hits from Kotzo and Hannah Lopez (Granada Hills, Calif./Bishop Alemany), before Sardella crushed a 3-RBI double to clear the bases to make it 6-0, Peregrines. Allyson Leach (Demotte, Ind./North Newton) kept the rally alive with a single to score Sardella to give Purdue Calumet a 9-0 lead.

Ashford answered with a run in the bottom of the third, but Kotzo opened the fourth with her first long ball of the season and Sardella would later double to score Steffens, who singled, to make the score 11-1. Kotzo’s next at-bat was a two-RBI double in the fifth to push the lead to 13-1 before the Saints scored their final run in the bottom of the inning.

Sardella finished Game 1 3-for-4 with four RBI and Kotzo went 3-for-3 with four RBI. Steffens finished 2-for-4 with two RBI and Pagan was 1-for-3 with a RBI and two runs scored. Murphy (4-5) picked up the win in the circle, striking out five while holding the Saints to four hits. Purdue Calumet batters recorded 15 hits in the game, a season high.

Game 1: Ashford 7, Purdue Calumet 4
Olivia Sardella belted her first homer of the year in the first inning to give the Peregrines’ an early lead, but Ashford responded with a big five-run fifth-inning to take Game 1.

Sardella added a RBI double in the third to score Tessa Steffens (walk) to give Purdue Calumet a 2-0 lead, but Ashford would score five runs on five hits in the fifth, led by a Ashlee Amador’s three-run home run. A Kotzo single and Brianna Hall RBI gave the Peregrines two runs in the sixth but Ashford would answer again with two more runs in the sixth on a Siera Spahiu long ball.

Sardella was 3-for-3 with two RBI to lead the Peregrines’ seven-hit effort in Game 1. Holly Pagan took the loss in the circle, scattering nine hits, striking out four while giving up just three earned runs.