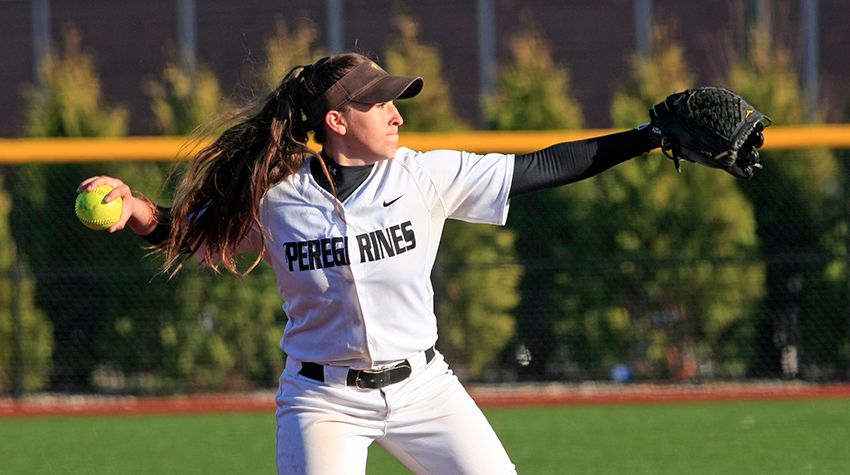 Game 1: Aquinas 2, Peregrines 1
Both teams were shut down in the first four innings of play, after strong starting pitching by both squads made it a 0-0 game heading in to the fifth frame.

The Peregrines would score first in the bottom of the fifth, after an RBI-single from Alex Morales (Bartlett, Ill./Bartlett) plated Hannah Lopez (Granada Hills, Calif./Bishop Alemany) to put the Black and Gold up 1-0.

Aquinas would connect on what would be the game-winning run in the top of the seventh, thanks to a solo homer from Ellie Adams which helped lift the Saints past the Peregrines 2-1.

Game 2: Aquinas 11, Peregrines 3
Aquinas jumped on the board early in Game 2, connecting on four runs on five hits to take an early 4-0 advantage.

The Saints would add another run in the top of the third inning on an RBI-single from Andrea Deneweth to extend their lead, 5-0.

Aquinas would continue to hit the ball and extend their lead in the fourth inning to take a 9-0 lead.

Sophomore Holly Pagan (Bartlett, Ill./Bartlett) would cut in to the Saints lead in the bottom of the fourth frame, connecting on her second home run of the season to make it 9-2.

The Saints would stop a comeback effort from the Peregrines in the bottom of the fifth and come away with the 11-3 win.

The Peregrines return to action on Tuesday, Mar. 29 for a doubleheader with Chicagoland Collegiate Athletic Conference opponent Judson University starting at 3:00 p.m. at Dowling Park.​

The Peregrines return to action Tuesday, March 29, when they host Trinity International in a league pair at Dowling Park. Game 1 begins at 2 p.m. CT.

Peregrines' starter Willie Bennett (Santee, Calif./West Hills) kept Eagles' batters off-balance after that, as the sophomore dealt three strikeouts and allowed just two hits -- both singles -- in a six-inning stint. Junior Matt Sandoval (Highland, Ind./Bishop Noll) closed the door, picking up his first save of the season with hitless seventh.

Robert Morris struck first in the game, scoring a run on Chase Armstrong's RBI single in the first inning.

Cody Dykema (Schererville, Ind./Lake Central) finished 2-for-5 with a double and Eric Sickles, John Cristo (Munster, Ind./Munster), and Cole Garcia each added two hits each for the Peregrines to lead the way.

Purdue Calumet opened Game 2 with an early lead, as Schmidt connected on an RBI-single to score Alec Skalka, who singled. The 1-0 lead didn't last, as Robert Morris answered with a two-hit, one-run fourth inning, scoring on wild pitch. RMU added another run in the fifth to take a 2-1 lead before the Peregrines responded with a big sixth frame.

Dykema opened that inning with a single through the left side, followed by a Sickles single. Luke Schmidt (fielder's choice) and Sickles would later score on a RMU error to give the Peregrines' a 3-2 lead. But the Eagles would answer one last time, scoring two runs on three hits in the sixth to take a 4-3 lead.

Purdue Calumet had two runners on base with one out in the ninth, but RMU closer Kyle Crawford got out of the jam with two groundouts to end the game.