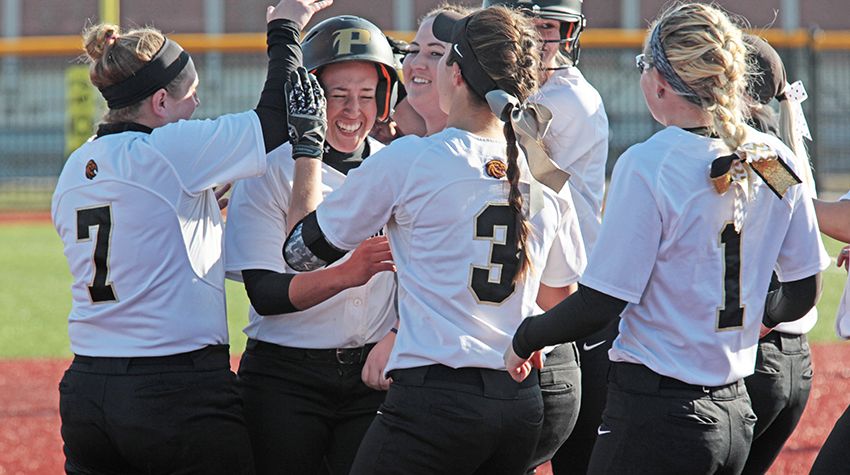 Lopez led all Peregrine hitters on the day, finishing 4-for-7 with a double, a triple, and one RBI.

Purdue Calumet returns to action Thursday, when the Peregrines travel to Olivet Nazarene for a CCAC doubleheader in Bourbonnais, Ill.

GAME 1: Purdue Calumet 4, Judson 3 (8 innings)
Hannah Lopez (Granada Hills, Calif./Bishop Alemany) came up with the clutch hit in the bottom of the eighth inning, belting a double to right centerfield to give the Peregrines a come-from-behind, 4-3 victory. Freshman Tessa Steffens (Litchfield, Ill./Litchfield) walked with two outs and senior Jess Loy (Skokie, Ill./Skokie) kept the inning alive with a single to left field to put Steffens in scoring position, setting up Lopez’s walk-off knock.

While Lopez came up with the game-winner, it was junior Brianna Hall (University Park, Ill./Marian Catholic) who gave Lopez the chance to be the hero, as Hall connected with an RBI single up the middle in the bottom of the seventh with the Peregrines trailing, 3-2. Hall’s hit plated Lopez, who tripled, to tie the game at 3-all and send it into extra innings.

Judson got on the scoreboard first with a Sarah Friedlund solo home run to center in the third inning to take a quick 1-0 lead. The Eagles would add two more scores in the sixth on three hits and a pair of Peregrine errors to push that lead to 3-0.

Junior Carly Murphy (Munster, Ind./Munster) picked up her fifth win of the year in eight innings in the circle, striking out three and giving up just one earned run in the eight-hit Judson effort.

Lopez finished 2-for-4 with two extra base hits and an RBI and Hall added a 2-for-2, RBI performance to lead the Peregrine hitters.

GAME 2: Judson 6, Purdue Calumet 2
The Peregrines struck first with a run in the third inning, but Judson used three-run frames in the fourth and sixth innings to pull away in Tuesday’s nightcap.

In the third, Alex Morales (Bartlett, Ill./Bartlett) connected on an RBI-single through the left side to score Brianna Hall (University Park, Ill./Marian Catholic), who reached on an error and advanced to second on a passed ball. Judson, however, recorded five hits and capitalized off a Peregrine error to take a 3-1 lead in the fourth, where the Eagles’ Maddie Smith led off the frame with a solo home run to left field.

Purdue Calumet would respond with a run in the fifth, when Allyson Leach (Bartlett, Ill./Bartlett) scored on a error to cut Judson’s lead to one, at 3-2.

But the Eagles would have one more big inning in the sixth, scoring three more runs on four hits — the biggest a Lauren King, two-RBI triple to left field — to take control of the game. Judson starter Elizabeth Walker held the Peregrines to just five hits and two earned runs, while striking out four.

At No. 1 doubles, Pimentel and Jayson Savich (Lowell, Ind./Lowell) were able to win a game before falling, 8-1.

Sophomore Abby Kvachkoff (Crown Point, Ind./Crown Point) won a game in both of her sets but fell, 6-1, 6-1 to ONU's Seraphine Buchmann in No. 3 singles.

Kvachoff and sophomore Kasey Kulesa (Munster, Ind./Munster) picked up two wins in No. 2 doubles but fell 8-2 to ONU's Monakhova and Huckabee.

With the loss, the Peregrines fall to 3-1 on the season and 0-1 in the CCAC. The Peregrines return to action Wednesday afternoon as they take on North Central College starting at 2 p.m. CT at Dowling Park's Community Hospital Tennis Complex.

Peregrine Baseball Splits Doubleheader With TIU Tuesday Afternoon
After dropping the first game of Tuesday’s double header with Trinity International 2-1, the Peregrines bats came alive to defeat the Trojans 9-5 in the nightcap at Dowling Park.

Game 1: Trinity International 2, Peregrines 1
After a scoreless first frame by both squads, the Trojans (14-13, 4-6 CCAC) scored first in the top of the second innings on a Michael Balistreri single which drove in Adam Vignola.

TIU would add one more run in the inning, to take a 2-0 advantage heading in to the bottom half of the second frame.

It took until the seventh inning for the Peregrines to get on the board, but an RBI-double by Luke Schmidt (Crystal Lake, Ill./Crystal Lake South) plated Cody Dykema (Crown Point, Ind./Lake Central) to cut their deficit to one, 2-1.

TIU would stop the Peregrines from mounting a comeback, coming away with the 2-1 victory.

Junior Matt Sandoval (Highland, Ind./Bishop Noll) threw a complete game for the Black and Gold, giving up five hits and striking out nine.

Game 2: Peregrines 9, Trinity International 5
After a four-run first inning put the Trojans up early over the Black and Gold, the Peregrines creeped back to cut their deficit in half, with TIU leading 4-2 heading in to the fifth frame.

A six-run fifth inning by the Black and Gold gave the Peregrines an 8-2 advantage led by strong hitting effort throughout the order.

Much like Game 1, Schmidt would double early in the fifth inning to plate Dykema to even the score at 4-4.

John Cristo (Munster, Ind./Munster) and Brock Crews (Manteno, Ill./Manteno) would continue the hit parade with back-to-back RBI-singles to take their first lead of the game, 6-4.

Tyler Crussen (Valparaiso, Ind./Wheeler) would expand the lead to 8-4 later in the inning, after a single plated Alec Skalka(Munster, Ind./Munster).

Both teams would each score one more run the rest of the game, with the Peregrines coming away with the 9-5 win.

Crews led the offensive attack with the Peregrines, leading both teams with a 4-of-5 day at the plate with 1 RBI.

Jimmy Skiff (Dyer, Ind./Andrean) earned his first win of the season, striking out five in seven innings of work.

The Peregrines return to action on Sat. Apr. 2, when they travel to Westville, Ind. for a twinbill with Purdue North Central. First pitch is scheduled for 12:00 p.m