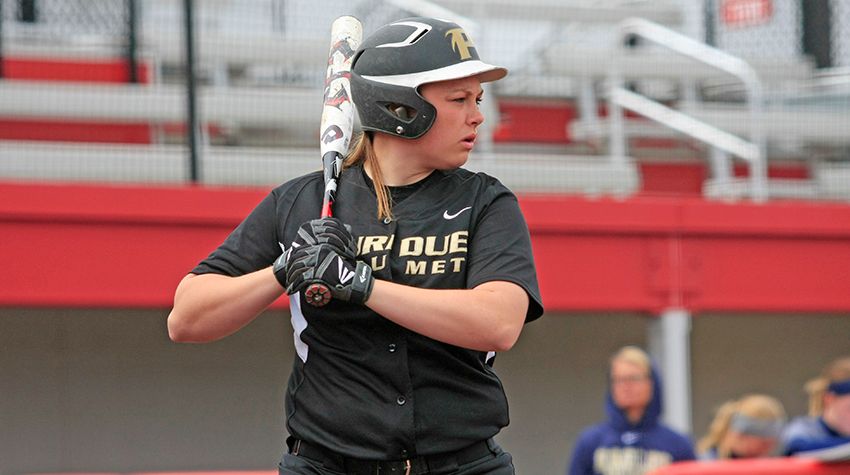 Game 1: Mount Vernon 5, Peregrines 3
After a scoreless first inning, the Black and Gold would score the first run of the game after an error by Mount Vernon helped score Holly Pagan (Bartlett, Ill./Bartlett).

The Cougars would answer in the bottom half of the second inning, after an RBI-single from Allison Harris followed by a 2-RBI single from Cassidy Cain gave Mount Vernon a 3-1 advantage.

Mount Vernon would tack on one run in the third and fourth innings to take a 5-1 lead over the Peregrines.

Purdue Calumet would attempt a comeback in the top of the sixth inning, after a two-run single by Alex Morales (Bartlett, Ill./Bartlett) put the Peregrines within two, 5-3.

The Cougars would stop any more comeback efforts by the Black and Gold for the rest of the game, defeating the Peregrines, 5-3.

Anna Boue’ picked up the win for Mount Vernon on the hill, pitching a complete game and striking out four.

The Peregrines did record 11 hits off of Boue’, led by Pagan who went 3-of-4 from the plate, and Tessa Steffens (Litchfield, Ill./Litchfield) who batted 2-for-3 with a run scored.

Game 2: Peregrines 4, Spring Arbor 3
The Peregrines would jump out of the gate strong in Game 2, capitalizing on Spring Arbor defensive miscues to take an early 2-0 lead over the Cougars.

Junior Hannah Lopez (Granada Hills, Calif./Bishop Alemany) would score the Black and Gold’s third run of the game in the bottom of the second frame, extending Purdue Calumet’s lead to 3-0.

Bekah would put the Cougars within one of the Peregrines, connecting on a 2-RBI double in the fourth inning, making it 3-2 in favor of Purdue Calumet.

A defensive error in the fifth inning by the Peregrines helped Spring Arbor tie the game at 3-3, but the Cougars would return the favor in the sixth, after Purdue Calumet regained the lead after a Mount Vernon fielding blunder.

Carly Murphy (Munster, Ind./Munster) would shut down the Cougars in the seventh, leading the Peregrines to victory.

Murphy earned her second win of the season, after a complete game performance where she gave up just three hits and struck out five.

The Peregrines will return to the field Wednesday, Mar. 9, when they take on Southeastern University in a doubleheader starting at 1:00 p.m. (CT).

After a scoreless first tow innings, the Crusaders opened the scoreboard up in the bottom half of the third, after a Kyle Thurman three-run homer gave Evangel a 3-0 advantage.

They would continue their offensive pressure over the Peregrines, taking on three more runs in the inning thanks to a 2-RBI single by Blake McCarty followed by another RBI single from Austin Alfrey.

Purdue Calumet would try and cut in to the Crusaders lead, after an RBI single from Eric Sickles (Benicia, Calif./Benicia) scored Cody Dykema (Crown Point, Ind./Lake Central), making it 6-1 in favor of Evangel.

Kyle Thurman would tack on another pair of three-run home runs which led the Crusaders to a 12-1 win over the Peregrines.

The Peregrines will return to action on Thurs. Mar. 10, when they face off with Roosevelt at 8:00 a.m. followed by a contest with Trinity Christian immediately following.