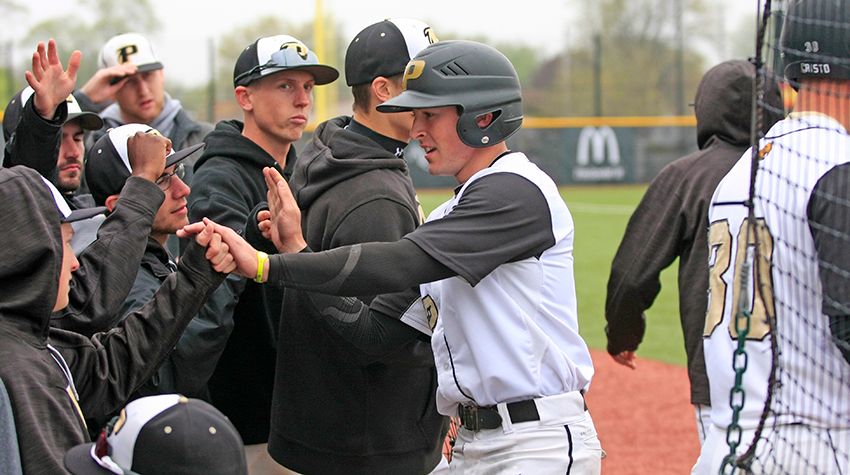 Purdue Calumet Falls at IUSB; Still Clinches CCAC Tournament Berth
The Purdue University Calumet baseball team dropped its regular-season finale against Indiana South Bend Monday, but that didn’t have an effect on the Peregrines’ postseason in a big day for the program.

The Peregrines (19-20, 14-16 Chicagoland Collegiate Athletic Conference) fell at Indiana South Bend Monday, 9-5, but qualified for their second-straight conference tournament after sweeping the Titans in Sunday’s twin bill. Trinity International’s win over Roosevelt Monday helped cement the eighth and final seed for the Peregrines, who will play the No. 1 seed Friday afternoon at 4 p.m. CT in Game 3 of the 2016 CCAC Baseball Tournament in Elgin, Ill., hosted by Judson University.

Purdue Calumet is in its third season as a program and has qualified for both conference tournaments it has been eligible for after playing inaugural 2014 as an independent.

More information on qualifiers and full schedule of the double-elimination will be available after the completion of Tuesday’s regular-season games, which includes a playoff between Olivet Nazarene and Judson for the No. 1 seed in the tournament.

Monday, the Titans (21-30, 13-17) got on the board first with a run in the first inning via Chris Mangus’ solo home run to center field. Purdue Calumet struck back in the third with two runs on three hits, the biggest a Cody Dykema (Schererville, Ind./Lake Central) two-run double down the right field line that gave the Peregrines’ a 2-1 lead.

But IUSB would explode for four runs in the fifth, scoring all of them unearned on one hit and a Peregrine error to regain the lead at 5-2. Purdue Calumet would strike back again in the sixth, plating two runs on a John Cristo (Munster, Ind./Munster) RBI sacrifice fly and a Titans’ error to bring the Peregrines within one, at 5-4.

The Titans would rally once more, scoring another run in the seventh and three more in the eighth before the Peregrines’ tallied their final run in the ninth, on a Avondre Harris (Mishawaka, Ind./Mishawaka) RBI single to center.