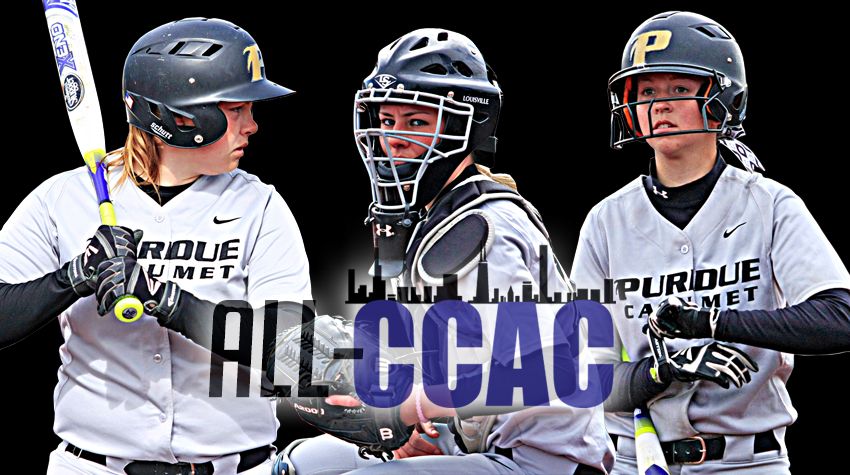 Morales, a sophomore center fielder, started 46 games and recorded a .331 batting average with a team-best 50 hits and four triples (fifth in the CCAC), adding 11 doubles and four triples and 30 runs scored to go along with 23 RBI. She was 4-for-6 on stolen base attempts and near-perfect in center field, where she recorded 129 putouts and a .971 fielding percentage.

Pagan, a sophomore pitcher and utility player, batted .296 with 42 hits, 11 doubles, a team-high eight home runs (tied for second in the CCAC) and 35 RBI (eighth in the CCAC), and she added a slugging percentage of .542. She recorded a team-high 15 walks and in the field, tallied 112 putouts with a .978 fielding percentage, where she primary played in the circle or at first base.

Sardella, a freshman catcher, had a stellar rookie season, batting .312 with 48 hits, a team-high 13 doubles (fourth in the CCAC), two triples, one home run and 25 RBI. She added slugging percentages of .442 and stole three of four base attempts, while finishing the regular-season with a .908 mark behind the plate, where she started every game for the Peregrines (49).

Purdue Calumet finished its regular season 22-27 overall and 11-13 in the CCAC, where it earned its second-straight bid into the CCAC Tournament.

Purdue Calumet Falls in Nine Innings, 1-0, to Top-Seeded St. Xavier
Carly Murphy pitched a nine-inning gem to keep the Purdue University Calumet softball team within striking distance of top-seeded St. Xavier University, but the Cougars prevailed in a tough nine-inning loss in the first round of the Chicagoland Collegiate Athletic Conference Tournament Thursday.

The eighth-seeded Peregrines (22-28) fell to No. 5 St. Xavier (38-5-1), 1-0, as Cougars’ ace and newly named CCAC Pitcher and Player of the Year Nicole Nonnemacher recorded the nine-inning no-hitter in SXU’s victory.

Purdue Calumet falls to the loser’s bracket of the double-elimination tournament, where it will face fifth-seeded Judson, a 8-0 loser to Olivet Nazarene, at 7:30 p.m. tonight in the final contest of the day at the Ballpark at Rosemont (Ill.).

Murphy (Munster, Ind./Munster) threw a game-high 146 pitches in the nine-inning effort, striking out four and scattering nine hits in the setback. Her biggest two Ks came in the top of the eighth, when SXU loaded the bases with one out. Murphy responded by fanning the next two Cougar batters to get out of the jam and the score still tied, 0-0.

St. Xavier would get the winning run from its ace, as Nonnemacher triple to right center field with a runner on first base in the top of the ninth to plate teammate Kasey Kanaga. Nonnemacher would then retire the side in the bottom of the frame with two pop-ups and a game-ending strikeout to seal it.

The eighth-seeded Peregrines (22-29) gave up two unearned runs in the third inning and that’s all fifth-seed Judson (29-19) needed, as the Eagles managed to stay alive in the losers’ bracket of the double-elimination tournament.

Earlier in the day, the Peregrines gave top-seed St. Xavier all they had in a nine-inning, 1-0 loss in a CCAC Day 1 that featured three extra-inning contests. Purdue Calumet was originally scheduled to play Judson at 6 p.m. CT, but the game was pushed back to a 8 p.m. start after Calumet St. Joseph and St. Ambrose played 11 innings.

The Peregrines had a chance to score in the same inning, when Barajas’ double advanced Tessa Steffens (Litchfield, Ill./Litchfield) to third with one out. But Tennyson forced the next batter into a fielder’s choice and the Eagles got the out at the plate, followed by an inning-ending groundout.

Sophomore Holly Pagan (Bartlett, Ill./Bartlett) pitched a solid game for the Peregrines despite the loss, as she didn’t give an earned run in six innings pitched, allowed just four hits and struck out six.