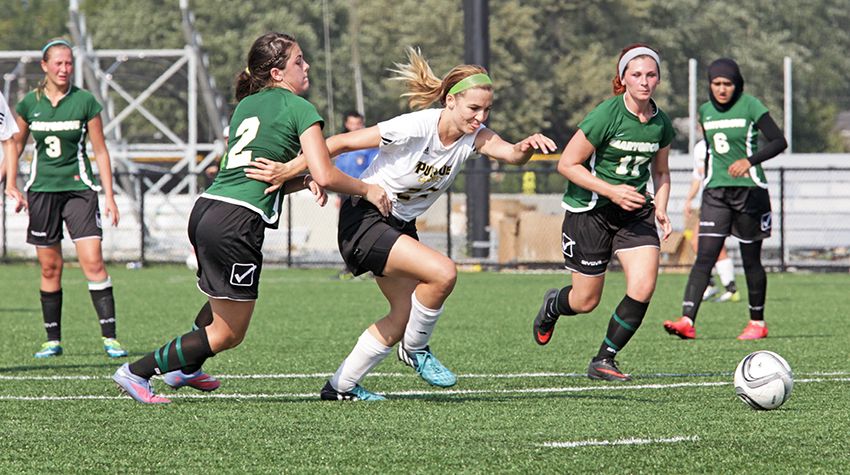 "Obviously it is great to find the back of the net today and get a result," Evans said of the victory, her first at Purdue Calumet. "We got some good minutes out of several people and it is a step in the right direction.

"The next step is to see if we can build on today, work hard in the coming days and show progress heading into Saturday's match."

The Peregrines (1-2, 0-0) picked up their first win of the season in the offensive outburst at Dowling Park, which saw host reach the scoreboard first when Coy (Fort Wayne, Ind./Bishop Luers) connected on a penalty kick in the 12th minute after Gregory (Highland, Ind./Highland) drew a foul in the box. Gregory added her first goal of the game three minutes later in the 15th, putting the ball past the Marygrove keeper after Coy sent in a corner kick in front of the box for an assist.

Graber (Nashville, Ind./Brown County) struck for her first goal of the year on a header in the 16th, as Coy picked up her second-straight corner kick assist of the game. The senior added another score four minutes later, connecting left-footed from about 15 yards out to make the score 4-0 Peregrines.

Just before the half, Coy’s unassisted goal from 20 yards pushed the lead to 5-0 at the break.

Sophomore Shyla Huppenthal (Northglenn, Colo./Northglenn) added her first career goal in the 49th minute, finishing a shot in front of the goal via a pass in from freshman Shelby Ross (Columbus, Ind./Columbus North). After the Mustangs (0-1) used a breakaway score by Raven Buck for their only goal of the contest, Peregrines’ freshman Brianna Leggett (Allegan, Mich./Allegan) connected for her first career score in the 68th on an assist from classmate Marisa Jayne (Hartland, Mich./Hartland).

After that it was all Gregory, as the junior added scores in the 69th (assist from Iridiana Mendoza (West Chicago, Ill./Community)) and the 72nd (assist Leggett) to make the final score in favor of the Peregrines.

Purdue Calumet finished the game with a commanding 37-2 shot advantage and 9-0 edge in corner kicks.

Freshman Lucie Ashmore (Greystones, Ireland/St. Gerard’s School) picked up her first victory of the season, playing 67 minutes in goal. Classmate Kelley Sharp (Seymour, Ind./Seymour) didn’t allow a goal in her relief, playing the final 22 minutes in front of the net.

For Coy's play, which included two goals and two asssists -- her first as a Peregrine -- the freshman was named the team's 'Player of the Match.'

"Shayna found the net twice today and worked hard on both sides of the ball," Evans said of Coy. "She wanted more from herself and her work ethic and communication help raise the level of her teammates." 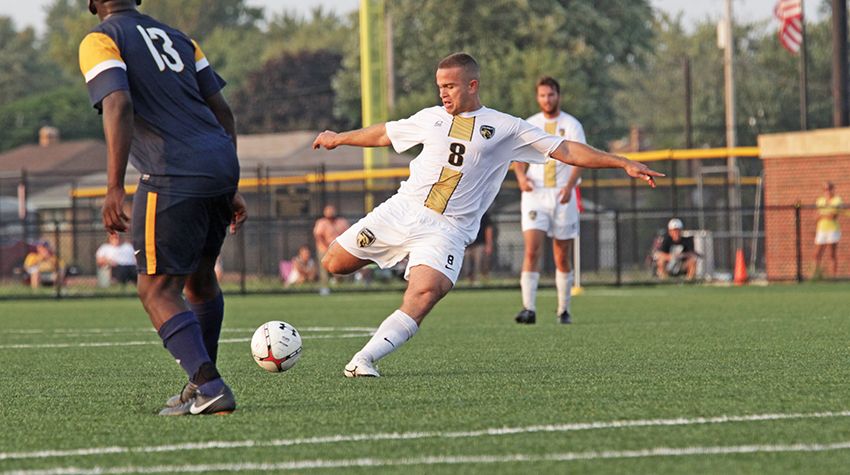 Purdue Calumet Tops Marian 4-0 in Tuesday's Home Opener
The Purdue University Calumet men’s soccer team used three first half goals to gain momentum through out the game to lead the Peregrines to a 4-0 victory over Marian University Tuesday afternoon at the home opener at Dowling Park's Pepsi Field.

Purdue Calumet (2-0, 0-0) used a strong defensive effort along with a solid offensive attack to give the Black and Gold the win at the first-ever men's soccer match at Dowling Park.

“I liked the number of shots and chances we created throughout the game,” Head Coach Ryan Hayes said of the effort.

“It was definitely nice to keep a clean sheet with such a strong overall squad performance.”

Later on in the half, junior Jawayne Spence (Hammond, Ind./Morton) quickly found senior defender Pedro Mendieta (Lynwood, Ill./ Mt. Carmel), who crossed a ball to Nicolau Monteiro (Rio de Janerio, Brazil/ IBMEC) in the middle of the box, where he found the back of the net for his first goal of the season.

Monteiro would tack on another goal in the 35th minute, cutting past three defenders and notching his second goal of the game to put the Peregrines up 3-0 heading into the break.

In the second half, Purdue Calumet used gritty defensive efforts mixed with a free kick from Andres Ayala (San Antonio, Texas/ Ronald Reagan) which ripped the upper 90 right corner of the goal to solidify the Peregrines 4-0 victory.

Sophomore keeper Miguel David (Spring Valley, Calif./Bonita Vista) picked up his first shutout of the year, stopping one shot in a one-sided offensive game, as the Peregrines outshot the Knights (0-3) by a convincing 28-3 margin.

Purdue Calumet will be back in action this Friday, Sept. 4, at 2:30 pm., when the Peregrines host Madonna University (Mich.) in a nonleague match up at Dowling Park.