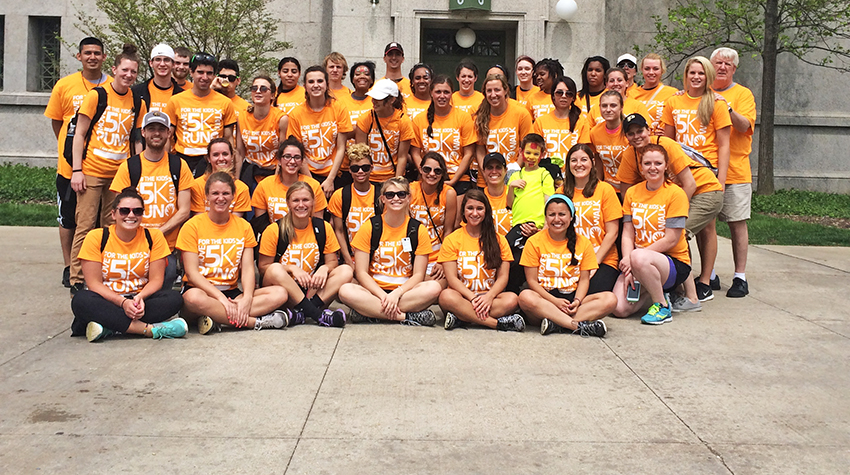 The event capped another fantastic year of community service for the Purdue University Calumet Athletic department, which saw its student-athletes earn over 1,000 hours of community service and participate in more than 20 different causes for the 2014-15 academic year.

For the Move for the Kids 5K, Peregrine student-athletes and staff from the women’s basketball, volleyball, women’s soccer and men’s and women’s cross country teams served as race volunteers for the event, which kicked off its 11th year in downtown Chicago. In 11 years, the race has drawn more than 20,000 participants and raised over $2.8 million to support the hospital’s areas of greatest needs, including a new state-of-the-art hospital, the recruitment of top doctors, research advances, and transitional care for patients.

“Being a part of the Move for the Kids 5K was an unforgettable experience for both our staff and student-athletes,” said Stephanie Beck, Purdue Calumet head men’s and women’s cross country coach and volunteer project organizer. “The student-athletes really enjoyed helping make such a great event run smoothly and as a staff, we were proud to help with a great cause – helping kids.”

This year’s race, held just outside the gates of Soldier Field, raised over $300,000 and featured nearly 3,000 participants.

“It was fun to help such a great cause and cheer on everyone as they finished, especially all of the young kids that were running,” junior cross country runner Justin Peterson said of volunteering at the event. “It was really cool to see that many kids running – I’ve never seen that before at a race.”

The help was greatly appreciated by Lurie Children’s Foundation Development Coordinator, Becky Jarosch, who was impressed with the student-athletes’ willingness to help.

“From setting up tables to staking the Heroes Garden signs, from directing people on the course to handing out pizza, they made such a positive impact on the event and we are so grateful,” Jarosch said.

The Lurie Children’s Move for the Kids 5K Walk and Run is still accepting donations, while the 2016 race date has yet to be announced. Donations can be made by going to the Move for the Kids homepage and clicking the ‘donate & support’ button.

The Move for the Kids Run was just one of many community service projects that saw Peregrine student-athletes participate in 2014-15. Below are a few highlights from the rest of the year:

Greater Hammond Food Depository
Back in December, more than 40 baseball and softball players helped sort food and organize the facility, which provides free food to people and families in need in the greater Hammond area.

R-Dub Club with local Hammond Elementary Schools
Throughout the Spring, 86 Peregrine student-athletes donated their time to making new friends and encouraging local elementary students to read with four visits to each school. Purdue Calumet student-athletes talked about their experiences as athletes, answered questions, and read books with the students.