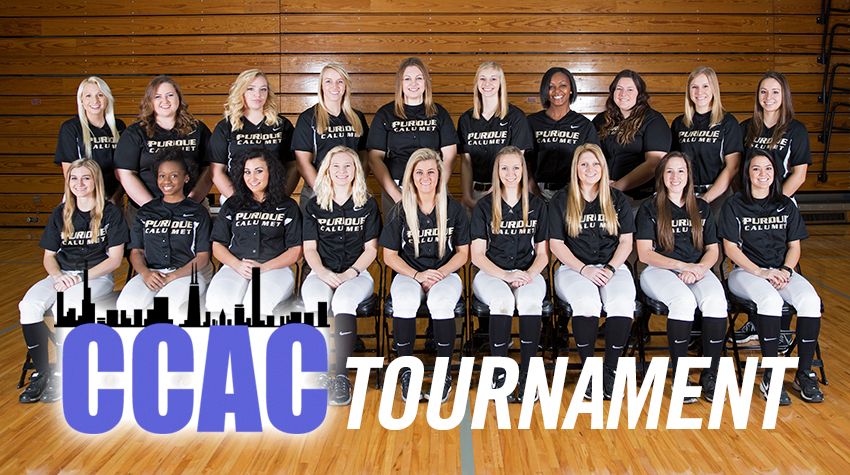 The Purdue University Calumet softball team earned a bid into the Chicagoland Collegiate Athletic Conference Tournament for the second-straight year, as the Peregrines will face top-seeded St. Xavier Thursday afternoon in the first round of the double-elimination tournament.

If the Peregrines were to win, they would face the winner of No. 4 seed Olivet Nazarene and No. 5 seed Judson Friday at 10 a.m. CT in the winners bracket. A loss would drop Purdue Calumet to the loser's bracket, where they would play again Thursday at 6 p.m. against the loser of the ONU/Judson contest.

For the full bracket: http://www.ccacsports.com/article/2725.php

CCAC TOURNAMENT FLASHBACK
Purdue Calumet made a splash in its first-ever CCAC Tournament appearance in 2015, as the sixth-seeded Peregrines stunned three-seed and NAIA National Tournament qualifer Judson 5-0 in the opening round. Purdue Calumet would fall in its next game, a 8-4 setback to Olivet Nazarene, before bouncing back with a 1-0 win over Calumet St. Joseph in the loser's bracket to stay alive in the tournament. Eventual NAIA qualifier St. Francis (Ill.) would end Purdue Calumet's run in a 2-0 setback in the quarterfinals. Alison Kimble and Skyler Woods were both named to the CCAC Tournament Team for their efforts.

LAST TIME OUT
The Purdue University Calumet softball split its final CCAC doubleheader against Trinity Christian April 28. The Peregrines dropped the first game to the Trolls (10-28, 6-18) 2-0, but came back and defeated TCC in Game 2, 7-2.

SCOUTING THE COUGARS
Saint Xavier is led by senior pitching ace and NAIA All-American Nicole Nonnemacher, who has a team-high .420 batting average, 37 RBI, two home runs and 28 runs scored. Nonnemacher also leads the Cougars in the circle with a 1.07 ERA and 21-2 record with 314 strikeouts on the season.

PEREGRINE LEADERS
Sophomore Alex Morales (Bartlett, Ill./Bartlett) headlines the Peregrines offense with a .331 batting average, 23 RBI and 30 runs scored while freshman Olivia Sardella (Dyer, Ind./Lake Central) is batting .312 with 25 RBI and 21 runs scored.Murphy headlines the pitching staff with a 2.59 ERA in 29 appearances in the circle and holds a 12-11 record.

LIVE LOOK
Live stats and audio will be available for all of the CCAC Tournament games at http://portal.stretchinternet.com/puc/