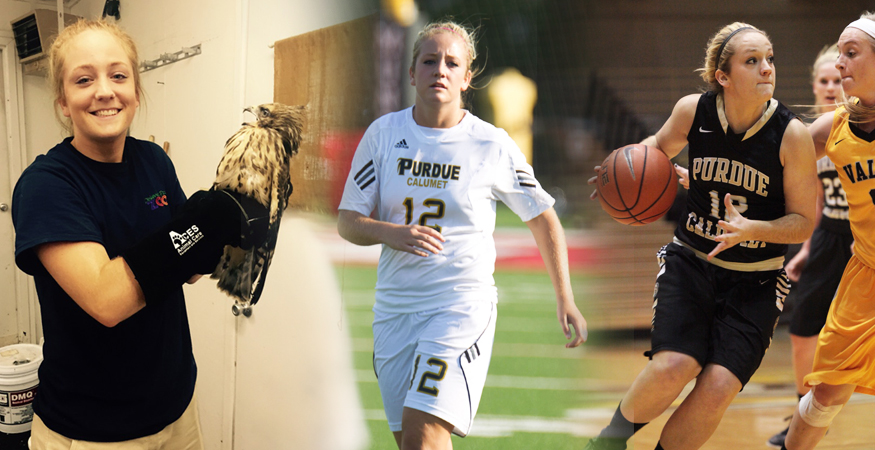 Kami Graber once had a fear of reptiles, mainly snakes. “Snakes get a bad rep,” Graber said, noting her previous feelings on the subject. The key word, of course, is ‘once.’

After completing a three-and-a-half week internship as a hospital intern at the Dickerson Park Zoo in Springfield, Mo., Graber not only overcame that fear, she gained plenty of other knowledge in what turned out to be an amazing summer experience.

“I got to hold a few snakes, and a bunch of bigger lizards,” the Nashville, Ind., native said. “On my very first day, I held a big snake and a big lizard and my heart was just racing.

Graber, a member of the 1,000-point club in Peregrine women’s basketball history and who recently completed her senior season on the hardwood, returns to Purdue University Calumet for one final semester this fall to complete her bachelor’s degree in Biology with a pre-veterinary concentration. Out of eligibility for the Peregrine hoops squad, she’s also planning to suit for another team: women’s soccer.

While sports has been – and will be, at least for one more season – a major part of Graber’s life, she hopes her internship at the zoo will help her prepare for the next chapter: her career.

“I’ve always wanted to be a zookeeper, but after taking several classes (at Purdue Calumet) I decided I wanted to take it one step further and be a vet,” Graber said. On her love for animals, she added: “I just love how you can tell how intelligent they are even though they can’t talk: elephants are one of the most intelligent animals in the world and they’re just awesome to watch.”

During her internship – which helped her gain specific credits needed for her major – Graber was able to spend half of 170 hours shadowing the zoo veterinarian and the other half with the zoo keeper. Her duties included helping during surgeries, minor medical items like checking animals’ heart rates, feeding and cleaning animals, as well as learning how to train them.

One of her best memories of the experience was getting the chance to train a Malayan tiger.

“I was able to give commands to a tiger – I held up my fist up and he would sit down.”

Graber, who carries a 3.5 grade point average in the classroom, was a four-year starter for the Peregrine women’s squad, helping the team to two NAIA national tournament appearances, the first national tournament in program history, and four-straight 20-win seasons. She finished her career as No. 5 on the all-time scoring list with 1,607 points and stands fifth in career assists with 373. She also stands as the all-time leader in career free throws made with 498.

She will play collegiate soccer for the second time at Purdue Calumet, after a year on the pitch in 2013, when she recorded two goals in nine starts for the Peregrines.

The daughter of Barb and Allen Graber, Kami is a 2011 graduate of Brown Country High School (Ind.).