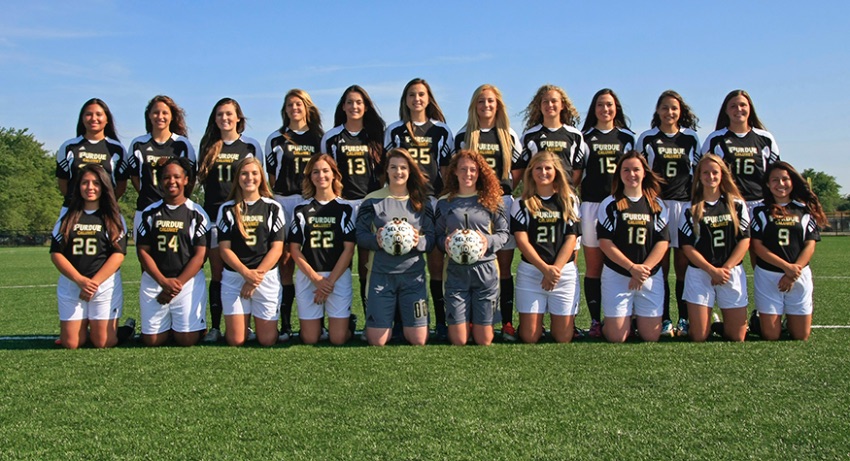 With first-year head coach Kellie Evans at the helm, the Purdue University Calumet women’s soccer team will open the 2015 season this Saturday, August 22, at Marygrove College in a nonleague contest beginning at 2 p.m. CT.

The match will be played at Marygrove Outdoor Athletic Complex, located on the east side of campus at 8425 W. McNichols in Detroit, Mich.

Live video and stats will be provided by Marygrove and are available at http://portal.stretchinternet.com/puc/

EVANS EXPECTATIONS
“Overall the group has been working hard and focusing on the process,” said Evans, who last served as an interim head coach at NCAA Division I Bowling Green State University in 2012.

“The newcomers have brought talent and energy to an already young team and we continue to work to establish an identity as a program, both on and off the field,” she added of the 2015 edition of the Peregrines.

“We will continue to compete in training and know that type of environment will translate to the field on game day. I know the players are eager to play and I am excited to build upon the hard work we have put in during the preseason.”

2014 YEAR IN REVIEW
The Peregrines finished their second season as member of the Chicagoland Collegiate Athletic Conference with a 7-11 overall record and 3-8 mark in conference play in 2014. Purdue Calumet edged conference opponents Calumet College (2-1), Cardinal Stritch (1-0) and Roosevelt (4-3), which placed the Peregrines ninth in the CCAC.

OFFENSIVE LEADERS
Senior forward Kami Graber (Nashville, Ind./Brown County), who recorded two goals for the Black and Gold in 2013, returns to the women's soccer team after finishing a glittering four-year career wiht the Peregrines on the basketball court, where she stands fifth on the all-time scoring list with 1,607 points.

“Kami embodies what a student-athlete should be and provides a great example/leadership for our younger players,” Evans stated of her lone senior.

Junior defender Michelle Wartman (Dyer, Ind./Lake Central) was moved to forward in the middle of last season and notched four goals, placing her second on the team in goals scored and third in total points with eight. Iridiana Mendoza (West Chicago, Ill./Community) adds experience after netting one goal and two assists in 12 starts last season.

DEFENSIVE STAND
Along with Wartman, who will return to the backline, Rachel Gregory (Highland, Ind./Highland) looks to use her speed and experience to assist in ball pressure along with attacking situations. Sophomore Kim Famiglietti (Muskego, Wis./Muskego) and junior Heather Olson (St. John, Ind./Lake Central) also both return to assist in the defensive efforts.

NEW TO THE SQUAD
With a new season comes new faces, and this year’s squad is filled with freshmen that will help make an impact throughout the year. Freshman midfielders Shelby Ross (Columbus, Ind./Columbus North) and Shayna Coy (Fort Wayne, Ind./Bishop Leurs.) bring additional depth to the field to help the Peregrines stay well-rounded.

“Shelby and Shayna bring great vision to the center of the field along with quality distribution,” Evans said. “They both are able to step in a variety of roles/positions and have an impact on the field.

Also new to the 2015 team are Brianna Legget (Allegan, Mich./Allegan) and Marisa Jayne (Hartland, Mich./Hartland), who come to this year's team looking to make an immediate impact on both sides of the ball.

SCOUTING THE MUSTANGS
Marygrove finished the 2014 season 2-15-1 (1-7-1 WHAC) placing them ninth in the conference.

LIVE LOOK
Live video and stats for Saturday’s match, located on Mayrgrove's campus in Detroit, Mich., will be available at http://portal.stretchinternet.com/puc/