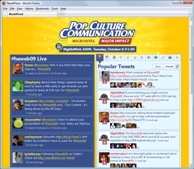 Purdue University’s reputation for innovation is now spreading into the world of social media. The school has developed a tool to complement Twitter by ranking the popularity of messages. A school presser explains:

The first Twitter tool that ranks the popularity of individual messages plans to make the backchannel conversations at conferences and meetings more interesting.

Need4Feed, a new Twitter tool developed at Purdue University, ranks Twitter messages in several ways, allowing users to see what is being said outside of the meeting rooms at a conference.

"Need4Feed lets conferencegoers sift through the noise to find the important things being said," says developer Kyle Bowen, director of informatics at Purdue.

The tool determines popularity by employing an algorithm that analyzes how other Twitter users respond to a message by reposting it, replying to it, marking it as a favorite or whether the message initiates a longer conversation.

Need4Feed analyzes all tweets that include a hashtag, which is the way Twitter users tag a message related to a topic. Hashtags allow messages to be grouped together so Twitter users can follow the topic. Need4Feed examines all of the messages marked with a particular hashtag and provides additional information about those messages.

People using Need4Feed can see the most popular messages even if they are not following the person who sent it.

"If someone tweets a message and there is no one to follow, does it make a sound?" Bowen joked. "Now we can see what’s being said by everyone at the meeting. The tool ranks individual messages and not people."

The tool lists all of the messages tagged for the conference in one window, but a second window offers several additional features for conference Tweetees:

Bowen said conferencegoers don’t need to change their behavior or Twitter settings to use Need4Feed.

"If they are using the conference hashtag they are already participating," he said.