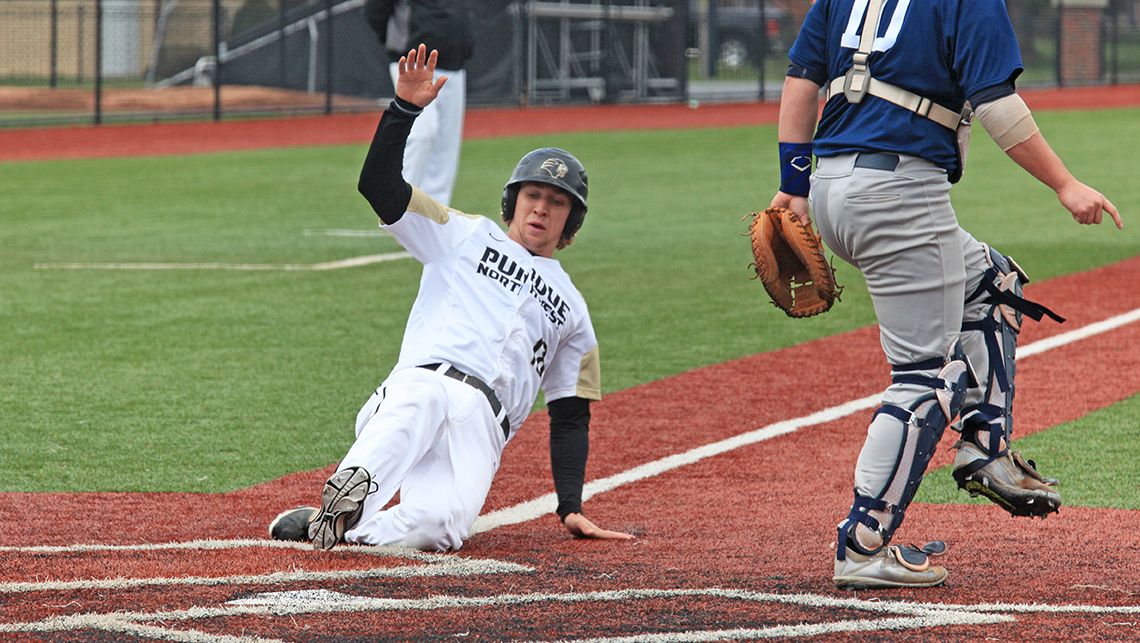 Senior right-hander Matt Sandoval (Highland, Ind./Highland) tossed a two-hit gem in Game 1, striking out nine in the complete-game effort to improve to 5-1 on the year.

GAME 1: PNW 3, ST. AMBROSE 0
Sandoval set the tone early for the Pride in the opening shutout, keeping the Fighting Bees (9-19, 5-3) from reaching second base until the top of the sixth inning.

Freshman Hunter Thorn (Portage, Ind./Portage) would then tack on PNW’s third run with an RBI single to left field to score teammate Larry Crisler (Gary, Ind./Bishop Noll), who singled up the middle with one out and then stole second base.

Thorn would finish 2-for-1 with a RBI and run scored and Crisler went 2-for-3 with a run to lead PNW’s offense, while Crews finished a perfect 1-for-1 at the plate with an RBI and Batistatos was 1-for-3 with a triple and an RBI.

GAME 2: ST. AMBROSE 3, PNW 2
The Bees took the lead early in the nine-inning nightcap, scoring their first run in the second inning when Nick Foster singled to score Matt Miller. SAU would tack on two more runs in the sixth to take a 3-0 lead before PNW would start to make a comeback.

Austin Kordick’s (West Chicago, Ill./Community) RBI-double would plate senior Tyler Crussen (Valparaiso, Ind./Wheeler), who made the most of his pinch-hit opportunity by leading off the inning with a single and stolen base. The Pride would leave two runners on base in the inning despite the run, heading to the eight trailing, 3-1.

PNW would load the bases in the eighth thanks to two walks by Cody Moskovsky (St. John, Ind./Bishop Noll) and Jonny Albers (Waterloo, Ill./Waterloo) and a pinch-hit single by Anthony Quintero (Griffith, Ind./Griffith), but couldn’t bring in a run as SAU’s Tyler Bromer closed out the inning with a fielder’s choice.

The Pride would have one last chance in the ninth as Kordik doubled to open the frame, setting up runners on second and third after a Crisler hit-by-pitch and ensuing wild pitch to move the runners. Senior Jake Lindeman (Crown Point, Ind./Crown Point) then delivered the big hit, a line drive to left that scored Kordik but Crisler was cut down at the plate by a stellar throw from the Bees’ Zach Hart.

Kordik led PNW offensively, finishing 2-for-5 with a double, run scored and an RBI and Lindeman was 2-for-4 with a RBI.