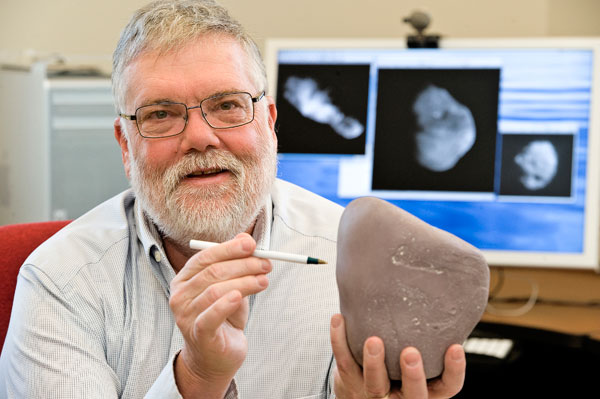 A Purdue University professor and student will be among the first to see close up images of the comet Hartley 2 from NASA's Deep Impact spacecraft on Thursday.

Jay Melosh, a distinguished professor of earth and atmospheric sciences and physics, is part of the science team evaluating the comet during the mission. This marks only the fifth time in history that a spacecraft has been close enough to take images of a comet's nucleus.

"There are only detailed images of three comets, and so far they have all been different," Melosh said. "Even as the spacecraft is approaching the comet we are making some new discoveries and seeing things we've never seen and don't understand. We can only predict that things will get more intense as we get closer.''

For the mission, called EPOXI, the Deep Impact spacecraft is speeding toward the comet at more than 27,000 miles per hour and will reach its closest distance, within 434 miles of the comet, at 9 a.m. Eastern time on Thursday (Nov. 4).

The spacecraft will be at its closest range for only about five minutes. Melosh said that although the spacecraft will return thousands of images of the comet, only about five really good close-ups are expected due to the very high speed of travel. The 19-member science team will download and evaluate several pictures immediately and will continue to retrieve and analyze data from the event over the next few days.

Tim Bowling, a student pursuing a master's degree in earth and atmospheric sciences, is with Melosh at mission control at NASA's Jet Propulsion Laboratory in Pasadena, Calif.

"Understanding comets, which were formed when the solar system was formed, is key to understanding how the Earth was formed," Bowling said. "As we learn more about their composition, it will have echo effects throughout geological history and will help to constrain some of the theories in the field."

Comets stay, for the most part, millions to billions of kilometers away from Earth, so even the most powerful telescopes can't get very detailed images, he said. Close-up images of Hartley 2 will provide invaluable information about the comet's surface characteristics and the mechanics of its behavior.

Melosh's expertise lies in understanding what causes jets of gas and dust to burst from comets and, in 2008, was the first to publish a probable mechanism.

"Despite the way it was portrayed in the movie 'Armageddon,' we think these jets are actually very cold volcanic eruptions," Melosh said. "It is a very poorly understood phenomenon and we hope to get some images of these outbursts on Hartley 2."

Bowling plans to pursue a doctoral degree after completing his master's degree in earth and atmospheric sciences this spring.

"This is an incredible opportunity to learn from the best and brightest scientists," Bowling said. "In this field, especially, the more you learn, the more you realize how little you really know. Something unexpected always happens and the new results will dictate the direction of the work."