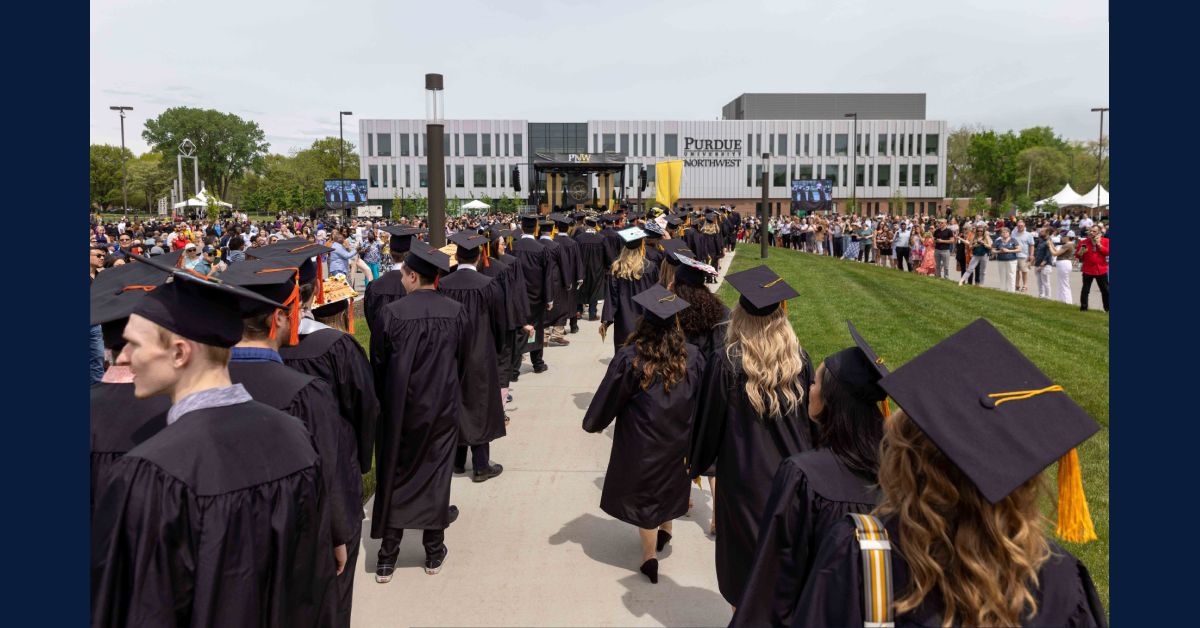 Purdue University Northwest (PNW) graduates should possess three key character traits — integrity, respect and courageousness — in order to be more successful in their careers and lives, keynote speaker Alfredo “Al” Sori, a 1989 PNW graduate, prescribed to the Class of 2022 on Sunday, May 15 at PNW’s spring commencement ceremony.

Sori, who graduated from PNW with a bachelor’s degree in construction management, was a longtime leader and manager of large-scale construction operations and industrial engineering projects with Kiewit, Inc. He most recently served as division manager of Kiewit subsidiary Mass Electric Transportation before retiring.

“When I graduated from this university 33 years ago, I remember having a great appreciation for my mom, who made sacrifices to make sure I obtained my degree,” said Sori. Sori also recalled how his mother found a home for his family on Magoun Avenue in Hammond, which allowed him to easily commute to and from campus.

Sori noted his parents’ own actions as examples that highlighted his three recommended character traits. Sori said his father exhibited incredible courage when he moved his family from Cuba to the U.S. nearly 56 years ago, “with only a few days of clothes and nothing else.” Sori said his father, whose primary language was not English, became a proficient speaker in three years and rose in the ranks at Franciscan Health Hammond hospital.

“Often we avoid situations that frighten us, holding us back from our true potential. We can’t be limited by things that intimidate us. Challenging yourself can help you overcome your fears and allow you to perform at higher levels than you ever thought were imaginable.”

Sori also expanded upon integrity and respect as complementing traits that build cooperation, teamwork and respect.

“I have witnessed when a person incorporates integrity in their day-to-day lives, they always try to find the right thing to do, no matter how difficult of a situation they’re in. Their actions are consistent with their words, and they are fully transparent.

“On the other hand, someone with true integrity knows that everyone deserves respect. By respecting the people we work with every day, it promotes trust and improves team morale in the workplace.”

Sori closed by encouraging graduates to be bold going forward in their professional careers.

“Remember to be courageous and don’t let failure stop you. We all fail at some point, but it’s how well we bounce back from failure that really matters. Class of 2022, I challenge you to be thoughtful of these key character traits.”

The university hosted an outdoor ceremony south of the Nils K. Nelson Bioscience Innovation Building on the Hammond campus.

Read more stories featuring PNW graduates and view the video recording of the ceremony at pnw.edu/commencement-live.

Nine students were presented a Chancellor’s Medallion during commencement for earning the highest grade point average in each of PNW’s five academic colleges.

The medallion recipients are:

Purdue University Northwest (PNW) is a premier metropolitan university dedicated to empowering transformational change in our students and in our community. Located in Northwest Indiana, near Chicago, PNW values academic excellence, supports growth, and celebrates diversity. For more information about PNW, visit www.pnw.edu.