Dr. Richard Rupp, the Friday University Executive Producer and Associate Professor of Political Science, hosted the first of two Fridays that kicked off this year’s annual Friday University program. The aim of the program is to engage the local community in ongoing learning through many different methods.

Classes, expert panel discussions, and interactive culinary workshops are just a few of the many elements weaved into the detailed program itinerary. Many of the attendees, such as Peggy Jones, are devout return visitors. Both Peggy, a graduate of Purdue University Northwest, and her close friend Cindy, a graduate of Purdue University’s West Lafayette campus, have been to several Friday University programs. When asked why she returns year after year, Jones pointed to several reasons including learning about investments, music/musical history, and simply meeting other like-minded individuals with similar interests.

“When you learn people’s culture, beliefs, and values you learn more about them,” said Jones. “But more importantly, [you learn] why they live the way they do.” 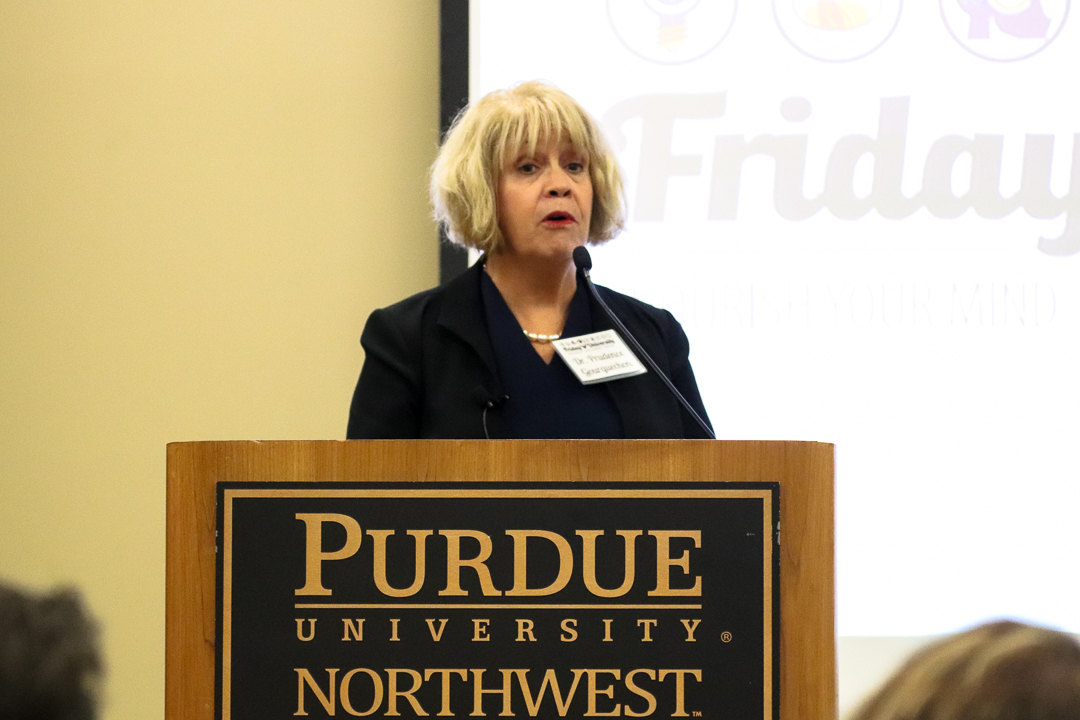 Of the morning events, one portion consisted of a class titled “Objectivity, Analysis, and Discernment in the Age of Trump” presented by Dr. Rupp, Dr. Lisa Goodnight, Associate Vice Chancellor of Student Affairs and Senior Dean of Students, and Dr. Prudence Gourguechon, past President of the American Psychoanalytic Association. During this portion of the event, there was an excellent discussion on rhetoric and rhetorical criticism that focused on the elements that many individuals in power employ to play on the emotions of their audiences.

Additionally, Dr. Prudence dove into the question of “Why do people do what they do?” Her background in psychiatry and psychoanalysis led her to the Army Leadership Manual as a blueprint for gaining the answer to this question. In leaders, we look to those that evoke sensations of trust, discipline, self-control, and empathy—and throughout her discussion she elaborated on these qualities. 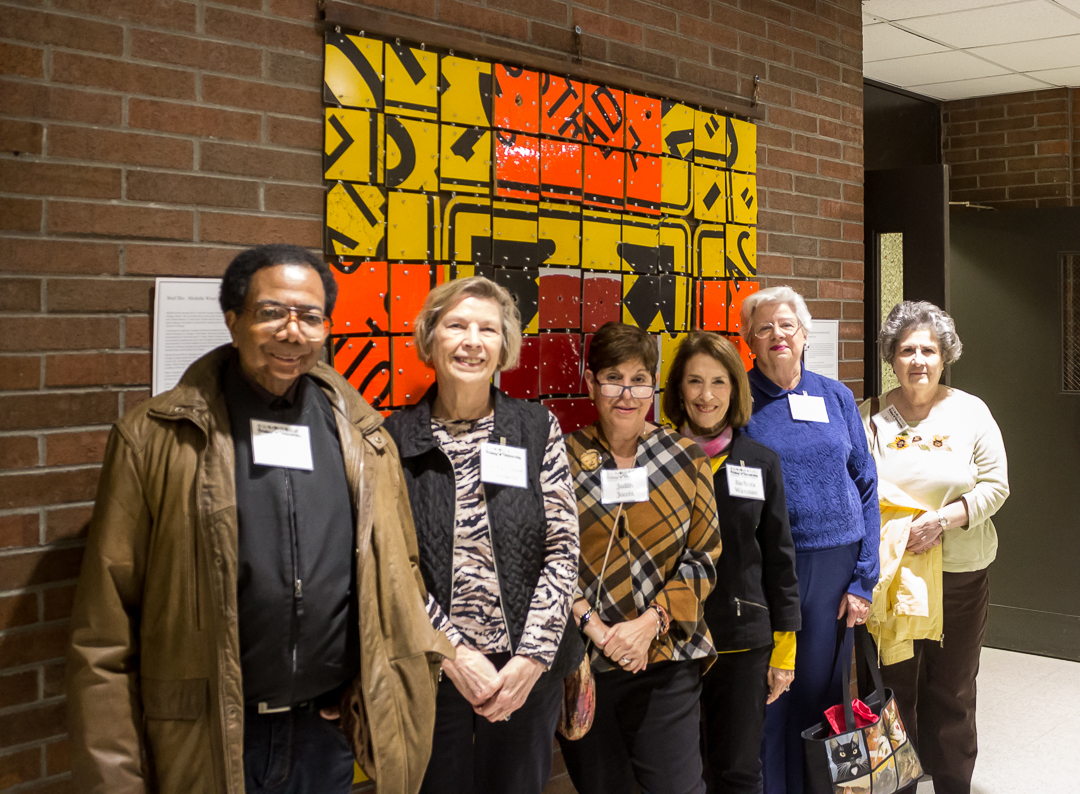 In one of the more “active” morning events, Mrs. Judith Jacobi, Assistant Vice Chancellor of University Art Collections and Special Programs, led an interactive tour which included the viewing of several sculptures and works of art found across the campus. Pieces which ranged from the prestigious artwork of the Zhou brothers, a sibling contemporary art duo considered by many to be the most accomplished contemporary artists alive today, to sculptures and artwork created by regional artists which are leased by the university as means to give both the exposure and viewing platform that many young artists struggle to find. 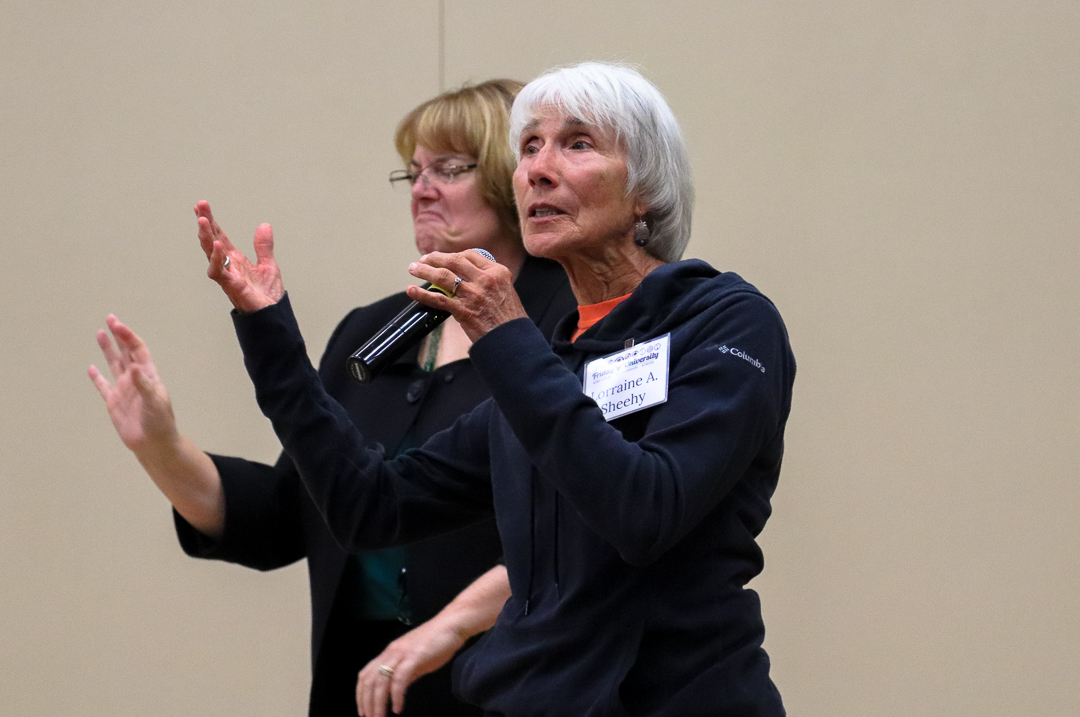 Playing off the Zhou brothers theme “liberty through creativity,” when Judith asked a group of students their interpretation of this phase one of the responses that stood out to her was, “freedom to express.” A fitting reply as the campus has and continues to freely display artwork that captures the hearts of both students and visitors alike. 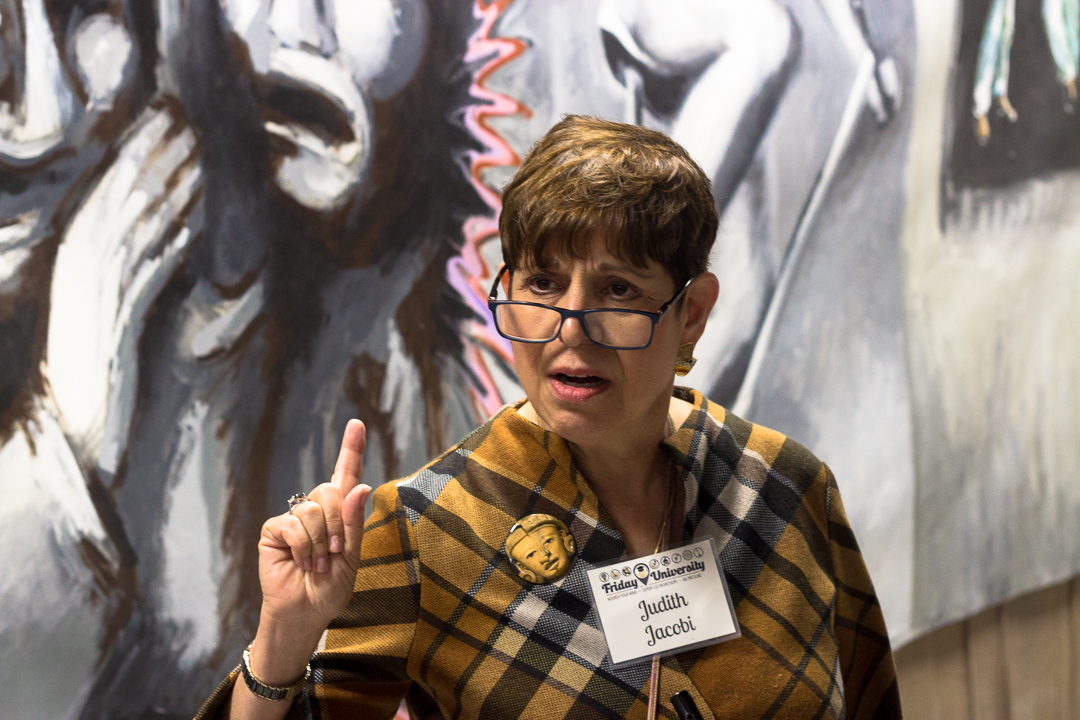 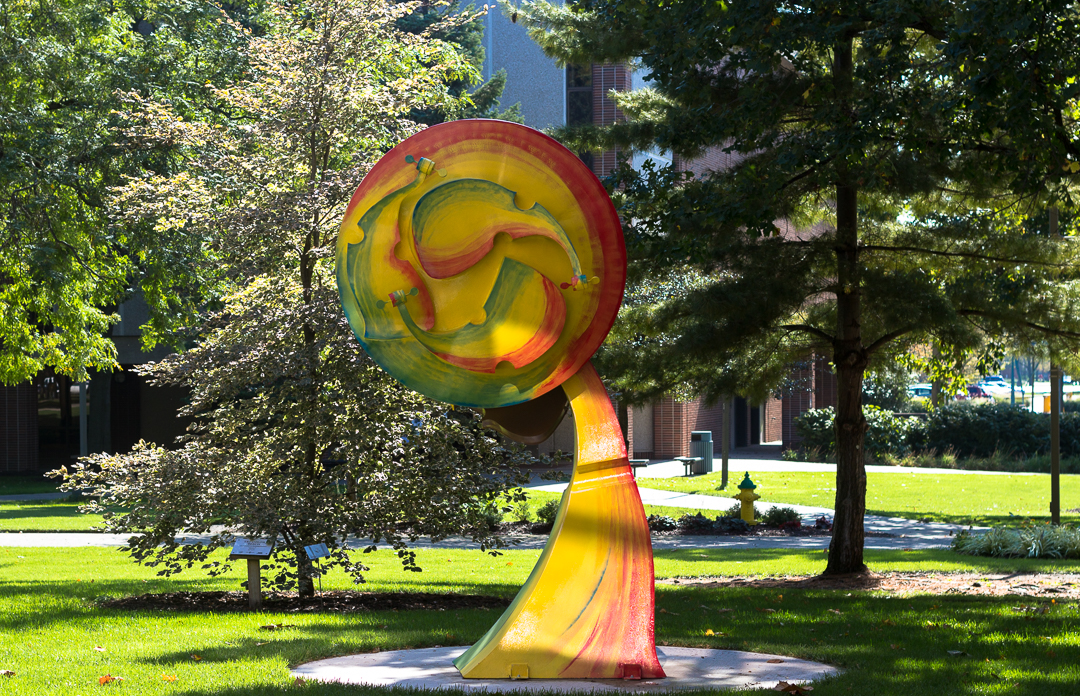 Rounding out the morning events included a panel presented by The Times Media Company where they discussed the ever-changing state of print news and how they cover their topics. Several members of their news team were there, and among the topics of discussion they highlighted was the integration of social media and digital news into their platform and how technology has allowed them to reach a greater audience while also allowing them to reach consumers with breaking news much quicker than we have seen in the past. 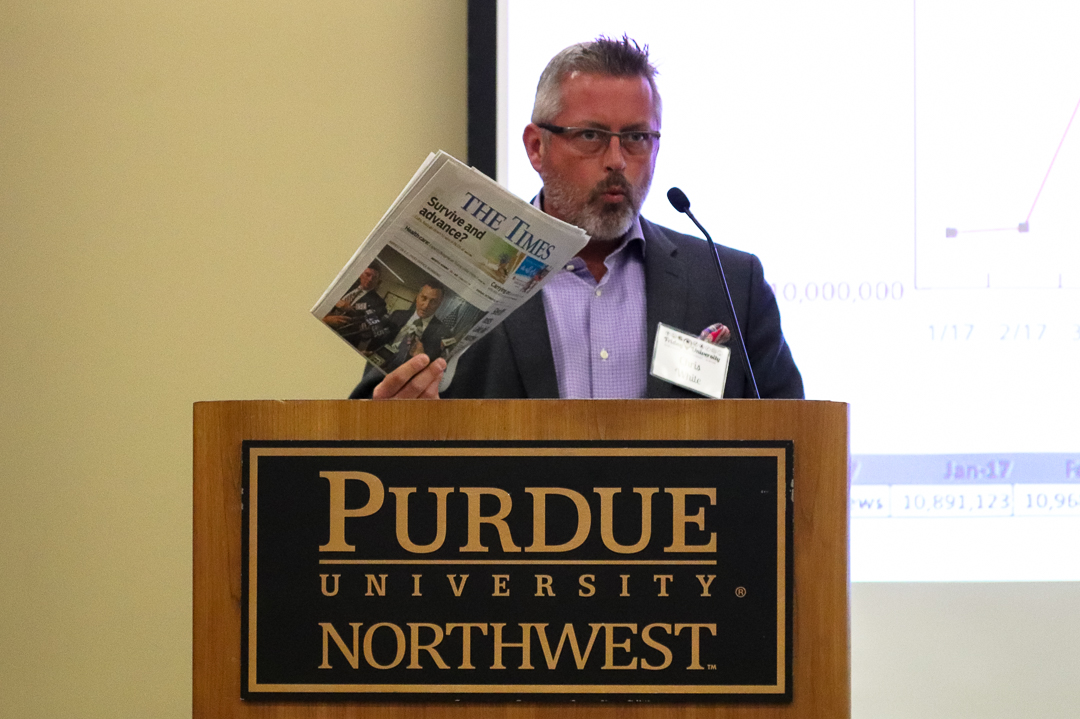 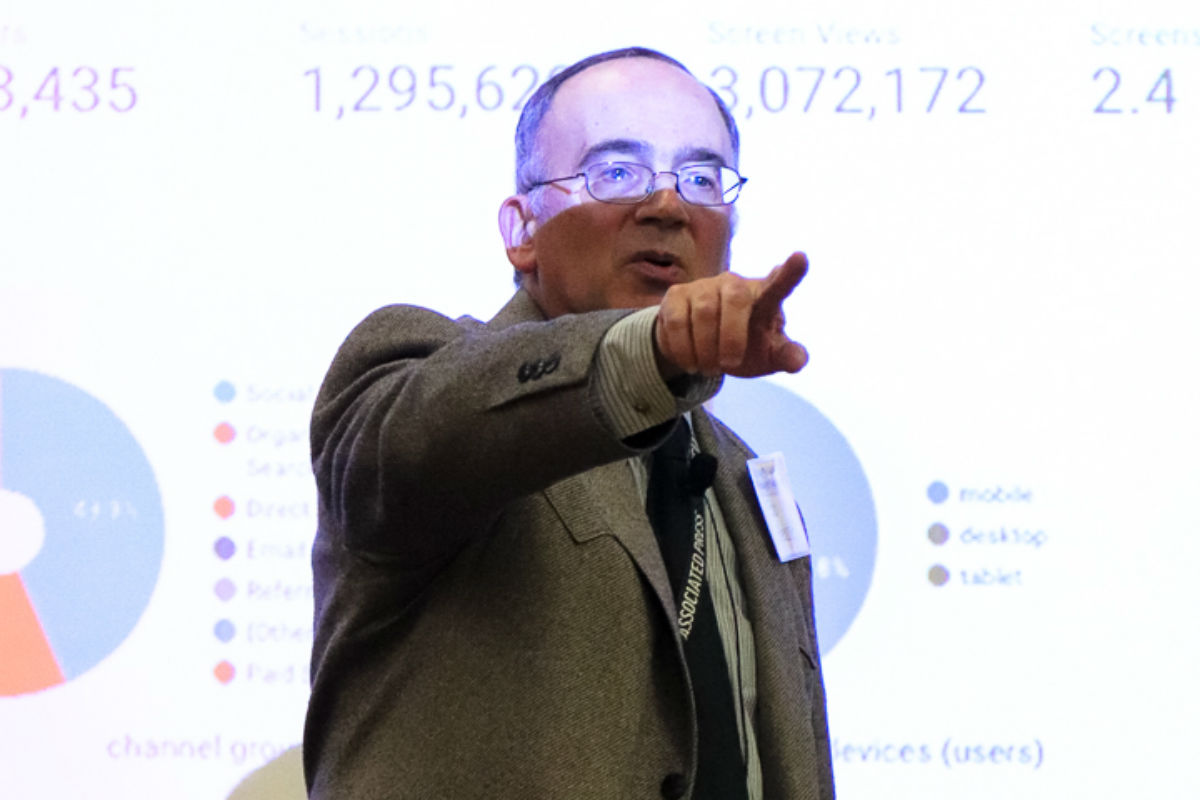 The Friday University program has been a campus staple at Purdue Northwest University for years, evident by many faithful attendees continuing to return annually. For individuals looking to rekindle the memories of yore and those days of being a university student, this program offers that and much more. The entire event is a journey of art, education, and culinary experiences that award attendees with both knowledge and culture. Hosted annually, the first Friday for this year’s event may have already come and gone, but the good news is that a whole host of similar activities are scheduled again for next Friday, October 20th.