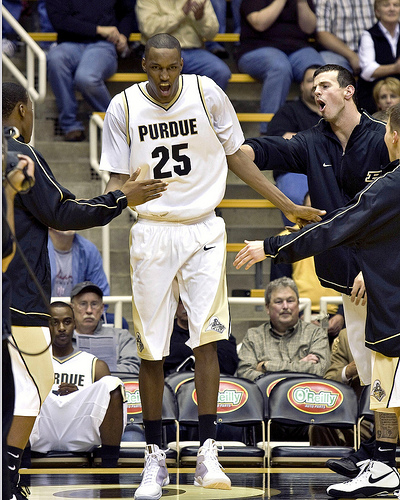 Purdue senior forward/center JaJuan Johnson has been named to the Associated Press Preseason All-America team, the organization announced on Monday.

One of two Purdue players to earn Preseason All-Big Ten accolades last week, Johnson paced the Boilermakers in rebounds a year ago (7.1 rpg) and ranked third on the team in scoring with a career-best average of 15.5 points per outing. The Indianapolis native led the Big Ten in blocks per game in league play (2.0 bpg), and will enter his senior season ranked second on Purdue’s career list with 184 rejections.

He is a two-time All-Big Ten selection, including first-team honors in 2009, and has earned a spot on the Big Ten All-Defensive Team in each of the last two years.

Johnson spent the summer of 2010 refining his game against the U.S. National Team, traveling to Las Vegas and New York as part of the U.S. Men’s Select Team to help Team USA prepare for its gold-medal winning run at the FIBA World Championships in Turkey.