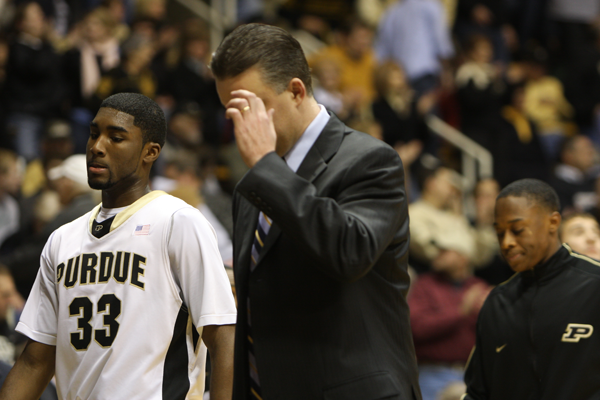 Purdue senior guard E’Twaun Moore has been selected as one of just 30 men’s candidates from across the nation for the 2011 Lowe’s Senior CLASS Award, the corporation announced on Wednesday.

To be eligible for the award, a student-athlete must be classified as an NCAA Division I senior and have notable achievements in four areas of excellence – classroom, character, community and competition. An acronym for “Celebrating Loyalty and Achievement for Staying in School,” the Lowe’s Senior CLASS Award focuses on the total student-athlete and encourages students to use their platform in athletics to make a positive impact as leaders in their communities.

A Preseason All-Big Ten selection, Moore was also an honorable mention AP All-American and first-team All-Big Ten selection in 2010. He earned John Wooden Team MVP honors last season in a vote by his teammates after becoming just the third player in program history to lead Purdue in scoring and assists in the same season. The East Chicago, Ind., product started all 35 games for the Boilermakers in 2009-10, ranking sixth in the Big Ten in scoring (16.4 ppg) and ninth in steals (1.5 spg), while pulling down an average of 3.8 boards per contest.

Off the court, Moore became the eighth Purdue player since 1972 to earn Academic All-America honors when he was awarded second team accolades from ESPN The Magazine.

Moore is the second Boilermaker in as many seasons to be named a candidate for the Senior CLASS Award. Former Purdue star Chris Kramer was named a finalist for the award following last season, traveling to Indianapolis to be honored as part of the 2010 Final Four festivities.

The candidate class will be narrowed to 10 finalists midway through the regular season, with those names comprising the official ballot. Ballots will be distributed through a nationwide voting system to media, coaches and fans, who will select one finalist who best exemplifies the award’s criteria.

Lowe’s will announce the winner of the Senior CLASS Award at the 2011 NCAA Men’s Final Four in Houston.