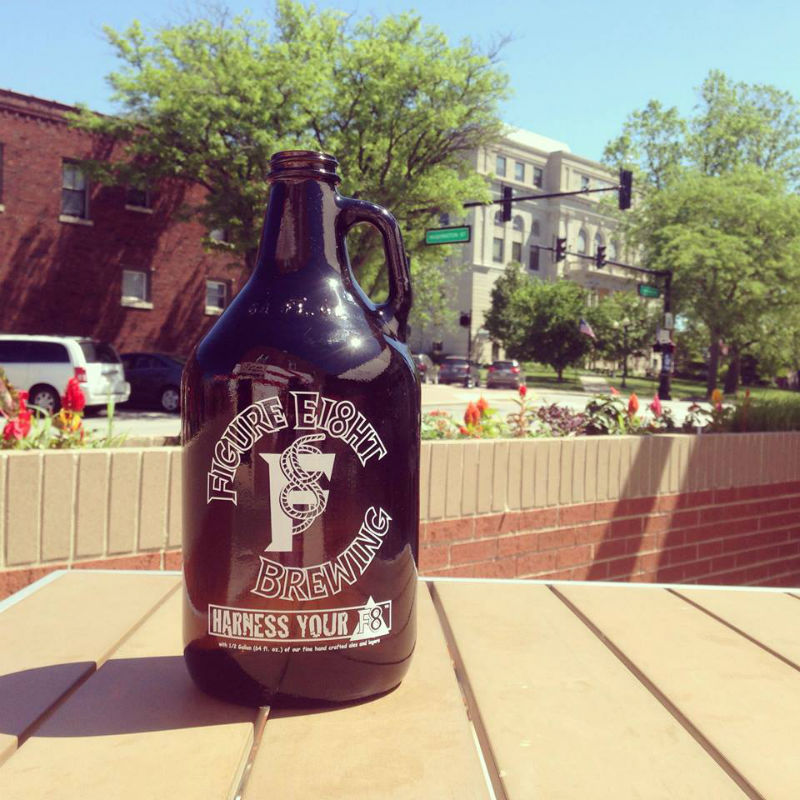 I’m very excited to be writing another article for ValpoLife after a very long hiatus. Not since 2011 have my words graced these hallowed pages. My last article is posted here.

You probably have guessed that I have not stopped talking about the same topic: Beer.

I have loved beer ever since I was legally allowed to. Attending Ball State University in Muncie, Indiana, I visited a local haunt called The Heorot that changed my perception of what beer actually was. Sure, I knew it to be a liquid that was brewed to bring pleasure to the masses, but I didn’t know what it represented spiritually. These were the 3 main lessons I learned:

2. Beer should not only taste good, but make you feel good.

3. Beer does NOT start and stop at the American lager category.

It wasn’t until I began visiting my local brewery, Figure Eight Brewing, that I began to see the craft beer explosion as something more constructive and economically viable. Beer brings us together socially and helps to stimulate the local and state economies. In the summer of 2012, I started working for Figure Eight Brewing in various positions, including as a server and a cook. I also bugged Mike Lahti (Head Brewer) every free weekend I could to learn as much as possible about the industry. I was honored to be offered the opportunity to sell Figure Eight as the Purveyor of F8 (aka The Traveling Salesman, aka Outside Sales Rep), and I’ve been selling craft beer made locally in Valparaiso since January of 2013.

In my mind, one thing has changed in those 3 and ½ years: my perspective of the craft community. When Figure Eight first opened its doors in March of 2010, there were 39 breweries in operation in the state of Indiana. Today there are over 110 breweries with more on the way! According to the Brewer’s Association, the trade association representing small and independent American craft brewers, in 2014 craft brewers reached 11 percent volume share of the marketplace. “With the total beer market increasing only 0.5 percent in 2014, craft brewers are key in keeping the overall industry innovative and growing.” - www.brewersassociation.org With more and more people discovering the wonder and excitement of their local craft brewery, more money is being reinvested into the local community and not being sent elsewhere.

Part of my job is to find the most craft-focused restaurants, bars, and stores across the state that truly believe in what craft beer means to the community and that will support locally made brews. We are proudly served by these fine Valparaiso locations.

If you are traveling elsewhere in the state of Indiana, here are some must-stop places!

Pat’s Liquors 1 US-20, Porter, IN An amazing liquor store that packs the most selection of craft beer, wine, and spirits in a small space. Liz and her staff are quite knowledgeable and are happy to help!

Southshore Gary Railcats at U.S. Steel Yard One stadium Plaza, Gary, IN Not only is the U.S Steel Yard the place to be in the summertime for catching a family fun game of minor-league baseball, but Figure Eight is a proud sponsor and brews the proprietary Railcats Pale Ale served at all home games.

Latitudes 5987 Dune Harbor Dr, Portage, IN Overlooking the harbor at Marina Shores, Latitudes offers both indoor and outdoor fine and casual dining and events. Enjoy the laid-back ambiance of dining along the water in the formal dining room, the casual Starboard room or the kick-your-feet-up feel of the Beach House.

Beer Geeks 3030 45th St, Highland, IN If you haven’t been to Beer Geeks then you quite possibly haven’t lived. Twenty rotating craft taps, rotating food menu, and live blues music. Jason will get you taken care of.

Decoy’s Pub 1729 US-20, Michigan City, IN Do you like sports? How about Billiards? Then head over to Decoy’s for some classic pub grub and Snake Pro - Double IPA to wash it down.

JK O’Donnells 121 W Wayne St, Fort Wayne, IN The saying goes, Go on out, but bring some sun back with you. In a pint, that’s the story of J K O’Donnell’s which began as owners Scott and Melissa Glaze, walked the Irish countryside in Castlebar. Pirate’s Pils - Bavarian Style Pilsner is always on tap to go with your traditional Irish fare.

Rudy’s 409 W Brackenridge St, Fort Wayne, IN Right across the street from the Tincaps Stadium in downtown Fort Wayne is a residential home turned business. If you enjoy all Indiana craft beers, fine wines, fine cigars, and chocolates.... then stop in at Rudy’s. You won’t be disappointed with their outdoor beer garden. The best kept secret in Fort Wayne.

Black Sparrow 223 Main St, Lafayette, IN Has rotating craft beer taps and has been proudly carrying local Indiana brews for years. Right on Main street, this is the place to be for great food, great beers, and making great memories.

Professor Joes 648 Main St, Lafayette, IN If you love Greeks Pizzeria in Valpo then you will love Professor Joe’s. The owner and manager were inspired by the great pizza that Mike Karamesines has been making for years. A clean Greeks Pizza box proudly sits in their office. Sports, pizza, and beer. There is no better place to catch the game.

Twenty Tap 5406 N College Ave, Indianapolis, IN Thirty-Eight rotating taps, inspired food, and all in Indy’s Broad Ripple neighborhood. The bartenders are knowledgeable, friendly, and are great at helping you navigate the selection. Consider this place the Embassy of Craft Beer in Indiana.

End of Line Public House 1105 E Shelby St, Indianapolis, IN Housed in the Historic Fountain Square Building in Fountain Square, Chef Pete makes some mean dishes to pair with 20 taps of craft beer. After you finish up head next door to the Duckpin Bowling Alley. Think vintage bowling with smaller bowling balls and you get three shots at knocking down all 10 pins!

There are of course many, many more locations, where you can enjoy Figure Eight and the number is steadily growing. We are always happy to talk with business owners that have a love and passion for craft beer...and of course we would also love to see you at our brewpub in downtown Valparaiso. Let’s have a pint and have some laughs.

Neil Davey is a local Valparaiso, IN resident with a passion for craft beer. A Food and Hospitality Major from Ball State with a Philosophy Minor, he lives with his beautiful wife and two ugly cats. Currently living out his dream as a barrel throwing gorilla, he enjoys long walks on the beach. Or so he tells us...