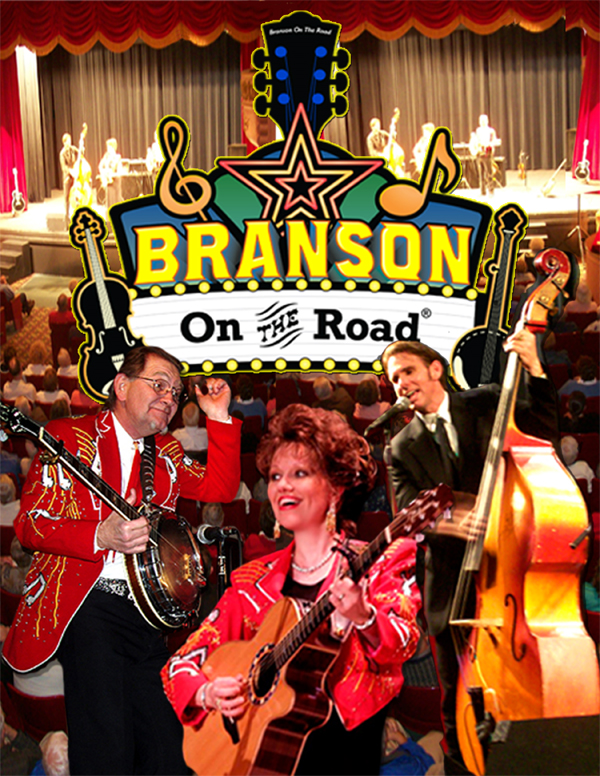 What do you get with you bring together a fiddle, mandolin, banjo, guitar, upright slap bass, rhinestone costumes, hilarious comedy and great classic country, bluegrass, rockabilly and gospel music at the Memorial Opera House in Valparaiso on November 7 & 8, 2009?  Only one answer - Branson On The Road® is back in town!

Branson On The Road®, the hit touring show direct from the live music capital of the world, Branson, Missouri, is stopping in Valparaiso for their fourth appearance at the beautiful Memorial Opera House for two shows on Saturday, November 7th and a Sunday matinee on November 8th.

"It's like a family reunion coming back to the old Opera house and seeing so many familiar faces and making new friends every time we're in Valparaiso", said Debbie Horton, co-host of the show.  "This time, we've added on a second matinee on Saturday, November 7th.  People really enjoy coming to a show during the day and getting home before nightfall.  Also, the ticket prices are the same as last year - there is also a great group ticket price available for groups of 10 or more."

"I'm thrilled they're coming back", said Brian Schafer, Facility Manager.  "As with the previous Branson On The Road® performances, the group is again donating a portion of the Saturday night ticket sales back to the theatre and we appreciate that so much.  Folks around here just love this group and their music.  If you've never seen Branson On The Road®, you have three good chances to see them here at the Memorial Opera House".

Branson On The Road® has over 20 years of experience of performing at the top theatres in Branson on the famous 76 Country Music Boulevard (known as "The Strip"), and is the first national touring show named for the famous city.  The show delivers the Branson traditions of good, clean, family fun wherever they go...and they go all over the US and beyond!

Those seeing a Branson On The Road® show for the first time, can not only expect great music but plenty of hilarious comedy every step of the way.

Branson On The Road® is the best way to experience a Branson show right in Valparaiso!  For a couple of hours you can forget all about your troubles and have good time – laughter is the best medicine.

“We reside in the live music capital of the world, Branson, Missouri”, said Debbie Horton, “and realized that there are many people who will never have a chance to visit Branson personally and with the economy the way it is today, we decided to bring our Branson stage show directly to them.  We have many new songs on the show this year and recently taped a television program that featured many of these songs that we will be performing at the Opera House.”

Branson On The Road® are regular performers on the national television show, "Midwest Country" on the RFD-TV network seen in over 100 million homes.

Debbie Horton holds the distinction of being the only woman to have played lead guitar for the great Johnny Cash.  She hosted her own show at the old Boxcar Willie Theater in Branson and has performed on the famous Louisiana Hayride and Ernest Tubb Midnight Jamboree in Nashville.  She was a radio DJ in Norfolk, Virginia and acted as MC for concerts with Kenny Rogers, Hank Williams, Jr., the Oak Ridge Boys, and many more.  Among her other credits, Debbie is an accomplished songwriter.  She has had her songs recorded by Wanda Jackson, Norma Jean and many other country singers.

Donnie Wright is an expert, sought after, respected musician, arranger and is versatile on many instruments including fiddle, mandolin, guitar, banjo and bass and has been part of the Branson music scene for 40 years.  He provides a good deal of the comic relief on the show with his mischievous antics. Among his long list of credits are performances at The Grand Ole Opry in Nashville, The Presley's Show in Branson, The Pine Mountain Jamboree in Eureka Springs, and a long-standing run at The Golden Nugget in Las Vegas.  Donnie has been nominated for a Lifetime Honors Award for his contribution to music in the Ozarks by the National Endowments of the Arts in Washington, DC.

Brian Capps plays upright bass and sings songs reminiscent of Marty Robbins and Hank Williams.  Brian's latest recording reached the Top 10 on the Americana Charts and is part of the music rotation on XM Radio.

Below is information regarding Branson on the Road®: