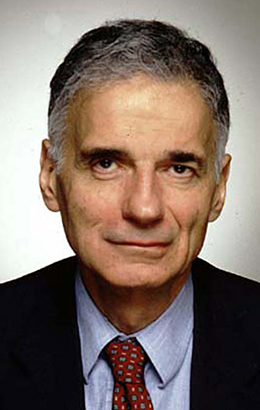 "Corporatism and Social Class" is 4 p.m. in the Purdue Memorial Union's South Ballroom, and is free and open to the public. A book signing will follow at 6 p.m., and Von's Book Shops will sell copies of "Only the Super-Rich Can Save Us!" and "Getting Steamed to Overcome Corporatism: Build it Together to Win."

In 1965, Nader published the book "Unsafe at Any Speed," which documented how the auto industry produced unsafe vehicles. The book inspired congressional hearings and a series of automobile safety laws passed in 1966. Nader, an attorney, continued as a well-known consumer advocate working on issues related to motor safety, the Safe Drinking Water Act, the Environmental Protection Agency, Consumer Product Administration, and the Occupational Safety and Health Administration.

Nader's original research organization is the Washington, D.C.-based Center for Study of Responsive Law. Since 1969, the center has produced reports on a variety of issues including the Interstate Commerce Commission, food safety, pensions and corporate welfare. He has launched other groups including Public Citizen, which is the largest of the Nader organizations. It was founded in 1971, and the umbrella organizations under it include Congress Watch, the Health Research Group and Global Trade Watch. Nader, a social critic and activist, has run for U.S. president. He continues to write and lecture about a variety of issues related to corporations and government.