“The Dog and the Dolphin,” “The Dog and the Jet Ski”… are you sensing a theme? James Dworkin, local children’s author, was inspired by his home in La Pore County and living on the shores of Lake Michigan to write his two books, and soon, many more.

He has one scholarly book called “Owens versus Players: Baseball and Collective Bargaining,” plus 99 professional articles and reviews.

The book, “The Dog and the Dolphin” was published in July 2014 and the one with the jet ski was published in 2016. He and his wife travel the state and have done around 200 public readings, including schools, libraries, hospitals, and just a few weeks ago, BellaBoo’s Play and Discovery Center.

Red, the Irish Setter dog in Dworkin’s books looks similar to Dworkin’s friend’s dog, Maggie who accompanies him on book signing tours, but the real inspiration for the novels came from a trip to Lake Michigan. He and his wife were living in Michigan City and were on the beach when they heard someone yell, “There’s a mad dog on a jet ski!” 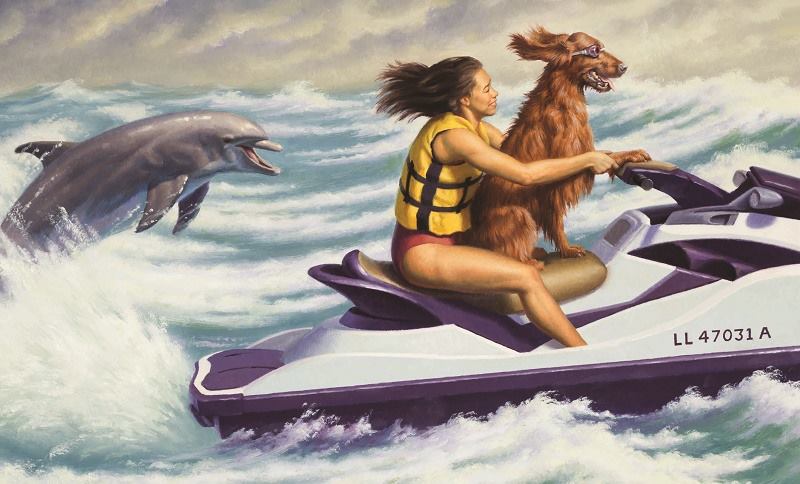 A dog was out swimming in the lake and a person on a jet ski had scooped him up when he had gotten pretty far out and had him on the jet ski with his paws on the handle bar, according to the author biography and summary.

There are personal touches within his books, with Dworkin’s five grandchildren mixed within the pages and the illustrator, Michael Allan Chellich even painted Dworkin on the beach on one of the pages!

You can find his books on Amazon.com, and stay tuned for the next book about Red and his adventures!

Go to Amazon to find the 5-star reviews on Dworkin’s books. Readers both young and old enjoy the book’s story and the beautiful painted artwork.

These are books with dogs, great moral lessons, and the beach! What can be more Northwest Indiana than that?

Follow Dworkin on The Dog and the Dolphin Facebook page to see where Dworkin will be next to read!