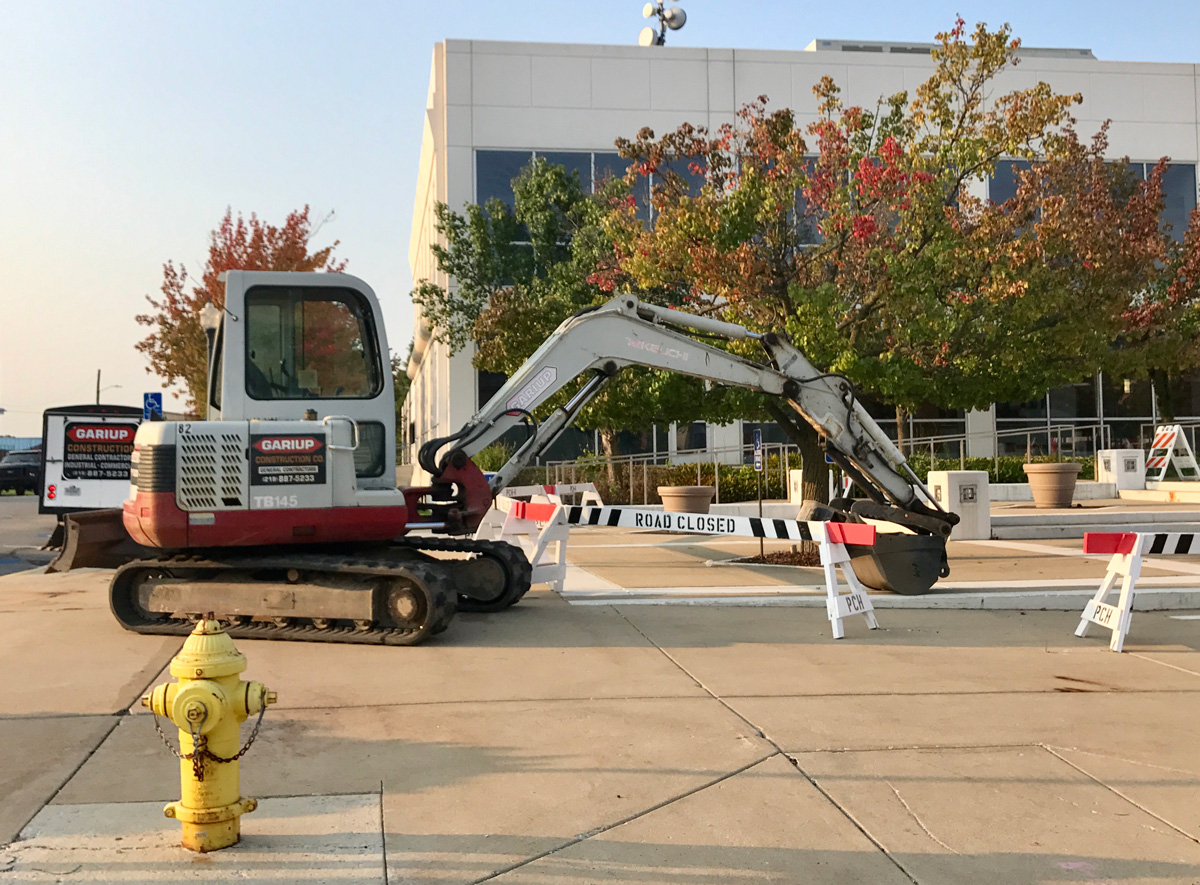 Less than two weeks after the bid was awarded, renovation of the entry plaza at the Porter County Government Administration Center began yesterday as Gariup Construction positioned its equipment and fenced off the area.

When completed, the new plaza will include a sloped walkway with lighted handrails that leads to the front doors, which was designed to be ADA compliant and easier for seniors to traverse. The walkway will include an underground heating system that will prevent ice and snow accumulation in the winter months, improving safety and reducing salt and snow removal costs. Also to be installed is an underground storage tank to collect stormwater runoff that will be used to irrigate the improved landscaping. This state of the art stormwater system will benefit the environment and assist the County in meeting their public education requirements as part of the Municipal Separate Storm Sewer System (MS4) Program.

The new plaza will also include several raised tree planter boxes. The concrete ledges around the planters can be used as seating during the warm weather months for people to come, eat lunch or just relax in the downtown area. The project will also include outdoor lighting around the entire Administration Center building for security and aesthetics.

“In addition to making the plaza more accessible, safer, ADA compliant and less costly to maintain, we wanted to make it a comfortable and welcoming place for people to gather,” said Commissioner Laura Blaney. “We are literally removing barriers to the Administration Center and inviting people to visit and enjoy what is truly their county building.”

The building is currently accessible through the front entrance via the current handicap ramp, but there may be a period of time when accessibility will only be available through the parking garage. The County will post any changes about accessibility on their website at www.porterco.org and their Facebook page.

Initially estimated at $1 million, the Gariup Construction bid came in substantially lower at $932,500. The plaza renovation is part of the Building For The Future Capital Upgrade Plan proposed by the Commissioners in July. This is the second of six projects in the plan that are already underway. The other project that the Commissioners have begun to implement is the replacement or rehabilitation of three bridges that are rated as the most deficient in Porter County.

“We spent over a year studying, evaluating and developing the Capital Upgrade Plan,” said Commissioner Jeff Good. “Now, we are moving full speed ahead to implement it. That is kind of pro-active government that the residents of Porter County deserve.”