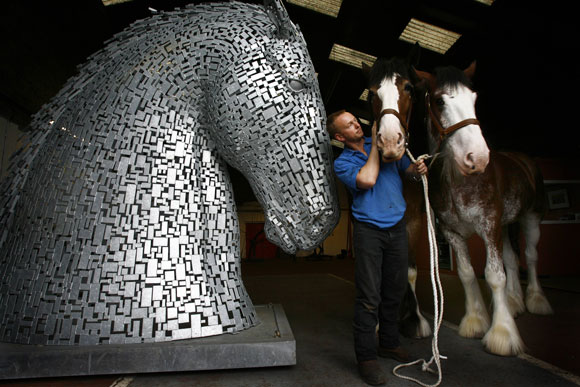 Purdue North Central is hosting an exhibit of "The Kelpies," a ten-foot model of two horse heads being constructed in Scotland by world-renowned sculptor, Andy Scott.

Scott, a graduate of the Glasgow School of Art, is known internationally for his welded steel technique, combining traditional methods and contemporary fabrication. Many of his works have been commissioned for public venues, and can be seen at Leeds, England; Belfast, Ireland; Byron Bay, Australia; as well as Edinburgh and Glasgow Harbor in Scotland.

The full-scale Kelpies stand about 100 feet tall and will be on display next to the Forth and Clyde Canal in Scotland. These dramatic kelpies reflect Scott's love of the horse, often a subject of his works, and have been commissioned to highlight a parkland regeneration project. 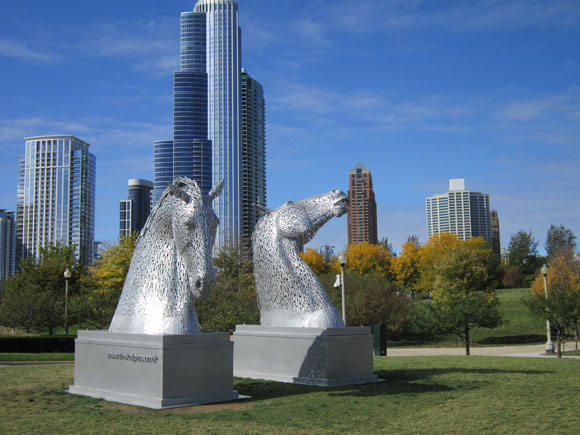 The kelpie name comes from Scottish mythological water spirits. The breed is a strong working horse, an ancestor of our iconic Clydesdale.

The remarkable exhibit is coming to PNC directly from its year-long display as part of the "2012-13 Chicago Parks Outdoor Sculpture Exhibition" on the grounds of Chicago's Field Museum. After its appearance there it was scheduled to move to New York City for a major exhibition, but a scheduling problem surfaced. This made it possible for PNC to display the sculpture until a large steel hauler will deliver it to its New York venue in the spring.

"The Kelpies" will arrive at the PNC campus on August 22 and will be on exhibit until mid-March. The sculptures are just one of many new pieces that will be part of the PNC 15th Odyssey Sculpture Exhibition which debuts on October 19.

Information about this exhibit or the Odyssey Arts and Cultural Events Series may be obtained by contacting Judy Jacobi, PNC assistant vice chancellor of Marketing and Campus Relations, at 785-5200, ext. 5593.

The traveling exhibit is sponsored by Creative Scotland and Visit Scotland .