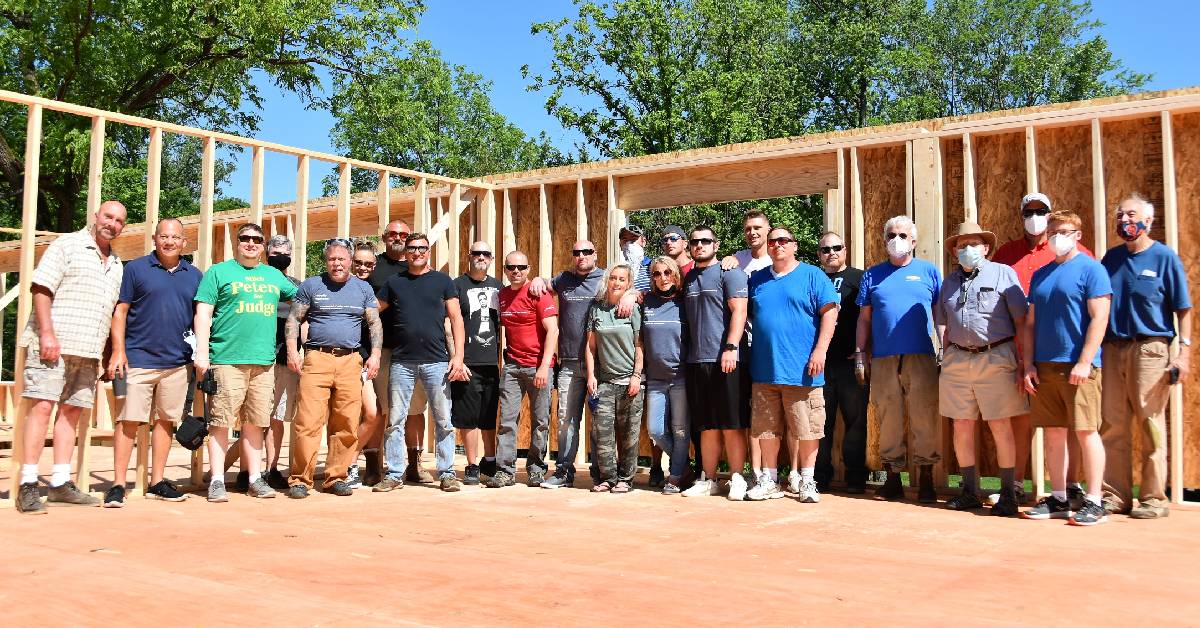 The foundation is considered to be the most important part of a building but little is ever considered of the walls. Composed of grit, determination, and life lessons, walls provide the continual support and shelter from storms.

For many, Respite House, a 15-bed halfway house in Valparaiso, Indiana, has provided that shelter. Since 2009, Respite House has provided a 12-step recovery program in a safe, structured, and affordable residential facility where individuals can be free of all mind and mood-altering substances, allowing them the opportunity to find a new way of life.

“It’s amazing what can happen here when drug addicts are truly determined to turn their life around,” said former resident, Herb Stepherson.

Stepherson has been a resident of Respite House four times. He credits his success to his time at Respite House and the local community. Since staying there for a year in 2016, Stepherson has given back any way he can. Having authored a book with a second one underway, Stepherson has given a TED Talk at Valparaiso University, has worked in collaboration with law enforcement, and other addiction agencies as well as school programs. He is even a consultant for the television show Intervention. The nationally certified peer recovery coach says he cannot take all the credit for his success.

“It’s been a lot of hard work. They did this. We did this. I have a lot of people in my corner,” said Stepherson.

Respite House has grown exponentially over the years. But with its success came a challenge. With only 15 beds, there is a constant wait list. Enter Paul Schreiner of Project Neighbors.

Project Neighbors provides affordable housing in Valparaiso. They recently bought two lots on Union street with the intention to build duplexes. While at a local gym, Schreiner had a chance conversation with Mitch Peters of Respite House. It was during that conversation, and follow up ones, that Schreiner learned what services Respite House provides and the positive impact it has had in the Valparaiso community. It was the consistent wait list of upwards 100 individuals that gave Schreiner pause. Project Neighbors had a plan for those lots but Schreiner realized there was one greater.

“From my conversations with Mitch, I was convinced this was a virtuous mission so we sold the lots to Respite House at cost," Schreiner said.

“This requires a lot of fundraising and community support and we could not have done it without all those involved,” said Peters.

“A building like this does not get designed at the kitchen table,” said Schreiner. "Jeff Lewis of Shive-Hattery enlisted his staff to design this at no cost.”

Lewis, himself a board member of Project Neighbors, recognized the importance of the project.

“This represents who we are. Project Neighbors is an organization that supports missions like Mitch and the Respite House's,” said Lewis. “For Shive-Hattery this absolutely aligns with our values of helping the community and helping those less fortunate.”

Thanks to fundraising and support of groups such as Horizon Bank, The Community Foundation, Urschel and many more, the work began.

With the excavation, foundation and framing completed by contractors, raising the walls was next. Normally, the walls would be built laying flat in short sections and then tipped up and fastened together. But, after a suggestion by the contractor, it was decided the raising of the  wall  should involve the community that has been so supportive.

“This is symbolic that nothing happens without community effort,” said Peters.

In order to demonstrate that, current and former Respite House residents gathered at the Respite House II site in the bright Saturday morning sunshine. Led by the professional framing crew, the volunteers tipped up the eighty foot finished wall in unison. Once the wall was secured, the volunteers posed for pictures and, led by Lewis and Peters, went on to see the work completed to date.

With heavy reliance on volunteers, Peters is optimistic the place will be completed by this fall.

“We contracted out the excavation, the foundation and the framing. From this point it’s pretty much volunteer work. We expect to be here six days a week," said Schreiner. “It will be done well, and it will be done with a lot of community involvement. It will be the most beautiful building in the neighborhood."

Peering up at the new wall, Stepherson was getting goosebumps.

“This place is going to change a lot of lives,” he said.

For more information about Respite House and its services, please visit their website at http://www.respitehouse.org/.