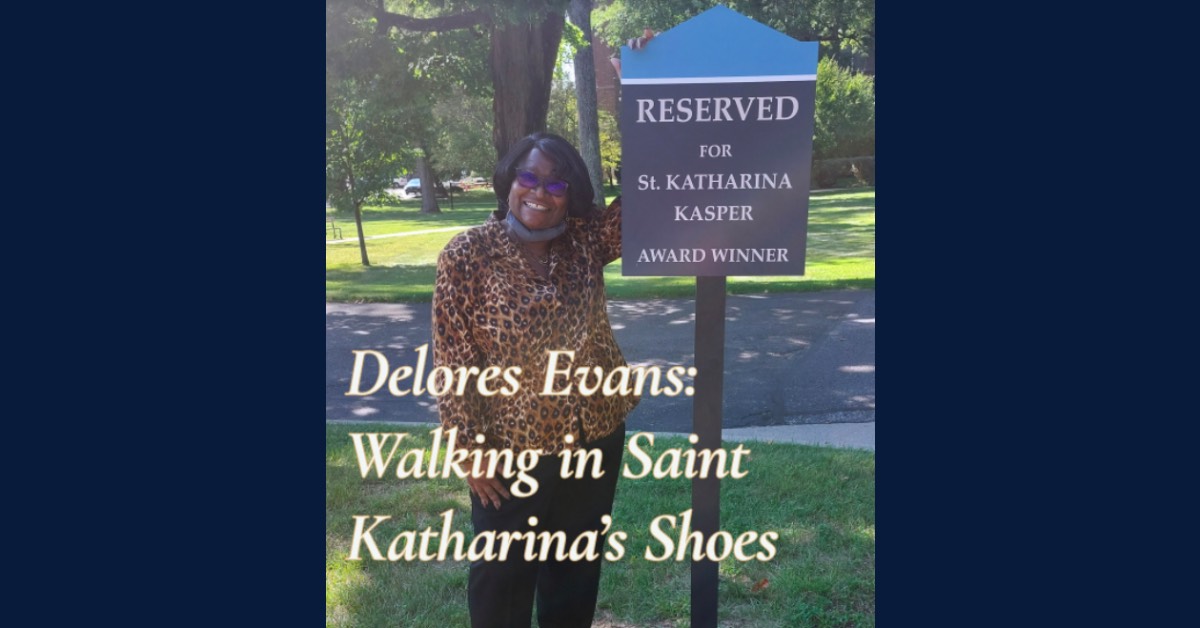 Although she was surprised when her name was announced as the 2022 recipient of the Saint Katharina Kasper Award, Delores Evans of Lindenwood Retreat and Conference

Center had a dream about the announcement earlier during the week of the event.  “I dreamed about what I would say if my name was announced, and then the dream ended.” Surprise and shock are how she described her reaction when her name actually was announced. “They had passed the Es (the award nominees were announced in alphabetical order), so I thought I didn’t get nominated this year,” she said. Then she saw her husband Bruce walk into Cana Hall, along with their daughter Dia Cooper and her husband Steven. “Seeing my husband walk down that aisle and seeing him smile, that was something,” she said.

“When I first came here, there were very few people who looked like me,” Delores said. The Sisters embraced me. In her acceptance remarks, Delores said: “When I first got here, I wondered, ‘Why did God send me here?’ Then I met all of you. He put me where I’m supposed to be.” Delores also discovered an interesting connection between the Sisters and herself and it’s Alverno College in Milwaukee, which she and many of the Sisters attended. “That tripped me out,” she laughed. Her love of the Poor Handmaids and their ministries has grown deeper over the 21 years of her ministry. “The thing that gets me about this order is that they go where no one else will and help those that no one else will,” she said. “If they see a need and they can fulfill it, they’re there,” Delores noted.

Lindenwood Director Paul Mach feels the same way about Delores, which is why he’s nominated her for the past three years. “She lives out the values the Sisters have,” Paul said. He cited Delores’ generosity to her fellow coworkers at the holidays and how when she receives a bonus or a gift, she immediately donates it back to the Poor Handmaids’ ministries. “She would’ve left years ago if she didn’t love me so much,” Paul laughed.

In announcing Delores as the 2022 recipient, Sister Shirley Bell shared some of the things her coworkers had to say in nominating Delores: “She’s a steadfast presence in a quiet, unassuming manner.”

“She works harmoniously with staff and is willing to share the load whether or not it’s in her job description.” And, “She’s a person of strong faith who listens attentively and acts.”

At the end of September, Delores transitioned to part-time, working occasionally at Lindenwood instead of daily. I’m not leaving them (the Sisters). If I was totally retiring, then I’d be sad,” she added.

The Center at Donaldson community is grateful you’ll still be around, Delores. Congratulations!