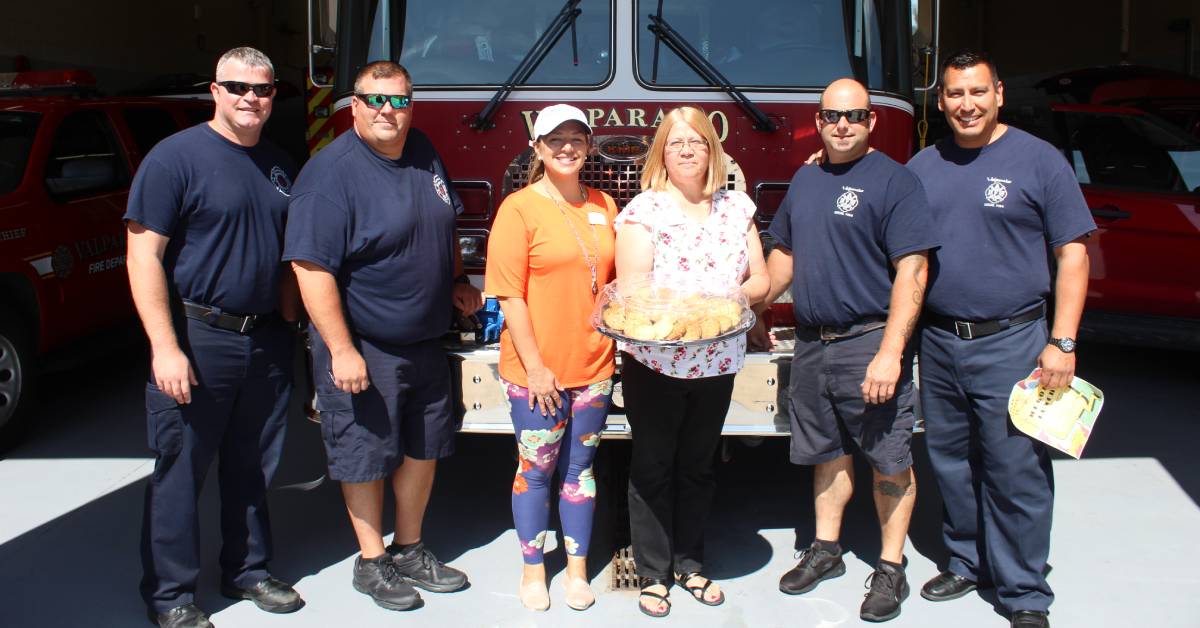 With the anniversary of 9/11 coming up, Rittenhouse Village at Valparaiso is getting ready to throw a party honoring first responders, their Heroes Lunch. Featuring a car show and cookout, Rittenhouse hopes to show their appreciation for our local heroes.

Though the big lunch itself is a little over a week away, Rittenhouse toured the city’s fire stations and police department – dropping off cookies and fliers highlighting the big day. As a senior living community, Rittenhouse shares a close relationship with the local first responders who often drop by their community for events and educational seminars for the residents.

“We’re just trying to show that we’re thinking about them and grateful for what they do every day,” said Karen Anderson, Recreation and Events Coordinator for Rittenhouse at Valparaiso. “Our residents will all be out there during the lunch as well, getting to meet some of those first responders. It’s about building a closeness with our community and showing appreciation for what they do for us.”

Rittenhouse’s first stop, Valparaiso Fire Station 2, is just about their next door neighbor. Crew members from Station 2 have visited Rittenhouse to inform residents about their senior services and even came by Christmas caroling one holiday season.

“It’s always nice to be shown appreciation, we don’t always get ‘thank yous,’ so these cookies and the luncheon are great,” said Clint Gorball, a Lieutenant at the Valparaiso Fire Department. “We don’t do this for the thanks or the recognition, but it’s always good to hear.”

The Rittenhouse team then moved on to Valparaiso Police Department, where Police Chief Jeffrey Balon accepted the gifted cookie platter.

Balon also praised the work and services that Rittenhouse provides to the senior community.

“I think they’re outstanding, sometimes our elderly citizens are the ones forgotten,” he said. “So I think it’s nice to have establishments that focus strictly on their care and wellbeing.”

The Heroes Lunch is on September 11 at Rittenhouse, 1300 Vale Park Road, and will feature barbeque, a car show from the Winamac Old Car Club, and appearances from many local heroes. Visit www.rittenhousevillages.com/senior-living/in/valparaiso/rittenhouse-village-at-valparaiso/ to learn more about Rittenhouse Village at Valparaiso.