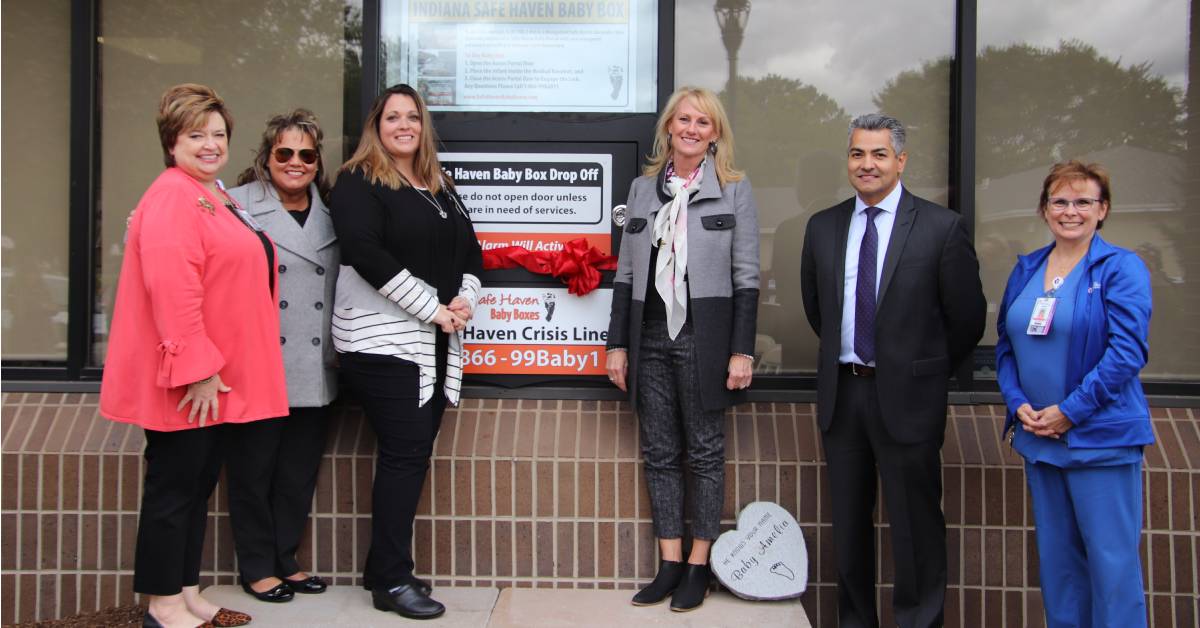 On October 16, St. Catherine Hospital in East Chicago partnered with the founder of Safe Haven Baby Boxes to unveil and bless a device that enables mothers in crisis to anonymously surrender their babies into the arms of medical professionals to help ensure the child’s well-being and safety.

It was the first baby box installation at Community Healthcare System facility and the third in Northwest Indiana.

Attending the blessing at the St. Catherine Hospital campus, in addition to hospital staff, were leaders from police, fire, emergency medical services, mental health providers, city officials, clergy, the Sisters of the Poor Handmaids of Jesus Christ and not-for-profit groups that serve women during and after their pregnancy.

“The baby box we are unveiling today is part of our ongoing mission to protect the most vulnerable at a critical time in their lives,” said Leo Correa, CEO, St. Catherine Hospital.

Located in the west wall of the hospital near the Family Birthing Center, the baby box is climate-controlled, offering heating and air conditioning. Once the baby is placed in the secure bassinet, a silent alarm sounds to notify birthing center personnel.

“We are proud of the healthcare initiatives and partnerships that our Community Healthcare System hospitals have in place for pregnant and parenting families to keep babies healthy and safe,” Correa said. “But we also recognize the hurdles can be so significant, moms who are in crisis need to know there is a safe place to hand over the newborn baby to the nurturing arms of others.”

“The three state zip codes with the highest rates of infant mortality are right in our backyards,” Puntillo said. “We have to do better, we have to get those numbers down - starting here.”

Puntillo, co-recipient of Indiana Hospital’s 2018 Caregiver of the Year Award, is a champion advocate for infant safety, leading the charge through “Back to Bed” and “Safe Sleep” campaigns that educate parents on the best sleep practices for babies and help prevent Sudden Unexpected Infant Deaths, or SUIDs. Puntillo described the baby box as a beacon of light and hope in someone’s darkest moment. She challenged everyone to channel that light through advocacy and actions to spread awareness about this resource.

“We want to ensure that every baby in Lake County has a first birthday,” Puntillo said. “Let’s come together a year from now to have a big first birthday party for children who have been given this chance to live.”

Monica Kelsey, founder of Safe Haven Baby Boxes, Inc., affirmed the necessity of the program: Among the 16 existing baby boxes installed in the states of Indiana, Ohio and Arkansas, 59 babies have been rescued. Kelsey herself was abandoned as an infant in 1972, when no safe haven law protected her birth mother.

“Every child that is placed in this box will be loved and cared for the rest of their lives,” Kelsey said.

Linda Znachko, founder of He Knows Your Name ministry, became an advocate for the Safe Haven Baby Boxes mission in 2009. After the body of a newborn baby was discovered in a dumpster in her hometown of Indianapolis, Znachko said she founded the ministry to ensure every child receives a name in life, and dignity and honor in death. In 2014, Znachko had a proper burial for a baby found abandoned in Indianapolis’ Eagle Creek Park; she named her Amelia. The logo on every Indiana Safe Haven box features Amelia’s footprint.

“Every mother is going to have to use her very own feet to walk her baby to this box, and that’s why this stone is here,” Znachko said. She said it is her hope the stone will serve as a reminder to mothers that their choice, though painful, will give their children a chance to be named and nurtured.

Paula Swenson, Chief Nursing Officer, St. Catherine Hospital, thanked Tracy Sharp, RN, who saw the project through and all the donors at the event. She also extended thanks to first line responders, city officials and nonprofit groups for their support.

“It wasn’t by just one set of hands, but thanks to a truly combined effort that we are here today,” Swenson said. “We are happy to give mothers and caregivers in crisis peace of mind that their baby will be cared for in their days and years to come.”

Deacon Michael Halas, of Pastoral Care at St. Catherine Hospital, formally blessed the baby box and Kelsey unlocked it, signaling the start of a new life-saving charge for Northwest Indiana and Chicagoland.