By: Opportunity Enterprises Last Updated: May 1, 2012 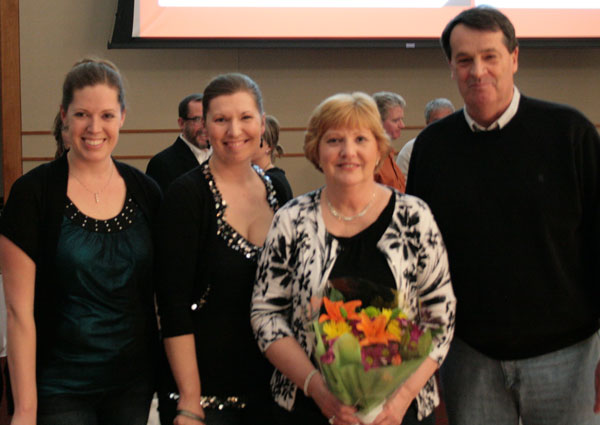 Sally Gaff, Director of Opportunity Enterprises’ Early Intervention Program All About Kids, has won the United Way of Porter County Success by Six Service to Children Award. The award, which was presented at an awards ceremony on March 15, is given to a Porter County resident who provides leadership in the Early Childhood Field.

Gaff, who has worked in the field of early childhood development for over 20 years, consistently demonstrates absolute dedication to serving young children and their families with the most excellent service possible. Not only is she an outstanding director of her own program, she has served in leadership roles both locally and statewide.

In her role as Director of All About Kids, Gaff is a strong leader who models an authentic concern for providing the best way to serve families for the families’ sake, and is actively involved in implementing the changes that frequently come about through First Steps.

Despite the frequent changes she deals with, Gaff remains a supportive and participative leader for her staff. One staff member shares, “Every time there is a change at the state level - big or small - Sally encourages us to make the best of it, and move forward. She often tells us that we have to remember ‘we have to do the best we can with what we have, because that's what's best for our kids and their families.’ Sally demonstrates the ability to be flexible with changes in programs and still puts the needs of young children first. While she has had to manage much change in First Steps programming, Sally remains a strong leader that I am proud to work with.”

In addition to leading her own staff, Gaff’s leadership extends well beyond her own program, and she is a leader both throughout Northwest Indiana and statewide. Other professionals in the field regularly seek out her opinion and help on a variety of issues, and providers in Northwest Indiana often call and ask her opinion or advice.

At the state level, Sally attends monthly meetings in Indianapolis to provide representation for Porter County in the way the First Steps program is administered statewide. She has also served in leadership roles with First Steps, including helping put together a survey that was sent to providers to determine how to improve the new First Steps networking and reporting systems. In addition, Gaff is involved with INARF (Indiana Association of Rehabilitation Facilities), and has been involved with the Success by Six program.

Throughout her career, Sally’s philosophy has been simple – ALWAYS put the needs of the children and their families first. Everything she does is driven by that concept. Sally has assisted in providing scholarships for kids needing help to attend play group, an important piece of the developmental puzzle for children. She also facilitates providers working with each other for the best benefit of the child and their family, and understands the difficulties families with a child with special needs encounter, thereby making it easier to provide comprehensive and coordinated services to these kids. In addition, Sally regularly seeks out ways to find out how to transition kids in and out of the First Steps system with all of the child's needs met.

The impact Sally has had on the early childhood field both locally and statewide is hard to measure, and the value of the stability she has provided for so many years and through so many changes is difficult to quantify.

One longtime AAK therapist shares, “Sally is a steadying force and a moral compass in the area. I think people know that Sally will follow the rules but also do what's right and what's best for families, and many follow her lead.”

All About Kids, the early intervention program of Opportunity Enterprises, has been providing a variety of developmental services to thousands of children throughout Northwest Indiana for more than three decades. Services include in-home early intervention therapies for children needing assistance with motor skills, language and cognitive development, and social interaction, as well as integrated play groups for children led by a therapist. For more information, visit www.oppent.org.

About OE
Since 1967, OE has been a non-profit organization which enriches the lives of individuals with disabilities by providing exceptional support and creating meaningful opportunities that allow its consumers to serve as an inspiration to the community. Today, OE serves 1,100 adults and children with disabilities in Porter County and throughout Northwest Indiana. For more information, visit www.oppent.org.