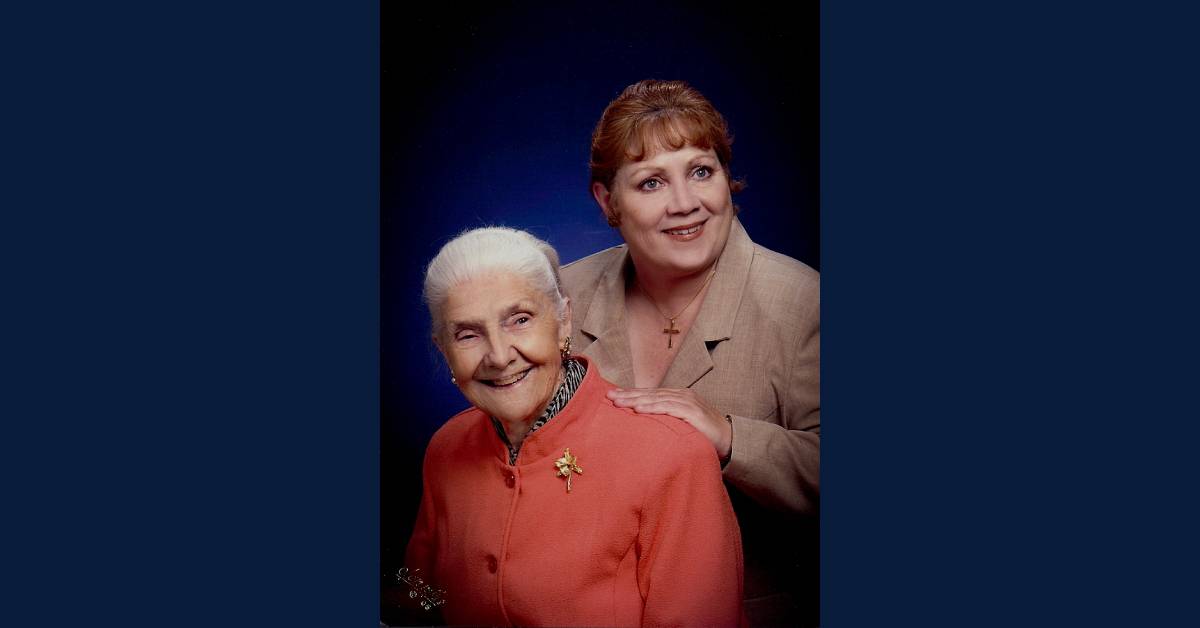 Of the many things Sandy Macleod learned from her aunt and godmother Esther Ramsay, the value of the shared experience is one she most treasures. So much so that she’s become a fixture in the Memorial Opera House audience on typical weekend afternoons, occupying her regular seats (front row, three seats on each side of the aisle, each with optimum legroom) with several of her closest friends. The friends who attend with her rotate, but Macleod is always ready to claim one of the handful of season tickets she’s been purchasing since 2007.

The Memorial Opera House staff, volunteers, and cast members have come to recognize Macleod as one of their fiercest loyals, and not just because she has the best seats in the house. Her infectious sense of humor, penchant for storytelling, and ability to treat every person she meets like a close confidant draws people to her almost instantaneously. After retiring from 42 years of employment at a steel mill (she was the first female crane operator in her division and spent 20 years on the safety committee, among other feats), she enjoys spending time focusing on life’s little joys. It’s easy to see why her tradition of sharing fun outings to the theater, her treat, is as much a part of her as her turn of phrase.

But Macleod credits this tradition of hers, and her appreciation for theater, almost entirely to Ramsay.

“It was a gift from her, ever since 2002 when we first came to a show at the Opera House,” Macleod said.

Macleod has childhood memories of seeing plays often with Ramsay, down in Florida where she used to live and later in Michigan City.

“Ever since I was a child I have loved movies and plays and everything entertaining. Mother used to call me Sarah Bernhardt, because I loved being dramatic, and that’s still true, to some extent,” Macleod said, drily. “Aunt Esther always nurtured that.”

Shortly after the World Trade Center tragedy on September 11, 2001, Macleod’s cousin in Fort Wayne expressed concern over Ramsay living alone. Ramsay was a retired naval Captain, and the additional stress of the event on her aging worried her family. Rather than have Ramsay turn to an assisted living facility, Macleod encouraged her to move into her own 3-bedroom apartment with her.

“Now, my aunt and I were about as different as night and day in some ways,” Macleod laughed. “For instance, her room was always all shipshape tidy; my room always looked like it was on a curve. But she was happy, and safe, and I got the privilege of sharing the last years of her life with her. It’s not something to take for granted.”

“The thing about Memorial Opera House is, it’s not just a play you’re watching—it’s about courage. It takes courage to get up there, and transport your audience someplace else,” Macleod said. “Even if it’s not your favorite play, you have an amazing time watching every one of them.”

One of the differentiators about Memorial Opera House, in Macleod’s eyes, is the way everyone there caters to that communal experience, recognizing people’s birthdays and anniversaries, paying special attention to their regulars, and welcoming newcomers all at once.

“It’s amazing what they do to engage the audience and take an extra moment to say hi,” she said. “There’s a level of appreciation and concern with Memorial Opera House. People don’t take [their work] for granted, not just in terms of the level of entertainment, but as part of their history and reputation in downtown Valpo.”

One particular night from December 2006 stands out to her. She and Ramsay went to see “Mame,” and were particularly looking forward to seeing an acquaintance they both knew in the starring role.

“When we found out she was playing the lead, Aunt Esther was really excited because she knew someone in the play. We went and we had a ball! The whole place was laughing, and we all gave a standing ovation at the end. Listen, we go to the afternoon shows, and do you know how hard it is to get a whole bunch of old fogeys like us on our feet? So you know it was a great show!” she said.

After the show, the actor who played Mame came and found Macleod and Ramsay.

“She handed Aunt Esther flowers, just because,” Macleod said, her voice becoming thick. “And that was a really special moment, because the next March she was gone.”

After Ramsay passed away in spring of 2007, Macleod continued her tradition of purchasing season tickets to Memorial Opera House, and is always ready to share them with a friend.

Since sharing her appreciation for the communal experience of seeing a show, several of her friends have come around to her way of thinking, too. Macleod let out a belly laugh when she recalled giving a friend tickets to see “Shrek the Musical” for her birthday.

“This friend of mine, she loves Pink Floyd, she’s a diehard fan; she wears skull earrings; she lives and breathes by Harley-Davidson. She’s the last person you’re going to see at a friggin’ play! And guess what? She had the time of her life! The Donkey came up and talked to her, and she almost fell out of her seat. She still talks about it,” Macleod said.

Macleod made extra assurances that her friend, Sharon Biggs, gave Macleod permission to publish the fact that she is now a theater fan.

“What she thought was the weirdest gift in the world completely converted her,” Macleod laughed.

Other friends have found solace in attending shows with Macleod, such as a friend who had recently lost her father and found the performance she was watching to be a much needed escape. This catharsis for audience members and performers alike is one of the many reasons, Macleod stressed, why people should support artistic ventures like Memorial Opera House.

“You know, it’s great to sit on your butt and be entertained, but by God it takes money and it takes a commitment. Aunt Esther knew that, and she encouraged that,” Macleod said. “I’ve watched these guys [at Memorial Opera House] take what they’re given, and, like yeast when you’re making bread—not that I’ve ever made bread, but I would be interested in making cinnamon bread, and I think this is the basic way yeast works—they make it grow. They work with what they’re given and make it grow for the better.”

“Kids need this outlet. Not all of us are athletes! We have a responsibility to the next generation to [teach them] more than just how to hit a button on a video game. We need to teach them to use their imaginations and to grow as people,” she said.

Macleod admitted she’s a little jealous when it comes to the opportunities children have at Memorial Opera House.

“We didn’t have that kind of outlet available when I was little! Truthfully, for two cents I’d love to be up on that stage, but I don’t have the talent. I’m sure there’s a frustrated actor inside of me, like most people who love the theatre. I’m sure you could tell by now I can tell a fairly good story,” she quipped. “But I appreciate the people who do have what it takes—I appreciate the courage they have to get up there and do it.”

For her part, Macleod is going to donate the money she spent on tickets to “9 to 5” and “Matilda,” both performances which have been postponed indefinitely due to the COVID-19 pandemic. She encourages other patrons to do the same to help support Memorial Opera House during this precarious time.

And while she brushes off the idea of ever performing onstage, readers will surely agree that she shouldn’t be so quick to dismiss the notion. Until then, though, you can expect to see her carrying on the tradition her aunt gave her.

“Esther always bought at least two tickets, and always used one to invite someone else. I’ve carried that tradition on. It’s a memory and a blessing. When the time comes and I’m gone, I hope someone else carries it on, too.”

Visit https://www.memorialoperahouse.com/ to learn more about this historic home to many devoted patrons.