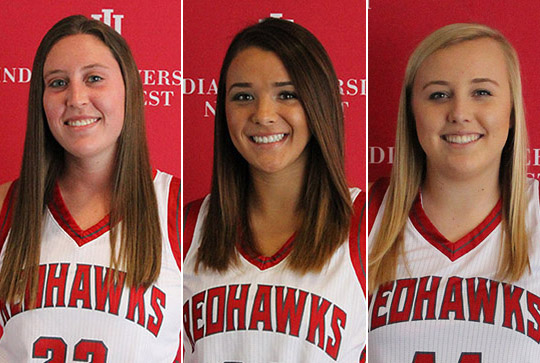 It was a tale of two halves in a Top 25 clash between No. 21 IU Northwest and No. 23 Madonna on Saturday in the RedHawks’ home opener at the Savannah Center. With IU Northwest star guard Grayce Roach saddled with three early fouls and IU Northwest struggling to score, Madonna quickly erased the RedHawk 9-2 run to begin the game and used a sharp transition game to open up as 12 point second quarter lead. The RedHawks rode the strong post play of sophomore forward Kelsey Gushrowski and rallied late in the half to cut the Madonna lead to just six at the break.

With Roach back on the floor RedHawks started strong in the second half scoring on the first possession and the tallying the first seven points of the half to regain the lead at 32-31. From that moment on it was all RedHawks as IU Northwest would outscore the Crusaders 26-12 in the third quarter and open up a twenty-point advantage en route to a decisive 74-58 victory.