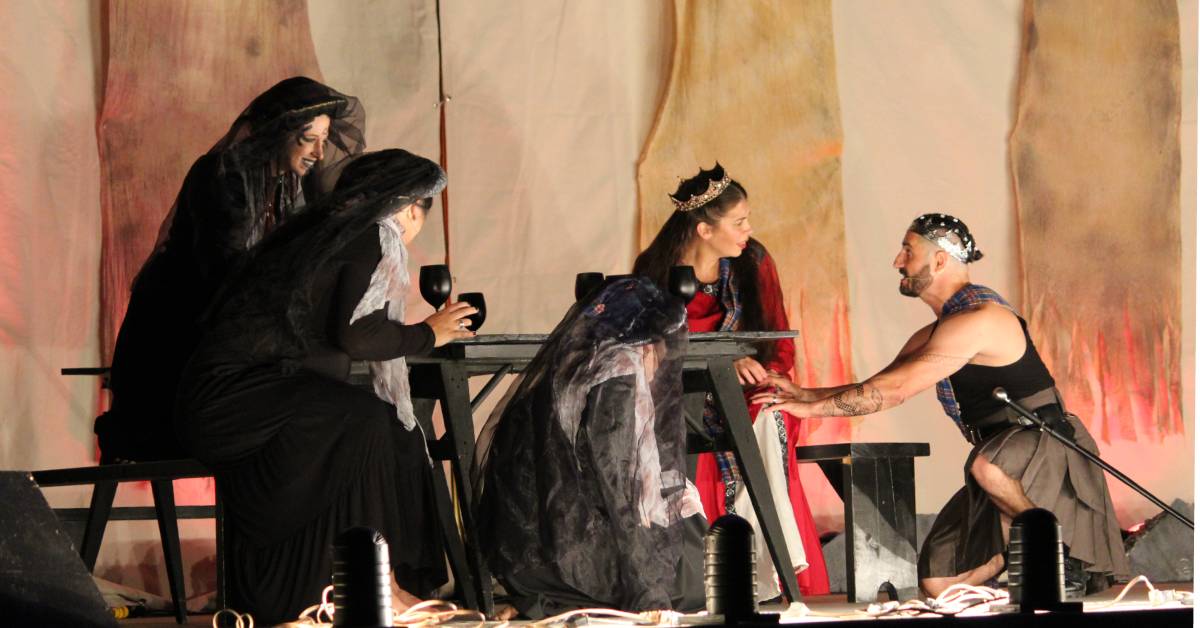 Chicago Street Theatre enchanted the city of Valparaiso with a night of Shakespeare under the stars Thursday evening at Central Park Plaza. The performers,however, were the brightest stars of all on the stage of Porter Health Amphitheatre with their rendition of Macbeth. Attendees enjoyed this free program with blankets, folding chairs, and dining from Martinis, Valpo Velvet, and Chicagoland popcorn.

The 8th annual Shakespeare in the Park began at dusk and directors Barbara Baker Malangoni & Daena Sisk were glowing with pride when speaking of the cast and crew. The directors relayed that the dedicated cast of 14 actors practiced four nights a week starting in spring. Set design and construction were done on the weekends and a total of 30 people poured their hearts into this epic two-night show.

“Everyone worked their butts off for a great production and I feel so lucky,” Baker Malangoni said. “A lot of time, energy, and love went into this.”

The directors first met on the set of The Triumph of Love and have been friends ever since. Macbeth is their second co-directorship but they have performed in many shows together. Their bond is evident through the execution of the play. From set designs, to sound, and costumes, the directors collaborated to showcase the beauty within Shakespeare's 1600s classic. They were especially passionate about the well-rounded characters.

“We believe Macbeth is a tragic hero and not a villain,” Baker Malangoni said. “His ambition has guided him to a bad place and he is a relatable character. In fact, every character is a whole human being in this show.”

Set in ancient Scotland, Macbeth recieved a prophecy from three witches. The audience watched Macbeth unravel into madness, consumed by guilt. Chicago Street Theatre’s actors were captivating, and even with the trickiness of Old English, the actors’ talents made the storyline interesting and easy to follow. With pyrotechnics, special effects, choreography, and even sword fights, there was never a dull moment.

According to Mary Bird Matern, Chicago Street Theatre enjoys giving back to the community by providing an outside theatre experience. Bird Matern has been involved in theatre for over 30 years and noted that the 8th annual Shakespeare in the park is a well-oiled machine.

“Outside theatre is a whole different animal,” Bird Matern said. “Anything could happen in live theatre but you add wind and everything else from outdoors, it is a unique experience.”

Marcia Burbage has been a volunteer at Chicago Street Theatre since 1968. She moved to the Valparaiso area as a pharmacist, and a co-worker invited her to dinner. It is there she accepted the role of volunteer and loves it, especially when she can share her lighting expertise with children. Building and taking down equipment after every show has its challenges, but Burbage hopes that newcomers will see the show and be inspired to check out the theatre.

Chicago Street Theatre has something for everyone, such as, volunteer opportunities, education, concerts, and a diverse show line-up. There is always something new to discover. Some upcoming shows are “A Wrinkle in Time” August 23rd-September 8th and “Toxic Avenger” October 4th-October 2019 (Auditions for “Toxic Avenger” is on August 11th from 5pm-7pm). There is also one more chance to catch Macbeth at the Central Park Plaza on Friday, July 12th at dusk.

To learn more about Chicago Street Theatre check out their website at: https://chicagostreet.org.